Archaeologists don't usually get too excited about ancient artifacts dug up during construction work in Athens, but this Hermes head might be different. 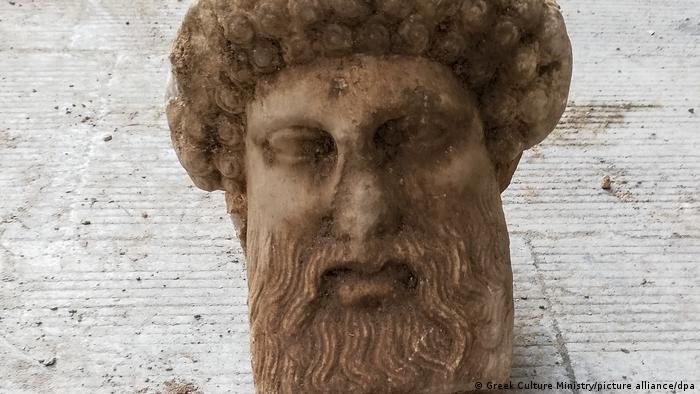 A mere 1.3 meters (4.3 feet) under the pavement in Athens' busy Aiolos Street pedestrian area, workers found a sculpture, a Hermes head, while working on a sewer. The world learned about the find on Saturday when Mayor Kostas Bakoiannis, whose offices are nearby, posted a photo of the artifact on Facebook and wrote "Unique Athens."

The Greek archaeologist, who for years took part in excavations in the streets of Athens, said even today, heads large and small, statues, vases or graves are discovered, often at a depth of only 35 centimeters. "But a find as important as the Hermes head has not been made recently." 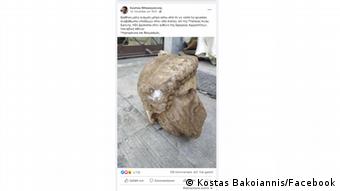 Mayor Kostas Bakoiannis posted a picture of the head on Facebook

Archaeologists are currently examining the head for indications it was made by a well-known sculptor of the ancient world, which would be a sensation. They are keeping a lid on their work until the Culture Ministry gives its final expert opinion.

Spathari, who has written various books on antiquity, also refrained from speculation. "It is too soon to draw conclusions, but this head does indeed bear similarities to an important exhibit in the Benaki Museum in Athens," she said, adding it would undoubtedly be special if the head came from the workshop of a well-known sculptor.

According to a first assessment by the experts, the Greek god's head used to rest on a square column that, in ancient Greece, was set up at street crossings: basically a signpost, as streets did not have names at that time. The marble head "depicts the god Hermes at a mature age and is original artwork dating from late 4th century BC or early 3rd century BC," the Greek Culture Ministry said in a statement. 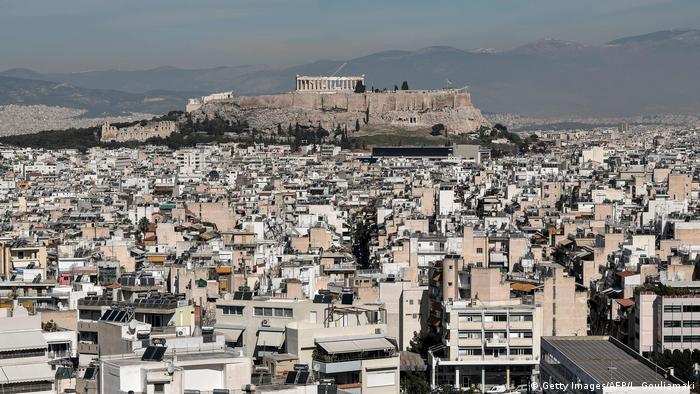 In Greek mythology, the winged messenger Hermes was the patron saint of travelers and merchants. It would not come as a surprise if a column topped by a Hermes bust had stood at a crossroads near what was the commercial center about 2,500 years ago in what is today the city's historic center.

The head found on Aiolos Street, which connects the central Omonia Square with the Old Town and offers a magnificent view of the Acropolis, was "used as a common building material in a wall that served as a water supply, perhaps to support a water pipe," Spathari said. "During the Christianization of Greece, antique steles, heads or statues were often used as building materials for maintenance work on streets."

During the construction of the Athens subway years before the city hosted the 2004 Olympic Games, many very interesting finds were unearthed in the city center. The archaeologists who kept a close eye on the underground construction work in a project that spanned about 70,000 square meters were delighted — in the past, such extensive underground excavations were simply impossible in Athens, one of the most densely built-up cities in Europe. 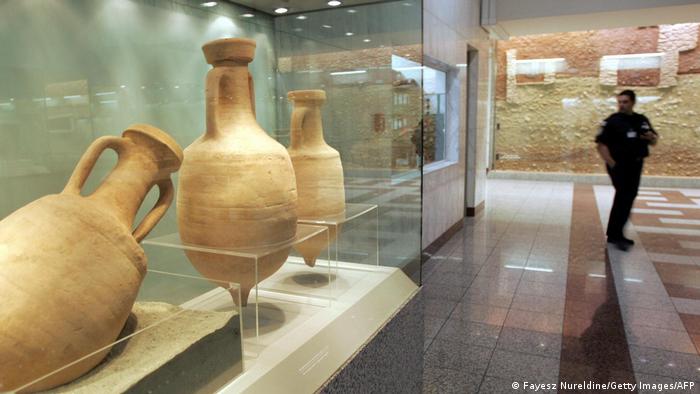 Artifacts are on display at the Syntagma subway station, among others

Quite a few accidental finds in Athens are lost forever, as construction workers can often be quick to cover up any ancient artifacts they come across during new construction or maintenance work, sometimes even with concrete, to prevent archaeological authorities from stopping construction. The authorities are known to take their time to check whether excavations might be worthwhile or whether construction can continue — a horror scenario for the building owners, who stand to lose a lot of money.

Countless times, archaeologists have halted the excavation work that crisscrossed the Greek capital for years. They found almost completely preserved ground plans of ancient or Byzantine districts, streets, sewers and cemeteries. To date, the layers of earth beneath the city of Athens have provided some 50,000 finds, including statues, mosaic floors, urns, vessels and everyday tools.

The most extraordinary items found during the construction of the metro are exhibited in various Athens museums, including of course the Archaeological Museum. Others are showcased in select downtown subways and train stations not far from where they were originally found — a very special experience for passengers waiting for the next train.

Archaeologists are carrying out an urgent excavation because the site in Uri canton is at risk of washing away with a melting glacier. Experts have found evidence that people were searching for crystals 10,000 years ago.