Women's Bundesliga: The power and plight of Turbine Potsdam and Leverkusen

While Turbine Potsdam and Bayer Leverkusen have opposite approaches to women’s football, both clubs are stuck in the same plight. How do they catch up in a league that has two teams so much bigger than the rest? 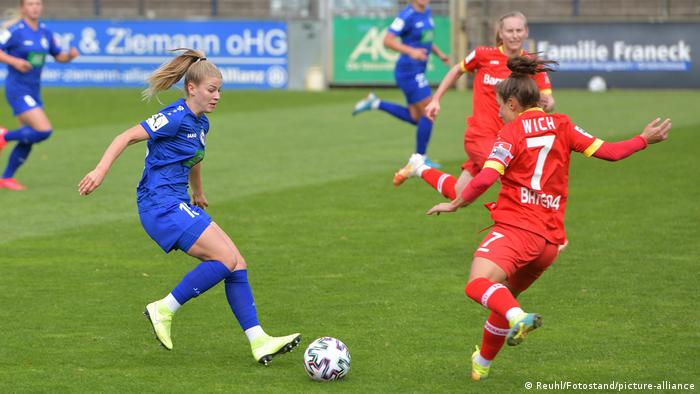 Turbine Potsdam's 2-0 win over Leverkusen in Women's Bundesliga on Sunday could have been a snapshot taken at nearly any point in the last decade.

Potsdam, one of Germany's most storied women's clubs, beating a less established Leverkusen is no surprise, but the result obscures a greater truth. That two top-flight teams in Germany with two different approaches to the game find themselves in the same predicament.

Turbine Potsdam are one of the most successful women's teams in Germany. With six league titles and two Champion's League victories to their name, they used to revel in the overwhelming dominance currently attributed to Wolfsburg. They won the league four times in a row between 2009 and 2012. Since then though, they've been left to watch on as Bayern and Wolfsburg have turned into powerhouses.

A regulation win against Leverkusen no longer sparks talk of a title race, as head coach Sofian Chahed alluded to afterwards. "We don't see ourselves in the title race, but more in the upper third."

Part of that might be due to Potsdam's increasing outlier approach to the rapidly-intensifying trend of women's Bundesliga clubs merging with men's sides. They maintain their proud identity as a solely women's club even as rivals 1. FFC Frankfurt merged into Eintracht this summer, and as Dortmund and Schalke, respectively, founded women's sides.

The approach has seen resources flood into the women's game in Germany, which many view as having stagnated in comparison to other European countries.

"It's definitely a positive," former Bundesliga and Germany player Verena Hagedorn told DW. "When it comes to marketing or wages, German clubs are still behind England or France, but the trajectory is clearly an upwards one." 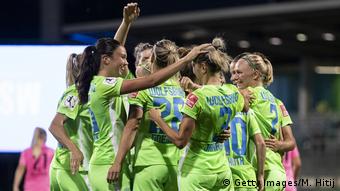 How do you catch up to a team like Wolfsburg?

Leverkusen, a struggling women’s squad in a bigger men’s club, cut a clear contrast to Turbine Potsdam. However, they have provided 12 years worth of proof that being part of a men's club does not automatically dictate success. The team has never finished higher than 7th place since their founding in 2008 and spent 2017-18 in the second division.

Perhaps change is ahead for a team regularly fighting to stay in the division. Leverkusen had won their first two matches of the season and coach Achim Feifel was adamant that the club was on the up.

"Overall, we have more resources at our disposal," Feifel said afterwards. "Especially in our infrastructure. In the coaching team and so on. Things are happening there, in terms of team building as well."

WOLFSBURG, BAYERN, AND EVERYBODY ELSE

Hagedorn, who was once head coach at Leverkusen, now works for the area's local FA. Though she praised their facilities, she was keen to remind of the gap between the top and the rest of the league. 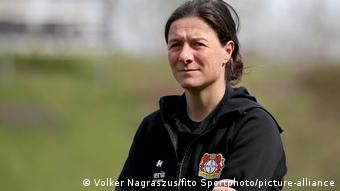 "There is still a mix of fully pro players and semi-professional players, but that's the case for many teams," Hagedorn said. "There are 2-3 clubs that are clearly ahead of the pack, and I hope Leverkusen can take that step in the future."

Potsdam and Leverkusen may have significantly different structures and histories, but in their current, converging forms neither look remotely capable of breaking Wolfsburgand Bayern's stranglehold on the league.

Though the Turbine fans were overjoyed in their side dismantling Leverkusen, if they ever want to celebrate another title, more will have to change in the Bundesliga than the occasional scoreline on Sunday. The plight of the visitors demonstrates it's not just about being connected to a men's side or having a strong history, but rather more resources and a greater commitment to the women's game.