Women lead at the Bayreuth Festival

The festival opened with an electrifying staging of Richard Wagner's "The Flying Dutchman," with singer Asmik Grigorian and conductor Oksana Lyniv outshining the men. 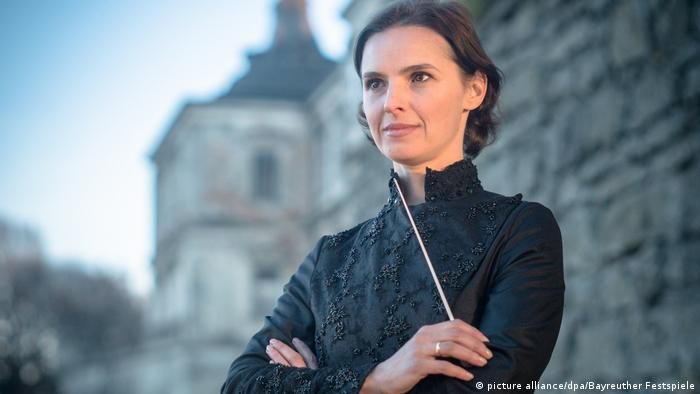 Police guarded the access roads, and bags were checked. Only those wearing colored wristbands were granted admission, based on prior registration and a negative COVID test. It was also mandatory for the audience to wear FFP2 masks.

Typically, the annual Bayreuth Festival in Richard Wagner's Festspielhaus — or the Bayreuth Festival Theater — attracts more than 60,000 visitors from Germany and abroad. This year however, only 911 seats of 1,974 are being filled for every performance, with audiences seated apart from one other in a checkerboard pattern. Angela Merkel, a Wagner fan, attended the Bayreuth Festival in her last year of office as German Chancellor

However, the audience's resounding applause was reserved mainly for two women: Ukrainian conductor Oksana Lyniv and Lithuanian singer Asmik Grigorian, who plays the role of Senta in this year's opening opera, The Flying Dutchman.

Grigorian wowed the audience with her magnificent vocals, while Lyniv made history by becoming the first woman to conduct the orchestra in the festival's 145-year run — a fact that reportedly also pleased Merkel. The 43-year-old conducted the orchestra for a new interpretation of The Flying Dutchman directed by Russian Dmitri Tcherniakov.

The Flying Dutchman: a synopsis

As in many Wagner operas, "redemption" is a major theme in The Flying Dutchman — in this case, a man is redeemed from fate by the unconditional love of a woman.

The Flying Dutchman is a former sea captain who is condemned to roam the seas for having made a deal with the devil. However, every seven years he is cast ashore, and if he wins the love of a faithful woman willing to sacrifice her life for him, he will be released from his curse. Tempted by the Dutchman's wealth — and unaware of his true identity and destiny — a Norwegian sailor named Daland agrees to give the Dutchman his daughter Senta's hand in marriage. 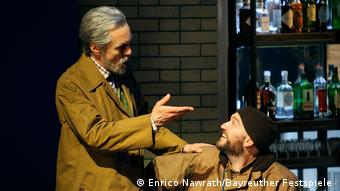 Senta happens to have long been fascinated by the legend of the Flying Dutchman. When her father introduces the stranger to her, she immediately promises her eternal fidelity to the mysterious man. However, the Dutchman later overhears a bitter argument between Senta and her former boyfriend, Erik, who still loves her.

Convinced he has been betrayed, the Dutchman reveals the nature of his curse before setting sail again in his quest for redemption. Desperately in love, Senta throws herself into the sea, thus saving the Dutchman's soul.

In later reworked versions, Wagner had the two ascend to heaven, alluding to the romantic notion of unconditional love in death and beyond.

However, director Tcherniakov has dispensed with this ending, as with Wagner's mysticism in general. There is also no ship in the whole opera. Tcherniakov's stage instead reflects the cool atmosphere of a black-and-white 1960s thriller. The brick houses of the village have a lifeless feel, even when the sailors set up their folding tables and chairs in front of a drinking hall. 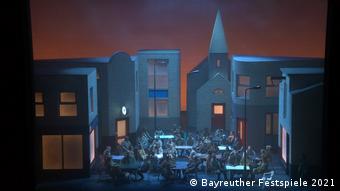 The dreary village, home of the Flying Dutchman

There's even a sadness to the women's choir rehearsing their singing in the street with Senta's governess, Mary (Marina Prudenskaya), and the color scheme is muted. Only Senta, with a striking red and blue streak in her hair, stands out from the crowd with her hoodie and her exuberant movements.

Senta as a rebellious teenager

"My Senta is an angry teenager, maybe between 14-15 years old. She reminds me of myself at that age," Grigorian told DW.

At times Senta is bored by what the other women are saying, at other times wildly determined to assure the Dutchman of her fidelity, while being dismissive towards her boyfriend, Erik. Grigorian has put her heart and soul into the role. 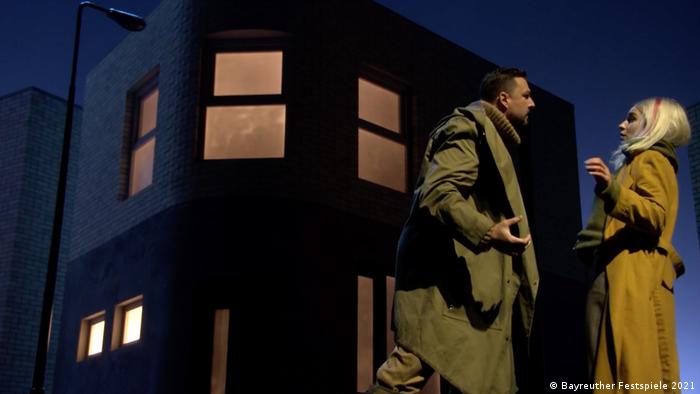 Swedish baritone John Lundgren, who stars as the Flying Dutchman,  plays the role as a silent observer harboring a psychological trauma that bursts out of him at the end. "Often the 'Dutchman' is staged as the story of Senta, the strong woman. For me, it was about telling the story of the Dutchman," Tcherniakov told DW.

In Tcherniakov's version, when the Flying Dutchman overhears Senta and Erik arguing and no longer believes in Senta's fidelity to him, he pulls a pistol from his coat and fires into the crowd. His men also shoot, flames burst from the windows of the buildings, and dead bodies litter the village square.

When Senta nevertheless swears her unwavering fidelity to him until death, her governess Mary appears with a rifle and shoots the Dutchman. Senta survives, and the two women embrace.

It is an unexpected ending devoid of the shared love and redemption — which some die-hard Wagner fans must have been waiting for, leading to a few boos aimed at the director.

The twist was well thought out but did not always seem coherently realized. Furthermore the cold, retro-inspired atmosphere hardly allowed emotionally charged moments to play out. 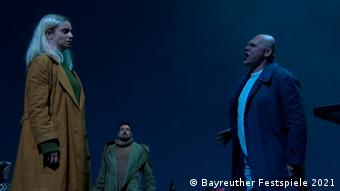 Senta had promised to love the Flying Dutchman unto death

Festival director Katharina Wagner had told the press a day before the opening that she wants to focus more on young people, and on exciting and unusual ideas at the Bayreuth Festival. This also includes the topic of digitalization.

In 2023, for example, there will be a complete production of Parsifal with action both on stage and via virtual reality glasses, to attract younger audiences to the Festspielhaus.

Correction, July 27, 2021: A previous version of this article's headline made a reference to the punk rock women's empowerment slogan, Girl Power. It was changed.