Gladbach may have set a new club record in their 2-0 away win against Apollon in the Europa League, but they were made to work hard. Wolfsburg also started slowly, but eventually ran out 5-1 winners against Krasnodar. 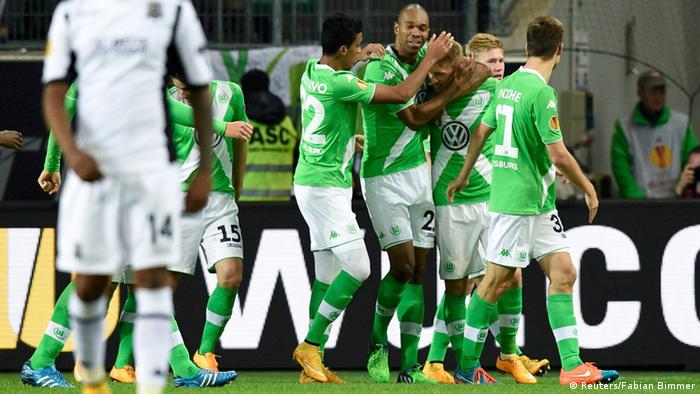 On an undefeated run of six games and having beaten their visitors 4-2 the last time out in the Europa League, Wolfsburg hosted Krasnodar confident of another three points.

In the first half, Diego Benaglio was Wolfsburg's best player. The club captain made a good save at the near post to deny Odil Akhmedov before pulling off an even better reflex stop to prevent Wanderson's acrobatic volley from finding the back of the net.

Benaglio the beast, Hunt the hero

Wolfsburg then had a flurry of their own chances as Joshua Guilavogui sidefooted wide after good work from Kevin de Bruyne. Bas Dost, starting for Ivica Olic, would have headed into an empty net had Andriy Dykan not palmed it away first.

With de Bruyne and Luiz Gustavo seemingly not seeing eye to eye at the end of the first half, Dieter Hecking clearly had to make changes. The one he made at the break, Aaron Hunt on for Ivan Perisic, worked wonders as Hunt instantly scored the opener. 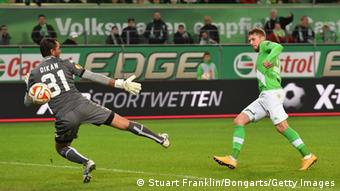 A long ball forward was flicked on by Hunt, sprayed out wide by de Bruyne for Christian Träsch to deliver the cross. Hunt, perhaps offside, beat Dykan to the ball to head Wolfsburg into the lead.

Benaglio had to be alert to stop Laborde from equalizing immediately, but then Hunt had his second of the night. Controlling another fine ball from Träsch, the former Werder Bremen attacker surged into the area before lacing home.

Two in a minute and late on

Another save from Benaglio kept Krasnodar at bay, before Bas Dost saw his low shot saved well by Dykan as Wolfsburg searched for a third.

A third goal did come but it was the game's not Wolfsburg's as Wanderson got the better of Knoche before firing low past Benaglio to put Krasnodar on the board. Wolfsburg responded a minute later though - Guilavogui slid in de Bruyne's low cross to restore the home side's two-goal cushion.

Substitute Nicklas Bendtner converted a late penalty and curled an effort in off the far post to post a scoreline that didn't represent the game. The win does mean that Wolfsburg have now won seven consecutive games in all competitions though - a new club record.

With Everton winning 3-0 against Lille, Wolfsburg have cemented their place in the top two of Group H. They now have a four-point lead on third-placed Lille and sit only one point behind group leaders Everton. 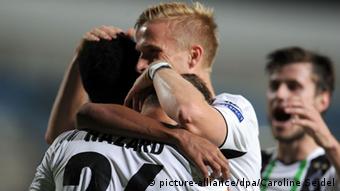 Gladbach weren't at their best, but it didn't matter

On the back of some excellent Bundesliga form, Gladbach continued their Europa League campaign against Apollon Limassol, a side they beat 5-0 in Germany in their last European fixture.

This time, in Cyprus, the outcome might have been the same but the story was very different. Gladbach, 2-0 winners, struggled to break down a compact and physical home team. The result does mean that Gladbach have set a new club record of 18 games unbeaten though.

Thorgan Hazard blazed over the first opening before he had another shot blocked, after Ibrahima Traore bent a lovely ball around the back of the defence. Apollon's goalkeeper, Bruno Vale, performed heroics in the first game, despite conceding five, and was on hand again to keep out Branimir Hrgota's flick from the resulting corner.

The home side nearly took the lead with their first attack, but Abraham Guie Guie's shot flashed just wide of Yann Sommer's far post. It prompted a period of frustration for Lucien Favre's side though, as they struggled to find a way through a physical home side. Apollon, in the meantime, grew bolder and Guie Guie's second effort was blocked before Camel Meriem fired narrowly wide from range.

After a welcomed half-time interval and ten more minutes of frustration, Gladbach found an opening. Hazard was offered a lot of space on the wing and his cross was flicked into the back of the net by an unmarked Raffael to give the visitors the lead.

The goal settled Favre's side, but only momentarily. Sommer and Tony Jantschke nearly combined to make a costly error at the back before a tense final ensued. Christoph Kramer nipped in to stop Apollon getting a shot away in the area, before Martin Stranzl, with the chance to seal the game, headed straight at Bruno Vale from a Hazard corner. 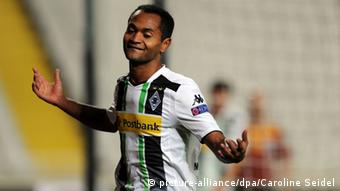 Apollon pressed forward in search of an equaliser, but they couldn't find a way through and in pursuit of an equaliser, they conceded a second. Gladbach's substitutes combined as Andre Hahn crossed low for Patrick Herrmann, who finished with aplomb to seal the three points.

It wasn't pretty from Gladbach, but it was a win and that's all that will be remembered. The other game in Gladbach's group saw Zürich run out 3-2 winners after a flurry of first-half goals - a result that puts Gladbach top of Group A after their win. The group, however, remains open. Behind Gladbach on eight points are Villarreal with seven, Zurich on four and Apollon on three.

A hat-trick from Jonathan Soriano guided Red Bull Salzburg to a resounding 5-1 away win against Dynamo Zagreb, a result that secures their progression to the knockout stages. The Dynamo from Moscow had more success on the night as they secured top spot in Group E, thanks to a 1-0 win against Estoril, with former Germany international Kevin Kuranyi scoring the winner.

Tottenham Hotspur have yet to secure qualification, but they also won, 2-1 away against Asteras Tripolis, thanks to a goal and an assist from Andros Townsend, while Inter Milan were held to a 1-1 draw by St. Etienne.

Defending champions Sevilla won 3-1 at home against Standard Liege, while Napoli's 3-0 win against Young Boys Bern saw the Italian side move into second in Group I. Mario Gomez started for Fiorentina, and Marko Marin came off the bench, but Fiorentina could only draw 1-1 at home against PAOK.