Wolfgang Schäuble warns against protectionism in US 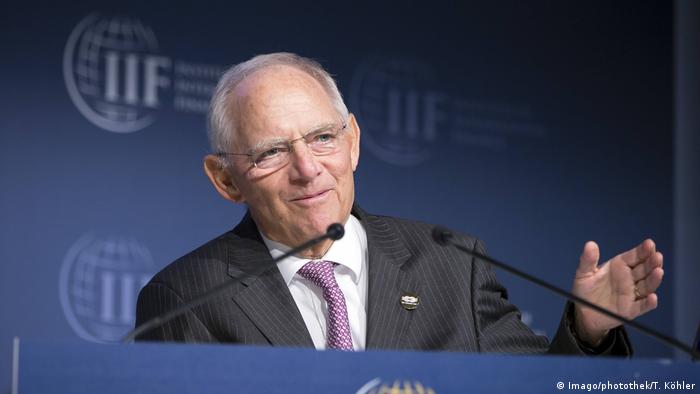 Wolfgang Schäuble, who is due to become the next president of Germany's lower house of parliament, on Saturday made his last appearance at the annual conference of the International Monetary Fund as Germany's finance minister.

During his speech, Schäuble reiterated his warnings against protectionist economic policies and appealed for closer trade cooperation among countries.

"We should all be worried about the weak growth of global trade and the increasing anti-free trade rhetoric," he said. "We need more openness rather than less."

The German finance minister added that protectionist measures hurt global growth and that countries should work together to ensure equal opportunities for all.

'Oppose protectionism in all its forms'

Schäuble, the chairman of the G20 finance group this year, said he believed the backlash against globalization was giving way to a greater understanding that the path toward rising prosperity for all depends on greater cooperation among countries.

Schäuble did not refer directly to US President Donald Trump and his "America First" policy during the speech.

In his quest to fulfill his campaign pledge, Trump has withdrawn the US from an intended trans-Pacific free-trade pact and has threatened foreign companies with penalties and taxes. The US president has also criticized export giants China and Germany over their trade surpluses.

Schäuble, who has helmed Germany's financial policy for the past eight years, stressed on Saturday that Germany would continue to "oppose protectionism in all its forms."

Greeks have long viewed the German finance minister as a symbol of failed austerity policies. But Athens is by no means joyful now that Wolfgang Schäuble is leaving after eight years in office, says Jannis Papadimitriou. (10.10.2017)

At a meeting of European finance ministers, Germany warns that eurozone banking rules need reform amid new criticism that recent rescues of Italian banks failed to heed the lessons of the financial crisis. (10.07.2017)