With foreign press blocked out, Iranians tweet the news | World| Breaking news and perspectives from around the globe | DW | 17.06.2009

Protestors are using the popular micro-blogging site Twitter to make an end run around the foreign press blackout in Iran, and getting help from the US. Here’s a look at what they’re saying. 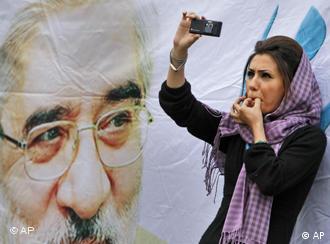 With no press around, Tuesday's protests were often captured on mobile phone cameras

After the weekend’s images of beaten demonstrators, and Monday’s scenes of mass rallies, Iranian authorities clamped down on foreign press on Tuesday. Reporters from Germany’s Der Spiegel news magazine were told not to leave their offices to report on the ongoing protests. US broadcaster CNN was forced to use pictures taken from Iranian state television, which showed only the pro-Ahmadinejad rally.

The Islamic Republic’s crippling of the mainstream media meant that so-called "citizen journalism" took on an increasingly important role. Ordinary Iranians sent pictures and videos they’d taken with digital cameras and mobile phones, showing both peaceful demonstrations and continued harassment and violence from authorities. Among the best ways available to get written communiqués out was through the website Twitter. 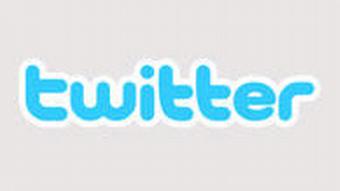 For more than just the musings of Ashton Kutcher

The site allows users to write brief (140 characters max.) bulletins called "tweets," that are posted to a website for anyone to read. Iranian protestors have tweeted to get the message about their plight out to the world, and have alerted each other to plans for further protests or areas where pro-government vigilantes were attacking demonstrators.

Twitter had planned to undergo scheduled maintenance on Monday, but was asked by the US State Department to postpone it because of the important role the site was playing in communication within the Iranian opposition. Originally set for overnight US time, Twitter’s maintenance was shifted to 1:30 a.m. Tehran time, which is 5 a.m. in Washington.

The number of opposition twitterers seems to be growing. Many have attached the tag "Iran election" to their tweets, making them easy to find at the Twitter website. The blog simoncolumbus maintains a list of English-language twitterers in Iran, Broadcasters like CNN and Birtain’s Sky have taken to reposting tweets, and the prominent US blogger Andrew Sullivan is aggregating Iran election tweets and posting long lists every few hours.

What are they saying?

The tweets paint a confusing picture, one of conflicting reports and mixed emotions. Here’s a selection, along with some background information to make them a bit more intelligible: 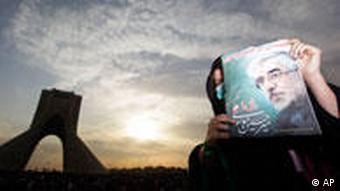 The Azadi monument sits in the middle of the square

This tweet calls for a new march on Wednesday at the same site of the marches on Monday, from Inqilab (‘revolution’) to Azadi (‘freedom’) square. This stretch of road in central Tehran is also where many of the biggest protests against the Shah in 1978-79 took place.

"from Vanak sq to Parkway , people raise their hand as a sign of protest"

"on the eastern side of Tehran, Narmak, many people were shouting "Allah o Akbar" at 10-11 PM. That's was heart-warming"

The first one here describes Tuesday’s big opposition protest, which was moved from the central Vali-e-Asr square to the more northern neighborhoods because a pro-Ahmadinejad rally took over Vali-e-Asr square first. The move was something of a retreat to safety, as the area between Vanak square and the Parkway is solidly anti-regime. The neighborhood is a well-off one, which has led some to say that the heart of the current protest movement lies in the disaffected rich and intellectual class.

The second tweet, though, would give the lie to this. Narmak is a working-to-lower-middle-class neighborhood, one that probably is home to a lot of Ahmadinejad voters, or at least once was. The cry "Allah o Akbar" ("God is great") is one that a lot of protestors have been using to hearken back to the revolution, when shouting "God is great" from the rooftops was popular.

"the gov apparently doesn't trust the normal police, they are all unarmed with empty holsters!"

These three tweets bring up the fact that there are some important distinctions within the various "authorities" taking part in the "crackdown" on the streets. Baseej (sometimes "Basij") is a group that was formed by Iraq war veterans in the late 1980s, but has expanded to become a roving group of morality watchdogs and auxiliary police force. Their religious bona fides are unquestioned and they receive a lot of patronage from hardline elements in government. The Etellaat is the secret police, something akin to the East German Stasi, or indeed the Shah’s SAVAK. These two groups are widely disliked by Iranians, and are seen as the enemy in the present struggle. 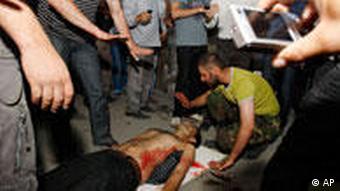 The Iranians killed late Monday were shot by Basiji

If these tweets are to be believed, the allegiances of the police force and regular armed forces, however, may be in doubt. There is some reason behind this. The army is made up mostly of conscripts, who might have no more allegiance to the hardline state than any other ordinary citizen, and a reluctance to deploy them in urban policing could signal the state’s mistrust of their resolve. The Tehran police, while dependent on the state for pay, are similarly un-ideological in composition, and sending them out unarmed would be another clear signal of doubt as to where their loyalties lie. 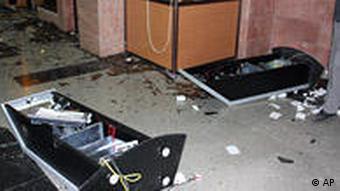 The Basiji did a number on this Tehran university dormitory

"some student killed by the 4a blast in Babol Univ's dorms; surrounded by Basij forces"

The protest movement (as well as the crackdown on it), according to these tweets, may be spreading to other parts of the country. Babol in the north, Iran’s second largest city Mashhad in the northeast, the south-central city of Shiraz, Rasht in the northwestern Gilan province, and Qazvin, southwest of Tehran. (Qazvin, incidentally, has a number of big universities – Imam Khomeini International University among them.) 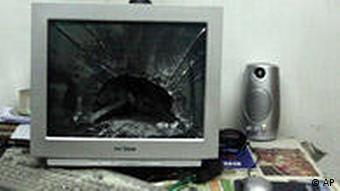 The authorities got to this sutdent's internet connection

"Kayhan News, the ultra right state-run newspaper, is taken down by a series of DDoS attacks."

"Do NOT publicise proxy IP’s over twitter, the moment you post iranian government will se it and block it. instead DM."

These tweets show how much the internet has become an important new front in the protest movement.

The first shows that concerted effort from web users outside Iran took down a major hard-line website. The second suspects that the state is fighting back against the protesters by posing as pro-Mousaviists online.

The third reminds twitterers that their tweets can be read by anyone, including the state security forces, and asks them to use direct messaging (DM) for sensitive information like proxy IP addresses Iranians are using to get around bans on many web sites. The fourth tweet reckons that state security forces themselves have begun tweeting misinformation in hope of creating confusion or even new clashes.

The last one asks twitterers around the world to pitch in.

Twitter has created a small revolution with a few clicks on a mobile phone. While it's a way to catch up on the latest gossip, Twitter is increasingly being used by journalists and political activists in Egypt. (02.06.2009)