With border post, rebels gain important victory and new confidence | World| Breaking news and perspectives from around the globe | DW | 31.08.2011

With the capture of Ras Jdir, the main crossing point between Libya and Tunisia, Libyan rebels have scored another victory against Moammar Gadhafi. They're confident of victory, but are counting on western support. 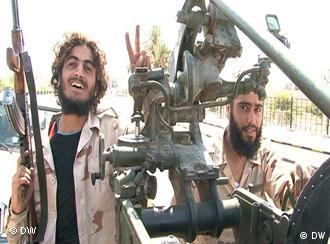 Rebels celebrate at the border between Algeria and Tunisia

"We are men, not rats," says the bearded man with long dark hair dressed in a camouflage vest and carrying a Kalashnikov in Ras Jdir, the border point with Tunisia about two hours by car from Tripoli.

"Rats" was how former Libyan leader Moammar Gadhafi referred to the rebels fighting to topple his dictatorial regime. But that ragtag group of men succeeded in fighting their way across the country, fighting back Libyan forces with the help of NATO air support, and driving Gadhafi into hiding, ending decades of authoritarian rule.

On Friday, the rebels took control of the Ras Jdir post and raised the flag of the rebellion. The crossing was Gadhafi's last strategic base and one of the realistic ways for him and his sons to get out of the country. 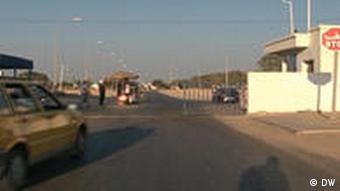 Tunisia closed the border crossing for a while, but reopened it after rebels took control

That route has been cut off, although some in the Libyan strongman's family have already escaped. Algeria's foreign ministry has confirmed that Gadhafi's second wife, two of his sons and his daughter have entered Algeria. They are expected to enter a third country, even though the rebel leadership wants to put them on trial in Libya.

Only recently, the green flags of Gadhafi's Libya could be seen flying from the roofs of buildings. An oversized portrait of the leader stood between two lanes of the main road, showing a laughing man in a green robe with his right fist in the air. It was as if the self-proclaimed "revolutionary leader" was greeting every driver who crossed the border from Tunisia.

These symbols, meant to show the power and omnipresence of the dictator, were spread throughout the country. Now they belong to the past.

Today in Ras Jdir, rebels have replaced the green flags with new red, black and green ones and the large portrait has completely disappeared.

The same could be said of Gadhafi himself, who has gone into hiding. "Moammar is the rat," says the rebel with the Kalashnikov. "Real men don't hide," he yelled, firing rounds from his rifle into the air, an expression of joy common among the rebels and which has been heard with increasing frequency as Gadhafi's power base has crumbled.

"It's just natural," says Abdallah Souiri, brigade leader from the nearby town of Zouara. "We were denied joy for 40 years. These boys were all born during the Gadhafi era," he adds, raising his voice to be heard over the rebels who are gunning their trucks and throwing up dust in their wakes. Others wave their weapons and shout "Allahu Akbar," or "God is great."

Indeed, most of the rebels who have taken the border crossing are very young - many of them haven't turned 20 yet.

After Ras Jdir, rebel forces are converging on Gaddafi's hometown of Sirte

None of the rebels are professional soldiers, says Massoud Zouari, the leader of another brigade. They are students, teachers, doctors and engineers and many have been fighting since the beginning of the uprising six months ago. Zouari himself was a civil servant at the state utility company before he took up arms.

"When the war is over, we will all return to our old lives," he says, ensuring that the weapons, including bazookas and rockets will be returned to the National Transitional Council.

He says the world is about to see a new Libya, "not like the false picture that Gadhafi and his cohorts presented about us." While his people were shut off from the outside world and inside a dictatorial system for 40 years, they yearn for democracy and free elections now. "We will fight for that," he says.

The road to final victory

But the fight isn't over just yet. Not far from Ras Jdir, troops still loyal to Gadhafi have dug in among the villages that surround the crossing point, the rebels say, making the road to Tripoli still dangerous.

Securing the road is crucial for the rebels, since it will allow them to send their wounded for treatment in Tunisia more quickly and to get food and medicine to the capital more easily. 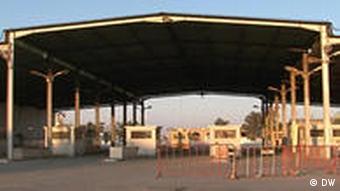 The number of people arriving at the crossing from Libya has been low, rebels say

Tunisia had last week closed the border crossing with Libya to all but humanitarian emergencies. It feared fighting between Libya's rebels and remaining pockets of Gadhafi loyalists might spill over. But on Sunday, Tunisia reopened Ras Jdir after the rebels took control of the crossing.

The capture of Ras Jdir by the rebels is also important for Libyans who fled to Tunisia during the fighting. Many that had fled the skirmishes west of Tripoli and in the southern Nafusa mountains in recent weeks have begun to return home, according to the United Nations refugee organization UNHCR.

But they have had to cross the border at Deniba and, if on the way to Tripoli, take a detour of about 300 kilometers (186 miles). Up until last Friday, Deniba was the only border crossing in rebel hands.

At the border post, trucks with rebels on board can be seen constantly leaving, heading back toward the front. Most of the time, two or three men are sitting in the truck's bed where anti-aircraft guns or other weapons have been mounted. The name of the rebels' home city has often been painted on the hood of the vehicle.

The exodus has left few troops behind to protect the border point, but most think that the likelihood is slim that Gadhafi's forces will try to retake the area.

When asked about Libya's future relationship with western countries, one rebel at the border in a Palestinian scarf says he think relations with France and Britain are going to be especially close.

"They have helped us a lot and without NATO Gadhafi's mercenaries would have razed Benghazi to the ground," he says.

Gadhafi's troops had begun to attack the eastern rebel stronghold of Benghazi with artillery and fighter jets and the Libyan revolution might well have ended there had the UN Security Council not given NATO the go-ahead to enforce a strict no-fly zone over Libya.

"We will also have good relations with Germany," says the rebel. "The Germans were hesitant at the beginning but then took a position - the right one."

"Those who helped us during this time will remain our friends forever," he says, laughing. "After all, we're men, not rats."

The list of countries recognizing the rebel National Transitional Council as Libya's legitimate governing body is growing. But African Union leaders have remained loyal to Moammar Gadhafi, and for good reason. (31.08.2011)

Libya's interim council has given forces loyal to Moammar Gadhafi an ultimatum to surrender within four days or face military force. Meanwhile, a diplomatic rift is developing with neighboring Algeria. (30.08.2011)

The political upheaval in Libya could result in considerable losses for Russian companies, according to experts. Hardest hit will likely be the arms trade, the oil and gas sector and infrastructure projects. (31.08.2011)