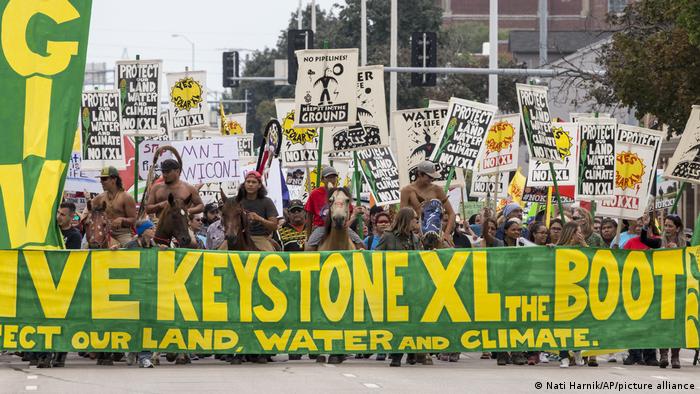 Within hours of taking his oath of office, Joe Biden, the 46th president of the United States, had signed over a dozen executive orders, among them one canceling the permit for the Keystone XL oil and gas pipeline.

The pipeline was to carry millions of gallons of oil from Canada to refineries in the US. Along with the project cancellation, the executive order revokes oil and gas development at national wildlife monuments.

Conceived over 10 years ago, the $8 billion (€6.6 billion) pipeline has been fraught with controversy from the beginning.

What is the Keystone XL pipeline project?

The completed segment of pipeline was to cover a 1,179-mile (1,897-kilometer) route from the province of Alberta, Canada, to Nebraska where it would have connected with the existing pipelines leading to the coast. It would have transported up to 830,000 barrels of heavy crude oil a day, replacing production from Latin American countries. The pipeline is owned by energy company TC Energy and the government of Alberta. TC Energy had not responded to a request for comment at the time of publication.

Approved by Canadian regulators in 2010, the project was blocked by former US President Barack Obama in 2015, who said the benefits of the pipeline would have too heavily favored Canada while producing additional greenhouse gas emissions.

Obama's successor, President Donald Trump, later reversed the decision, issuing a presidential permit for the project in 2017. Operations were due to begin in 2023. 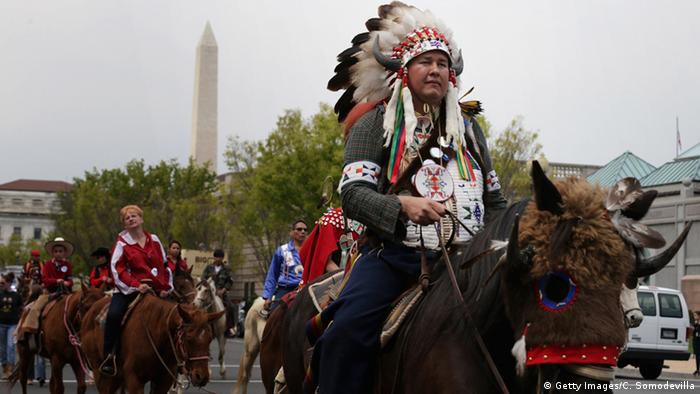 In 2014, a campaign called 'Reject and Protect' organized protests by farmers, ranchers and Native American tribes

Environmentalists, indigenous groups and ranchers have slammed the project over the years, pointing to the risk of oil spills and saying the pipeline was an abuse of their lands.

In 2018, a federal judge temporarily blocked construction, saying that the US government had not properly reviewed its environmental impact. Other lawsuits have repeatedly brought progress to a halt, earning Keystone XL the nickname "zombie pipeline."

Critics have also accused the project of failing to properly protect pipeline workers from COVID-19. Indigenous tribes and other rural communities located along the route said they feared workers would bring in the virus.

The oil was to be extracted from Alberta's tar sands, also known as oil sands, a mixture of sand, clay, water and a thick substance called bitumen. This extraction process is more costly and requires more energy than other oil sources.

"Tar sands are not compatible with a future that deals with climate change in any meaningful way," Charlie Kronick, a UK Greenpeace campaigner and oil industry analyst, told DW.

Renewable energy: US hopes and fears

Renewable energy: US hopes and fears

Why is Biden canceling Keystone XL?

Biden has been "against Keystone from the beginning," he said in an interview with US news outlet CNBC last May.

"It is tar sands that we don't need [and] that in fact is a very, very high pollutant," Biden said at the time.

Fighting climate change is set to be one of the key pillars of the Biden administration.

"A cry for survival comes from the planet itself,'' the president said in his inaugural address. "A cry that can't be any more desperate or any more clear now.''

"It's fair to say that once you're past COVID, climate is going to rank as high as anything on the priority agenda for the new administration," said Adam Zurofsky, the executive director of Rewiring America, a nonprofit dedicated to combating climate change through the electrification of the US economy.

Particularly exciting to people working in this space is the Democratic president's intention to take "a whole government approach" to tackling climate change, Zurofsky told DW. This means "thinking about how the federal government can use all the tools at its disposal [...] to try to advance America|s standing and efforts to combat climate change."

How has Canada reacted?

Canceling the pipeline is likely to cause tension with the the neighbor to the north. Canada has the third-largest oil reserve in the world, and fossil fuel is the country's top export.

"For Canadians, we are talking about $100 billion in [annual] exports," from the pipeline, Alberta Premier Jason Kenney told the Agence France-Presse news agency on Monday, responding to rumors Biden would kill the project. "So this is a matter that touches on Canada's vital economic interests."

Dropping the project would kill jobs in both countries and would make the US more dependent on OPEC oil imports, he added.

In recent weeks, Canadian Prime Minister Justin Trudeau had spoken with Biden and other US officials to make a case for the pipeline.

"It makes things a little bit more uncomfortable for Trudeau in a domestic context," Ryan Katz-Rosene, a politics professor at the University of Ottawa, told AFP.

'We are net losers of wind energy'

While Trudeau has styled himself as a champion of climate activism and is largely aligned with Biden politically, he has also promised to oversee the completion of multiple pipelines meant to bring Canadian oil to new markets.

Several Canadian politicians have criticized the move, arguing that the US was better off getting oil from its eco-conscious neighbor than the likes of Saudi Arabia or Russia. Zurofsky calls this line of arguing "a false choice."

"It assumes that oil is going to come out of the ground," he said. "And the argument on the climate side is that we should be doing everything we can to make that harder, make that more expensive, make that less likely, because that oil coming out of the ground is harmful to our environment and is costing us."

In a statement anticipating the news, TC Energy said it was "disappointed" with the decision and that construction would cease while the company considered how to proceed.

The province of Alberta has previously said it would consider selling pipe and materials from the project for scrap to recoup some of the financial losses. The province has invested more than $1 billion of taxpayer money in the project.

Litigation took place after Obama canceled the permit the first time, and there are a number of legal theories surrounding the fact that a permit was already issued, Ken Alex of the Center for Law, Energy & the Environment at University of California, Berkeley, told DW.

"The question is, for the proponents of the pipeline, given the time and cost involved in litigating the issue, and in light of the need to reduce demand for oil and gas, what happens to the market over that time. Is the investment worth it?"

Around 60% of Germans surveyed for a new poll said they were in favor of immunity passports. Chancellor Angela Merkel has expressed her support, albeit as soon as most residents have been offered the shot.