Will populism win in the Netherlands?

The Dutch elections are less than a week away. In an interview, Dutch MP Han ten Broeke discusses whether he thinks his government will be swept away by the populism that has stunned the Western world over the last year.

The Dutch parliamentary elections are around the corner, and after Britain's vote to leave the European Union and Donald Trump's U.S. presidential win, many are worried that the Netherlands could be next in choosing an anti-establishment government.

What's more, many view the Dutch elections as an indicator of populist strength and anti-establishment sentiments in Europe ahead of elections in France and Germany later this year.

So what can we expect from the Dutch general elections?

DW's flagship political interview Conflict Zone sat down with Dutch Member of Parliament Han ten Broeke, who is campaigning with current Prime Minister Mark Rutte and his liberal Party for Freedom and Democracy (VVD). Rutte and the VVD Party are in a neck-and-neck race with Eurosceptic and anti-Islam populist Geert Wilders and his far-right Party of Freedom (PVV). 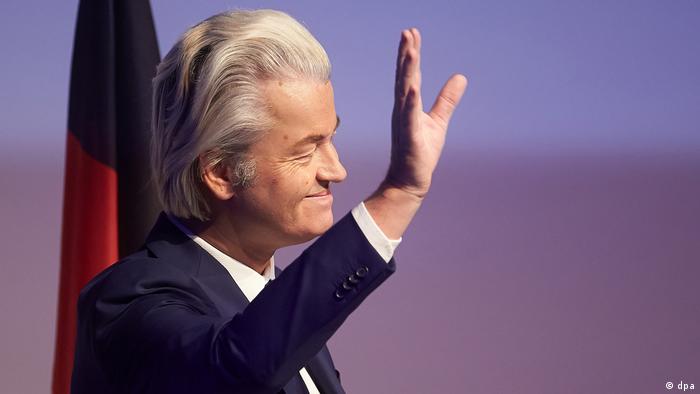 How far has the far-right come?

The Netherlands went from virtually zero to about 10 percent immigrants in just a few decades and populist politics have been steadily gaining support there, with Geert Wilders leading the way.

Wilders has surged in popularity on a promise to return Holland to its white Christian roots. He has vowed to protect Dutch liberal views on gay rights, legal drugs and feminism from Islam, which Wilders describes as an enemy. He wants to ban the Koran, which he has compared to Hitler's "Mein Kampf" and wants to shut down Mosques.

"Geert Wilders is running on an anti-immigrant, anti-Islamic platform that we see in other countries as well. This is a popular sentiment that goes very much to the heart of the anxieties of many people," Han ten Broeke told Conflict Zone.

"They feel that we haven't been listening to them. And I think to a large extent they are right." 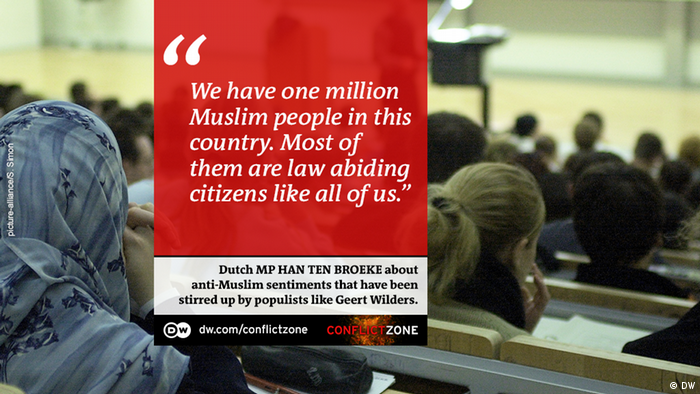 Will Wilders be the Netherland's next Prime Minister?

Wilders has been leading the majority of polls in recent months and is expected by many to get the simple majority, which is usually sought to govern, but that doesn't mean he will become prime minister. In order to do so, he would need to form a coalition with other parties.

However, all but one party have ruled out sharing power with Wilders, whose policies are seen by many as offensive and sometimes unconstitutional.

Current Prime Minister Mark Rutte - Wilders' strongest competitor - is one of the politicians who has vowed not to join Wilders in a coalition. But in July 2010, Rutte only became Holland's Prime Minister because he reached a deal with Wilders to support Rutte's minority government. 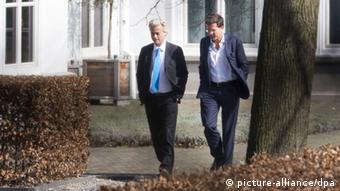 Asked how we can trust Rutte not to make another deal with Wilders to keep power, Han ten Broeke said this would not happen. Ten Broeke said Wilders has radicalized his platform too much.

In 2010, Wilders was already anti-Islam, calling for a ban on immigration from Muslim countries and calling Islam a fascist religion.

Seven years later, Wilders has now pledged he wants to close down Mosques and ban the Koran, which would be breaking the constitutional freedom of religion - a deal breaker for ten Broeke.

"This time around he has made it very clear that he wants to break the constitution on various fronts. Our country was based on religious freedom," he said.

"Islam does not belong to the Netherlands," Geert Wilders writes in the above tweet. "The Netherlands should be ours again. No immigration from Islamic countries"

Despite promising not to form a coalition with Wilders, Rutte has been using Wilders' anti-immigrant rhetoric himself.

In January 2017, Rutte took out full-page ads in newspapers, saying: "If you reject our country, I'd prefer you leave. Be normal or be gone."

"Live up to the rules. That is what it means in Dutch."

Asked whether that implies people who are not normal need to leave the Netherlands, Han ten Broeke said:

Ten Broeke said this applied to both immigrants and Dutch natives. 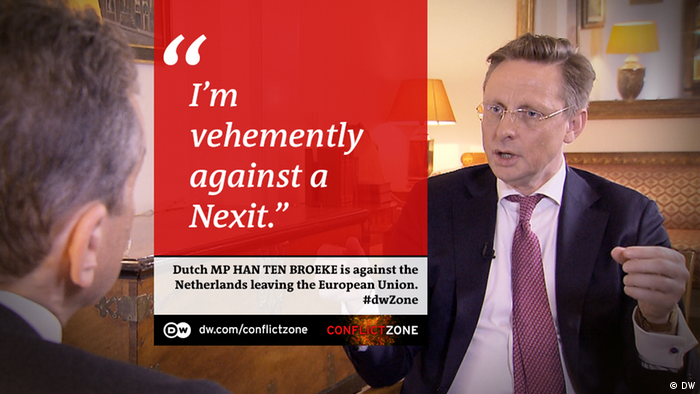 Geert Wilders has called for the Netherlands - a founding member of the European Union - to follow the UK and leave the EU. In addition to a so-called Nexit, Wilders is also demanding a referendum on the European currency.

In the interview, Han ten Broeke spoke out against this, saying: "I'm vehemently against a Nexit."

However, the Dutch parliament launched a parliamentary inquiry - the most powerful instrument it has at its disposal - to examine all the "political and institutional options" for the future of the euro.

Confronted with this, ten Broeke said:

"We've made some grave mistakes with the euro, for example letting Greece be part of it. The euro now sometimes serves a little bit like a straitjacket." 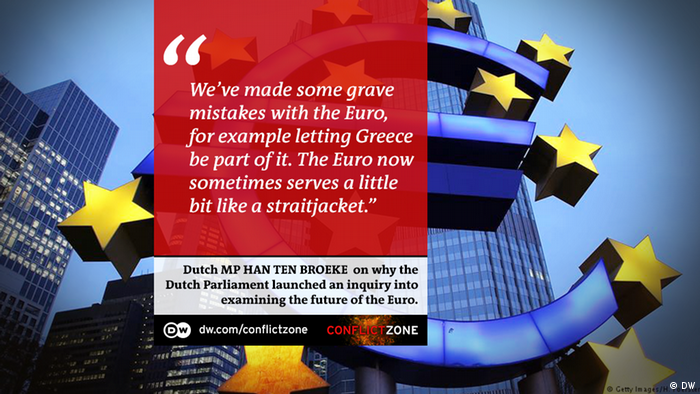 What's the deal with Turkey?

During the Dutch presidency of the EU last year, Dutch Prime Minister Rutte was instrumental in implementing the deal with Turkey to stem the flow of refugees into Europe, which was roundly criticized by human rights groups.

In the interview, Han ten Broeke defended the deal, describing it as "humanitarian" and calling it a "perfect example that we rarely see of successful European foreign policy."

He referenced only one person drowning last month when crossing the Mediterranean Sea while attempting to reach Europe, compared to 227 people drowning in January last year before the deal was implemented.

Asked whether Turkey's slide away from democracy, repressive measures towards journalists and weakening of freedom of press should preclude deals with Ankara, Han ten Broeke said:

"Welcome to the real world. We Europeans are surrounded by some very authoritarian awkward countries. And if you don't want to deal with them, then you don't do deals at all. This means that you're not dealing with the problems and the prospects of Europe." 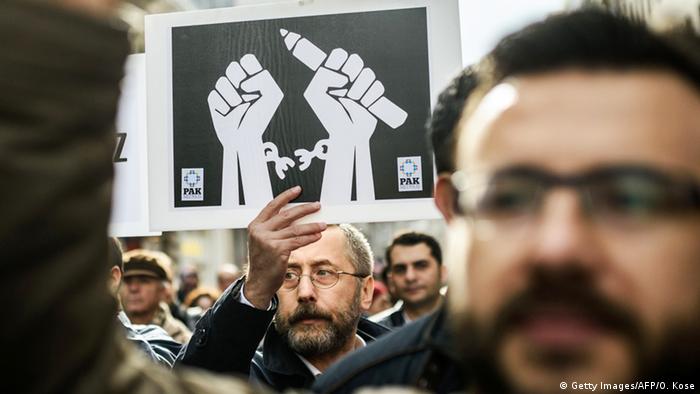 According to Han ten Broeke, Turkey should remain a NATO member, despite its recent human rights violations.

"Turkey has so many border conflicts that it would be very unwise to simply toss away the very important alliance that we have. Are we worried where Turkey is leading us? Yes we are. But we also have a situation to sort out in Syria, Iran and northern Iraq. Do you think we can solve that without Turkey?"

However, ten Broeke also stressed that his government had openly criticized Turkish politicians for their attempts to hold rallies in Europe for an upcoming referendum. Turkish citizens living aboard are eligible to vote in the referendum whether President Recep Tayyip Erdogan's powers should be expanded further.

"No other European leader has so far followed," Han ten Broeke said. Have the Dutch lost trust in their politicians?

A recent poll by the independent research and consultancy Motivaction revealed that there is a lack of confidence in Dutch politicians. In fact, the poll says more than 61 percent of respondents currently view Dutch politicians as "elitist, unreliable and dishonest."

According to Han ten Broke, this is a phenomenon that we see throughout the Western world in many democracy strongholds, such as France, Britain and the United States.

"I think confidence and trust in modern-day Western societies is at a very low point," he said.

"And we can also see why, because there are so many threats, so many external threats, internal threats, and they seem to collide. People are worried whether they can still live their comfortable lives."

Another reason for the current lack of trust, according to ten Broeke, is Dutch politics being so fragmented and citizens thus being confronted with "a tremendous amount of voices."

In fact, no less than 28 parties are competing for votes in this month's Dutch general elections, with 14 parties expected to win at least one seat in the 150-member parliament.

On the bright side, ten Broeke stressed that despite the trust issues and lack of confidence in politicians, voter tunrout in the Netherlands still goes up to 80 percent.

Far-right leader Geert Wilders has slammed a planned event in the Netherlands in support of Turkish President Recep Tayyip Erdogan. Wilders is hoping to come out on top in the country's next general election. (05.03.2017)

Freedom Party head Geert Wilders has pledged to crack down on "Moroccan scum" as he kicks off his election campaign. Wilders leads polls but would struggle to form a government, having been shunned by mainstream parties. (18.02.2017)