Will aid for Afghanistan strengthen the Taliban?

International donors have pledged more than $1 billion to avert an impending humanitarian crisis in Afghanistan. Although the Taliban won't handle the money directly, it could be spun as an endorsement of their regime. 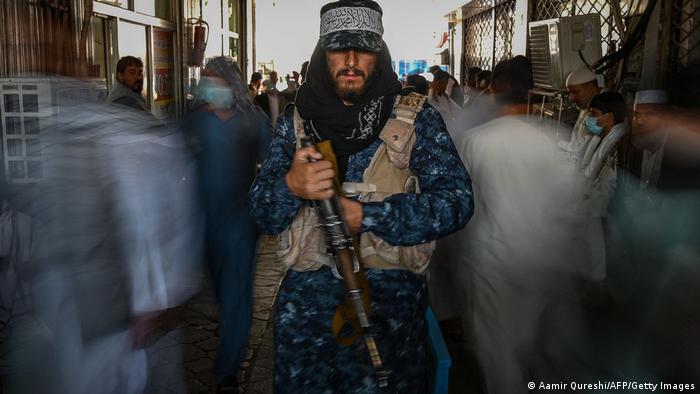 Despite assurances that international funding won't go to the Taliban, the Islamists can still monitor and control aid agencies and humanitarian workers

The United Nations has hosted a donor conference for Afghanistan at a time when the country's new rulers are desperately looking for international recognition of their Islamist regime.

The Monday meeting, which was held in Geneva, raised more than $1 billion (€850 million) to keep afloat aid programs in Afghanistan.

Afghanistan, ravaged by decades-long wars, had already been facing a humanitarian crisis long before the Taliban took over the country on August 15. But the Islamist capture of the state has worsened the situation, with the international community remaining unsure of how to help Afghans without legitimizing the militant group.

Many countries that were willing to provide aid have increasingly expressed hesitation due to concerns about how funds will be spent with the Taliban in power.

German Foreign Minister Heiko Maas, who participated in the international donor conference, said it was up to the international community to "take responsibility" for the people in Afghanistan, but that aid agencies need "proper access" and aid workers had to be able to carry out their work "without fear of intimidation, tyranny or restrictions by the Taliban."

'We are on the brink of a humanitarian catastrophe'

'No risk of legitimizing the regime'

Ahmadi Saidi, a former Afghan diplomat, told DW he was sure the pledged funding won't end up with the Taliban.

"It is humanitarian aid, which will be used mostly by the UN and nongovernmental organizations," he said.

"The money will not be used by the Taliban; therefore, there is no risk of legitimizing the regime," he added.

Suraya Dalil, the director of the WHO's primary health care program, also believes the aid money will not be handed over to the Taliban. "It will be managed by the UN and aid organizations and will be spent to provide food and medicine to internally displaced Afghans," she told DW.

Dalil said that most participants at the Geneva conference slammed the Taliban's attitude toward women.

"Providing humanitarian aid to Afghanistan does not mean that the international community is recognizing the Taliban," she believes.

It is, however, unclear how aid agencies and their workers will operate in the Taliban-ruled Afghanistan. Despite assurances that international funding won't go to the Taliban, the Islamists can still monitor and exert influence over aid agencies and humanitarian workers.

Countries like Pakistan and China are urging the international community to accept the "new reality" in Afghanistan and support the new rulers.

"The world must recognize that new reality and engage with it. Weigh your options [and decide] what is the best way forward," Pakistani Foreign Minister Shah Mahmood Qureshi said at a press conference in Islamabad on Friday, along with his Spanish counterpart Jose Manuel Albares.

"Afghanistan belongs to the Afghan people, and its future should be in the hands of its own people," Foreign Minister Wang Yi was quoted as saying in Tianjin. "The Afghan people now have an important opportunity at national stability and development."

Abdul Satar Sadat, a Kabul-based security expert, says that countries like Iran, China and Turkey have kept their diplomatic presence in Kabul, which is tantamount to "a silent recognition of the Taliban government."

Apart from maintaining diplomatic ties with the Taliban's Afghanistan, these countries are also using financial aid to legitimize and strengthen the regime.

Former Afghan diplomat Ahmadi Saidi believes that working with the Taliban government will be "challenging" for any country because many Taliban ministers and high-ranking officials are still on the UN blacklist.

Despite the politics around aid, it remains a fact that Afghanistan is facing a massive humanitarian crisis, and the international community cannot turn a blind eye to the plight of the Afghan people.

"International funding for Afghanistan has dried out in the past few weeks. Most of the private banks are not fully operational and people cannot withdraw money," Khan Jan Alokozai, a member of Afghanistan's chamber of commerce, told DW.

Alokozai says poverty is rising in the country. The UN recently reported that Afghanistan is on the brink of "universal poverty," and could face poverty rates of 97% to 98% within a year, compared to 72% currently.

Sayed Masood, a lecturer at the University of Kabul, says the current situation in Afghanistan is not only a result of the Taliban takeover. "It was already bad. The much-needed aid will be helpful, but it will not solve Afghanistan's financial problems," he told DW.

"It is important that the funding goes to the right people. It should not be wasted as happened in the past."