Australia's eastern state of New South Wales is battling unusually early wildfires. Flames have destroyed at least 100 homes outside Sydney. Landmarks including the city's Opera House are shrouded in smoke. 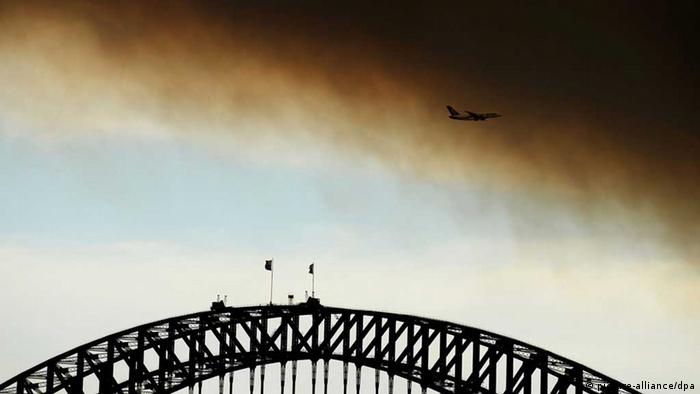 Firefighters said scores of homes were feared destroyed on Friday in Australia's Blue Mountains region and other parts of New South Wales state (NSW). A day earlier, a 63-year-old man died from a heart attack while defending his home north of Sydney.

The blazes follow Australia's warmest 12 months on record. Its summer phase, between December and February, are Australia's typical wildfire season.

Late on Thursday, a cool weather front swept through the region, lowering temperatures from 34 degrees Celsius to around the mid-twenties Celsius.

Around 100 fires are still burning accross NSW, 30 of which are uncontained, the NSW Rural Fire Service (RFS) said.

RFS Deputy Commissioner rob Rogers told Nine Network TV that assessment teams and police were making their way through affected areas in search of survivors and victims, as well as to try and determine the number of homes destroyed.

"I know some information that's been passed to me that just in one street, 40 homes were lost," he said.

NSW state premier Barry O'Farrell said the number of homes lost would "be at least in the hundreds."

O'Farrell added that two firefighters have been hospitalized, but did not provide details of their injuries.

In the state's metropolis Sydney, health authorities issued a respiratory alert. The Opera House and Bondi Beach were bathed in an amber hue and ash.

At Newcastle, 160 kilometers (100 miles) north of Sydney, the regional airport was closed on Thursday. Schools and workplaces were evacuated.

Australia's worst firestorm of recent years was in southern Victoria state. Thousands of homes were razed and 173 people killed.

Forest fires on Australia's usually cooler island state of Tasmania have forced thousands of residents and tourists to flee, many by boat, and razed at least 80 homes and premises. (05.01.2013)