The US army private who leaked thousands of secret documents to WikiLeaks has apologized in court. Bradley Manning expressed regret for the first time as he took to the stand during his sentencing hearing. 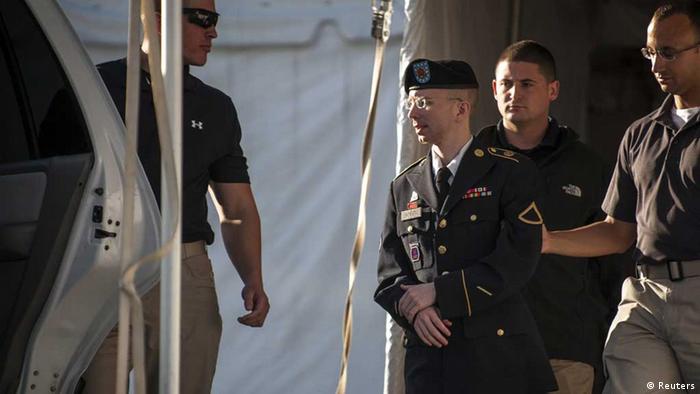 US soldier Bradley Manning addressed the military judge, Colonel Denise Lind, in a courtroom in Fort Meade, Maryland with 46 international journalists and 78 spectators in attendance: "I am sorry that my actions hurt people. I'm sorry that they hurt the United States," Manning said on Wednesday.

The 25-year-old soldier faces up to 90 years in prison for his offenses, which include espionage and computer fraud. The release of diplomatic cables, warzone logs and videos to the anti-secrecy website WikiLeaks, was the largest leak of documents in US history. It included a video of a 2007 US helicopter attack that killed civilians in Iraq, including a Reuters news photographer and his driver.

Manning addressed the court after a day of testimony about his troubled childhood in Oklahoma and the extreme psychological pressure that experts said he felt in the "hyper-masculine" military environment due to a gender-identity disorder - his feeling that he was a woman trapped in a man's body.

In a short, prepared statement Manning said he realized that he should have worked more to find a legal means to draw attention to his concerns about the way the war was being waged. He said he wanted to get a college degree, and he asked for a chance to become a more productive member of society.

Manning's defense team has argued that he was a naive but well-intentioned young man who hoped to ignite a public debate over the conduct of American diplomats and troops abroad.

The defense has suggested that Manning's superiors ignored repeated signs of his emotional distress and should never have allowed him to deploy to Iraq or retain his security clearance.

"Bradley is certainly a person who had his heart in the right place and he was thinking about you ... the American public," defense lawyer David Coombs said.

Manning's older sister Casey Major and his aunt Debra van Alstyne talked about his traumatic childhood, when he was often abandoned by his alcoholic parents.

More than 100,000 people have signed a petition calling for his nomination for a Nobel Peace Prize.