The Simon Wiesenthal Center has called on Chancellor Angela Merkel to block a 100 million-euro German-Iranian natural gas deal, saying it would "embolden" a regime that seeks the destruction of Israel. 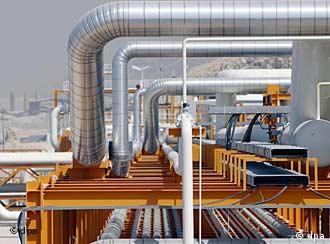 "It is an outrage that bureaucrats would be allowed to concoct a deal that thwarts the stated policies of the government of Germany," said Rabbi Abraham Cooper, associate dean of the Vienna-based Wiesenthal Center, in a letter dated Tuesday, July 29.

He was referring to a contract accepted by the German engineering company Steiner-Prematechnik-Gastec to construct three facilities in southern Iran that liquefy natural gas.

The disputed gas deal, reportedly worth 100 million euros ($157 million), was approved after a 12-month investigation by the German export control office, which concluded that the contract did not violate trade sanctions against Iran.

"Because the equipment would be built here and then sent to Iran, that work does not fall under any existing sanctions involving Iran," said export control spokesman Holger Beutel.

According to a report by the online edition of the Jerusalem Post, however, German parliamentarian Hartmut Schauerte put an undue amount of pressure on the export control office to give its consent to the contract. The office claims to be independent from overt political influence.

Germany has reduced export guarantees and German banks have largely stopped doing business with Iran in order to pressure the Islamic Republic to cease its uranium enrichment program.

Appeal to chancellor to stop deal

Cooper further criticized the deal, saying that it "helps Iran in this sensitive sector and makes a mockery of the international community's efforts to isolate a nuclearizing Iranian regime," reported AFP.

"Unless the chancellor overrules the export control office's decision, Germany will strengthen Tehran and further embolden a regime whose president repeatedly calls for the destruction of the Jewish state," he continued.

On a visit to Israel in March, German Chancellor Angela Merkel addressed the Knesset, where she said that a threat to Israel's existence was a threat to Germany and called Israel's security "non-negotiable."

Iran Preaches Friendship With US, Israel After Inconclusive Talks

The deputy to Iranian President Mahmoud Ahmadinejad said that Iran was now a friend of the US and Israel, Iranian news agencies reported Sunday, July 20 -- a day after nuclear negotiations with the West came to nothing. (20.07.2008)

German companies, especially hard hit by trade and economic sanctions against Iran, are worried they are losing lucrative contracts in the oil-rich region to countries such as China and Russia. (16.07.2008)

Read the report by Jerusalem Post, a partner of DW-WORLD.DE.