One of the world's most valuable sports teams has been stripped of its registered trademarks by US authorities, but the ruling won't hit the Washington Redskins where it hurts, says DW's Peter Dahl. 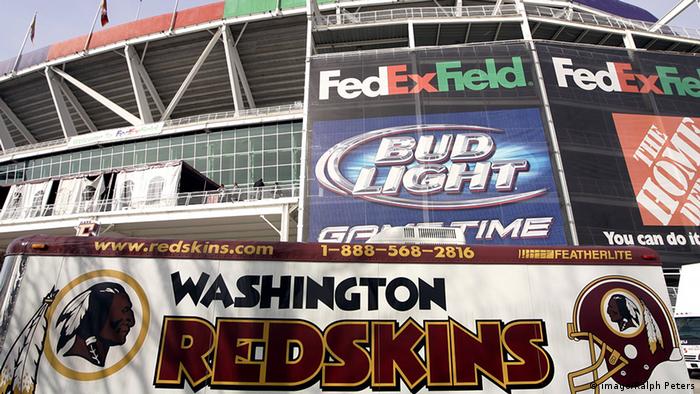 The US Patent and Trademark Office cancelled six of the Washington Redskins' trademarks, first registered in 1967, calling the team name "disparaging" to Native Americans.

The ruling marked the culmination of years of controversy surrounding Redskins owner Daniel Snyder, who has refused to cave to pressure to change the club's name - even when that pressure came from the world's most powerful man, US President Barack Obama.

This story is a case study in the mechanics of supply-and-demand and in the push-and-pull between the free market and government regulation.

Critics were quick to hail the 2-1 ruling as a victory for Native Americans. Senate Majority Leader Harry Reid (D-NV), who last month joined 49 other Democratic senators urging NFL Commissioner Roger Goodell to endorse a name change, said it was "just a matter of time until [Snyder] is forced to do the right thing and change the name."

"The writing is on the wall," Reid added. "It's on the wall in giant, blinking, neon lights."

When word got out that the Redskins were going to appeal the revocation, Washington, DC's representative in Congress, Eleanor Holmes Norton, scoffed:

"I don't know how many times [Daniel Snyder] needs to be told that the name is disparaging. I understand he says he's going to appeal…I mean, does he like losing?"

Not as bad as it looks

The thing is, it isn't at all clear that Snyder will lose. A similar decision from 1999 was overturned regarding the Redskins' trademark when a federal judge found no proof that the name was disparaging at the time the trademark was registered nearly 50 years ago.

Furthermore, while the ruling may be "a black eye to the franchise," as sports journalist and frequent ESPN panelist Kevin Blackistone told DW, it is unlikely to change Snyder's course.

For one, the Redskins will retain their trademark until their team of lawyers have exhausted all options for appeal - a process that could take years.

Even if the court decision is upheld, so-called common law rights would still protect things like the Redskins logo and team color combination. 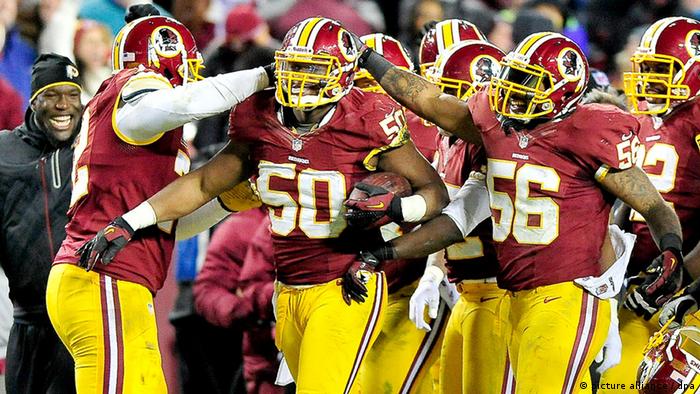 The Washington Redskins in action

That means that anyone looking to cash in on bootleg Redskins shirts would still be in violation of copyright laws.

Contrary to what many critics were hoping for, the franchise will still largely be in control of its crucial merchandise pipeline that feeds its billion-dollar business.

There is another, even more basic explanation why Snyder can afford to be stubborn: His core constituency is not in Washington.

Americans don't want their government regulating which words they can and cannot use - it's simply too Orwellian. In a supply-and-demand economy, it's not the president or Senate majority leader who is in the driver's seat, but rather the father buying his son a Robert Griffin III jersey (the league's 9th best selling shirt of 2013) or the undergrad waitress forking out her hard-earned tips for a back row seat at FedEx Field.

And as long as the fans continue to do that, regardless of whose feelings might get hurt in the process, things are unlikely to change.

"The ultimate tipping point will be when corporate sponsors no longer want to be associated with a team with a nickname labeled racially disparaging, or when customers of those sponsors back away for the same reason," said Blackistone, the journalist who is also a visiting professor at the University of Maryland's College of Journalism. "Or - and this would be a wonderful thing - if players decided in mass that they will not play for such a team."

To understand just how detrimental to a brand such a consumer backlash could be, one only needs to look back to the firestorm unleashed by Donald Sterling's racist remarks last month.

Within days, the disgraced LA Clippers owner went from head of one of the NBA's most promising franchises to being banned from the sport for life.

Moments like this have raised hopes that a new brand of social corporate responsibility is emerging - an era in which fair play means more than just keeping it clean on the court.

The fact that CEOs are now competing for the first crop of openly gay athletes, like Jason Collins or Michael Sam, also fits this narrative.

But not so fast, urged Blackistone.

"The fact remains that the outrage directed at Sterling was for bigotry he vocalized, rather than racist business practices he employed for years in Los Angeles that helped make him a billionaire," he said. "The fact remains that no one has turned their back on Washington's NFL franchise all these years, and as of yet still haven't."

The poll asked readers a simple question: Should the Redskins change their name?

The survey may have been unscientific but the answers were unequivocal: At the time of writing, out of nearly 200,000 votes, 64 percent said no, while just over a third wanted Washington to drop its controversial moniker.

Imagine this poll, if the team were called the Mississippi Sambos, or the Columbus Kikes. Half a century after the Civil Rights movements, such a response would be unthinkable.

Why? Because in the last two presidential elections, black voters have turned out in higher rates than whites. Because Jewish lobbyists are some of the most influential in Washington. In short, because these minorities have simply become too powerful to be brushed off.

The same could be said of the LGBT community, but not of Native Americans, who make up less than 2 percent of the US population.

"Native people, once the majority of [the United States], are now a decimated minority, so small they may as well be invisible," said Blackistone, who is African American. "They've been so marginalized that not even people of color, like the majority of players in the NFL, who are black, or Snyder, a Jew, empathize with them.

So, again, Native Americans find themselves at the mercy of their fellow Americans, hoping that they'll heed the call to arms and take the fight to Washington. But, as they say, sport is the opiate of the people. If ever there was a Hail Mary, this is it.