Nicole Kidman and Robert Pattinson couldn't rescue Werner Herzog's latest film, "Queen of the Desert." He could've explained how a female archeologist and spy helped shape modern-day Iraq and Syria - but he didn't.

With "Queen of the Desert" Werner Herzog must have envisioned a kind of "Lawrence of Arabia" from the female perspective. David Lean's 1962 film is still one of the most moving and impressive works on screen. And Gertrude Bell (1868-1926) - the British researcher, archeologist and spy whose life "Queen of the Desert" is based on - visited so many countries that even a jetsetter like Werner Herzog must sense a hint of envy when he reviews her biography.

Expectations rose when it was announced that superstar Nicole Kidman would be taking on the title role in "Queen of the Desert," teaming up with co-stars James Franco and Damian Lewis - not to mention teen heartthrob Robert Pattinson ("Harry Potter," "Twilight") in the role of T. E. Lawrence.

The life of Gertrude Bell, who went to places in the Middle East where her male colleagues had never dared to travel, offered plenty of material for cinematic dreams. It was Bell who explored Asia Minor and the Arab world, including modern-day Iraq and Syria; following World War II she worked for the British secret service and participated in the negotiations to adjust the political borders in the region.

The story couldn't be better for a daring director like Werner Herzog: A woman who was ahead of her time, an academic who far surpassed her male competition and who is still widely respected in Iraq today.

'Queen of the Desert' flops in Berlin

The disappointment was all the greater when the film premiered at the Berlinale film festival in the German capital earlier this year.

At the screening for industry members, some of the scenes were even ridiculed - though the tone was more friendly at the gala premiere that evening, in the presence of the cast and director. 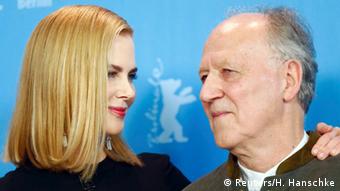 Herzog's desert epic is an utter failure. There's no other way to put it. Why? In the film that opens in German cinemas on Thursday (03.09.2015), the director only concentrated on the period prior to the outbreak of World War I, though the redrawing of borders in the region had a tremendous impact on the conflicts that would follow.

"Queen of the Desert" seems like historical cinema from bygone decades. The characters are one-dimensional at most. The Brits are cool and dashing; the Arab leaders are devious and gullible. And Winston Churchill is portrayed as a cinematic caricature.

In this man's world, Gertrude Bell (Nicole Kidman) prevails. Herzog may have stuck to the historical facts - but his characters are clunky and shallow.

But that also has to do with the cast. Superstar Nicole Kidman - who's been seen in cosmetic ads at least as often as on the big screen in recent years - floats like a well styled angel through the film, but isn't convincing in the role of the courageous, independent Gertrude Bell.

Kidman is only outdone (and not in a good way) by co-star Robert Pattinson, who offers a rather pale impression of Lawrence of Arabia. 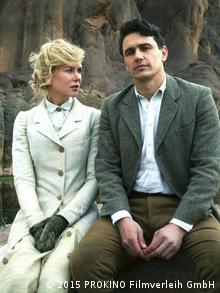 Gertrude Bell's story is one of unfulfilled love

The most incredible thing about "Queen of the Desert" is that is was made by cinematic master Werner Herzog - the director who is very familiar with the far corners of the globe and who's known for not shying away from the abysses of humanity.

Herzog offered film fans extraordinary characters in "Aguirre" and "Fitzcarraldo," which bordered on bizarre but were imbued with a lust for adventure. Still, Herzog didn't achieve this alone: Those characters were backed by the eccentric productivity of actor Klaus Kinski, who starred in those two films.

Herzog is neither an ambassador nor a letter carrier

The filmmaker didn't set out to make political-historical cinema. Ahead of the German premiere of "Queen of the Desert" in February, he said that if he wanted to send a message, he would have become an ambassador or a letter carrier. His admittedly sarcastic statement came in response to the question of whether he saw his film as a contribution to cultural understanding.

Herzog chose a different approach. After all, many films in the past have failed while pursuing a well-meaning political vision, and "Queen of the Desert" wasn't supposed to fall into that trap. Instead, Herzog relied on melodramatic effects, overwhelming images and dramaturgical concentration of historical events.

The only problem: It didn't work. The melodrama doesn't tug at any tear ducts; the images are nice, but already overplayed by countless nature documentaries. His dramaturgical concept was undercut by the actors' weak performances and the lack of character development.

It must pain every Werner Herzog fan to watch "Queen of the Desert."

He prays every night that no one will write his biography, Herzog quipped recently while shooting in Santa Cruz, Bolivia. "I don't want to know who's behind this face," he added cryptically.

Perhaps he should have applied that wisdom when he contemplated taking on the story of the British adventurer Gertrude Bell.

The Cannes Film Festival opens with heavy French fare, but German productions are few and far between. Stars like Cate Blanchett and Charlize Theron better keep their phones in their purses. (13.05.2015)

The Venice Film Festival is the oldest film festival in the world - and the one with the most beautiful backdrop. This year's program boasts veteran filmmakers and Hollywood buzz. But who'll be on the red carpet? (02.09.2015)

"Here's looking at you, kid!" Swedish-born actress Ingrid Bergman became a world star with Humphrey Bogart in "Casablanca." The 100th anniversary of her birth is being celebrated in Europe and the US. (28.08.2015)