Despite US pressure to stay out, Europe's four-largest economies, Germany, France, Britain and Italy, are set to join a China-led regional bank, seen as a potential rival to the US-based World Bank. But why? DW examines. 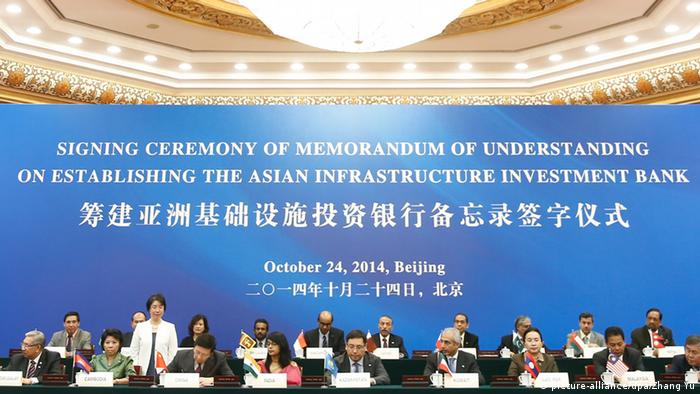 Initiated by China only last October, it is already being touted as a potential rival to established financial institutions such as the World Bank and the Asian Development Bank (ADB). Headquartered in Beijing, the Asian Infrastructure Investment Bank (AIIB) - for which China is set to provide up to 50 percent of its $50 billion initial capital - is designed to finance infrastructure projects in areas such as energy, transportation, and communication in Asia, the world's fastest-developing region.

The rationale behind it is that given Asia's rapid economic expansion, the existing global financial institutions such as the World Bank and the ADB - criticized by many as dominated by the US and Japan respectively - can no longer satisfy the region's needs due to their limited capital and adoption of different priorities.

But there is also a political element to the initiative, as many analysts view the bank - set to open by the end of this year - as a further means of spreading Beijing's "soft power." Rapid growth has transformed China into the world's second largest economy, but its ability to play a proportionate role in development finance through the World Bank has been constrained by the low voting rights currently allocated to the East Asian nation.

This is why over the past couple of months, Beijing has played a key role in launching initiatives such as new development bank (NDB) and the new Silk Road Fund, which are designed to increase infrastructure financing for developing countries. But while the AIIB is just one of these initiatives, it seems to be rapidly gaining global traction. More than 30 countries have already announced their intention to join the China-led development bank as founding members, including some of Europe's largest economies. 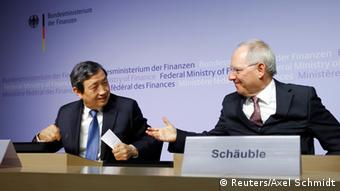 On Tuesday, March 17, France, Germany and Italy stated they would follow Great Britain's lead and join the proposed institution

On Tuesday, March 17, France, Germany and Italy stated they would follow Great Britain's lead and join the proposed institution despite skepticism from Washington, which has voiced concerns over looser lending standards as well as environmental and social safeguards. South Korea, Switzerland and Luxembourg were also considering joining, according to China's official Xinhua news agency.

But why would major European economies be so keen on joining a development bank for Asia against the advice of their ally, the United States?

Analysts argue that while these nations have their own differing explanations for joining the AIIB, they all believe that the possible benefits from a stronger relationship with China, the world's second-largest economy, outweigh whatever perceived negatives such a decision entails.

For instance, Margot Schüller, a senior research fellow at the Germany-based GIGA Institute of Asian Studies, points out that all of these European countries have not only strong economic ties with China and other Asian countries, but also long-term experiences in development finance which they offer to the new regional development bank. So given the huge unmet demand for power, transportation, water and communication, European companies will also be eager to join in the construction of modern infrastructure in Asia.

Against the advice of the US, several European nations have decided to join the China-backed AIIB development bank. Washington had expressed concern over funding transparency and competition for the World Bank. (17.03.2015)

Moreover, the decision can be viewed as a sign of European goodwill or a vote of confidence in China's contributions to global development and order. Some countries, however, will no doubt hope that the favor will be returned by Beijing, perhaps through trade deals or by receiving preferential access to some of China's sectors that are difficult for foreign firms to operate in, as Fredrik Erixon, director of the European Centre for International Political Economy (ECIPE), told DW.

China not only has more than US$4 trillion of foreign reserves - the world's largest - but its currency, the Renminbi - or Yuan, has become the world's second most used trade finance currency and the seventh-ranked global payments currency. And most of Europe's major central banks have added – or are considering adding - the Chinese currency to their portfolio - often at the expense of the dollar.

'If you partake, you have a stake'

China has also stepped up its financial penetration in Europe, both in terms of investments and monetary connections. In the case of the UK, for instance, the desire to ensure that London remains a global center of finance seems to have been a motivating factor, as being in the bank will strengthen the City's bid to manage AIIB transactions, Hugh Jorgensen, a Netherlands-based expert on global economic governance, told DW.

And if the UK is prepared to accommodate China in this way, despite objections from its "special ally" the United Sates, then the other major European powers presumably don't want to be left behind, he added.

Thomas Koenig, a government affairs policy analyst at the European Union Chamber of Commerce in China has a similar view. He argues that now that China has shown it wants to get more involved and live up to its regional stakeholder responsibilities, it makes sense for major European nations to join in.

"Simply put, if you partake, you have a stake, and will likely be involved in decisions that shape the overall organization - this is what the major European nations are looking for. And if all goes well, the AIIB could be a way to further deepen ties between China and Europe and increase Europe's overall involvement in Asia." 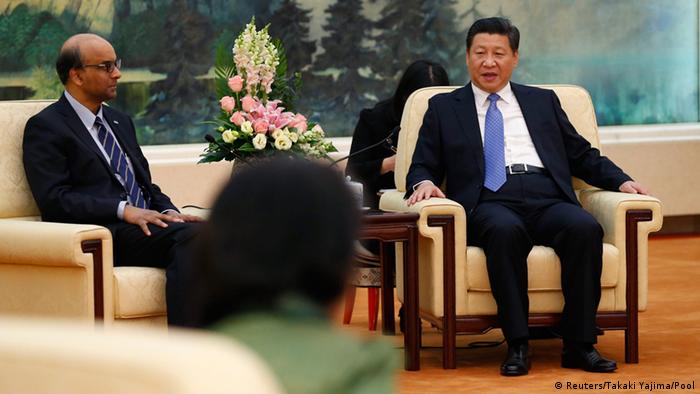 What can Europe provide?

The level of influence Europe will have on the bank's decision-making process will ultimately depend on its structure. Nonetheless, many argue that it is in the AIIB's best interest to follow the best practices of other established global financial institutions and that, in this context, European input could only help the bank gain global legitimacy.

"Like any other bank, the AIIB needs to sell a compelling story to potential clients as to why they should trust them - and not another body like the World Bank or the ADB - with their financing needs. The endorsement of the major European powers will go some way to aiding this endeavor, as it will help to ameliorate concerns that the AIIB is simply a Trojan horse for Chinese ambition," said Jorgensen.

A German Finance Ministry statement announcing the plan to join the AIIB shed some light on Europe's intentions in this regard: "France, Italy and Germany, in close coordination with international and European partners, are keen to work with the AIIB founding members to establish an institution that follows the best standards and practices in terms of governance, safeguards, debt and procurement policies."

Mikko Huotari, head of the foreign policy and economic elations program at the Germany-based Mercator Institute for China Studies, explains that European influence could potentially stretch to ensuring transparency in lending practices, shaping the priorities and governance of the new bank, as well as securing investment possibilities also for European actors, for instance through public-private partnership arrangements.

Analysts, however, are divided as to whether the new China-led financial institutions should be regarded as competitors or as complementary institutions to the World Bank and ADB which can contribute to the overall infrastructure of developing Asia. 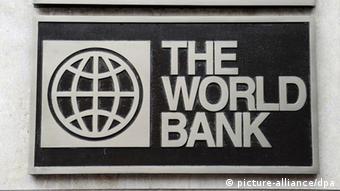 Nicola Casarini, a senior fellow for Asia at the Rome-based Istituto Affari Internazionali, argues that China has not hidden its intention to challenge the Western-dominated financial system. "The AIIB could indeed become a rival to USD-based Western institutions such as the World Bank," he said, adding however, that this would depend on the evolution of China-US relations in the coming years.

A setback for Washington

But regardless of this aspect, experts agree on one key issue. The AIIB's emergence will increase the pressure to reform the governance in the World Bank - especially in regard to the emerging economies' voting rights – and the US-based bank's relevance will only wane the longer it takes Washington to agree to this.

Moreover, European support for the AIIB is being widely regarded as a blow for the US. "At least in terms of public diplomacy it was a major setback for Washington because of the mixed and incoherent messages it has been sending," said Huotari.

However, the most interesting aspect probably comes down to how much pressure Beijing will be facing in terms of handling its new "multilateral" profile. "China was probably not really prepared for the high public attention and the difficulties of becoming a creator of new multilateral frameworks," said Huotari, adding that inside China intense debates were taking place over how these new financing instruments should be used to maximize Chinese interests and how they fit into China's foreign policy and economic agenda.

"Setting up the AIIB will certainly be a difficult task to handle - with diverging domestic interests and having experienced players on board with their own agenda."