Why Dubai plans to build infrastructure in Kashmir | Asia | An in-depth look at news from across the continent | DW | 25.10.2021

Dubai's accord with the Indian government to build infrastructure in Jammu and Kashmir comes at a time when the volatile Himalayan region is witnessing a resurgence in violence. 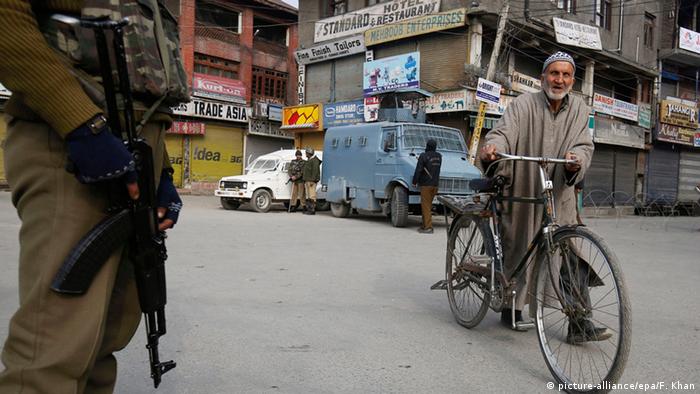 Kashmir has witnessed armed insurgency against New Delhi for decades

The government of Dubai, one of the UAE's seven emirates, recently inked an agreement with India to ramp up infrastructure investment in Jammu and Kashmir.

"The world has started to recognize the pace (at) which Jammu and Kashmir is traversing on the development bandwagon," Indian Trade Minister Piyush Goyal said in a statement.

Sultan Ahmed Bin Sulayem, chairman and CEO of DP World Dubai, told media in Srinagar: "We are committed to connect Jammu and Kashmir to the rest of India. We know how to do that, we know the obstacles."

No figure for the value of the accord was given but Sulayem pointed out that the investments by his firm will be part of the Modi government's "Make in India" initiative.

This is the first investment agreement by a foreign government involving Kashmir sinceNew Delhi scrapped the region's special status in 2019 and divided the Muslim-majority state into two territories directly ruled from the Indian capital.

The deal comes amid an uptick in violence in the heavily militarized region — as evidenced by a spate of militant attacks on civilians and a widespread crackdown by security forces that has left several people dead.

Suspected militants have killed at least 11 civilians, including five migrant workers, in Kashmir since early October.

Indian authorities were recently forced to move thousands of migrant workers in Kashmir to safer locations overnight as hundreds fled the Himalayan valley after a wave of targeted killings.

The killings led to widespread unease, particularly among the region's religious minority Hindus — locally known as Pandits — an estimated 200,000 of whom fled Kashmir after an anti-India rebellion erupted in 1989.

The trigger for the latest wave of attacks remains unclear, even though Kashmir has witnessed armed insurgency against New Delhi for decades.

Analysts say the investment agreement is a clear message that economic development and building peace go hand in hand, even in the middle of heightened security concerns.

"At this point, Kashmiri society is undergoing such upheaval — especially given the targeted killings of migrant workers — that I really do wonder which outside investors will ultimately see their investments through in the region," political scientist, Navnita Behera told DW.

Some believe the new pact with Dubai is an attempt by New Delhi to gain international legitimacy for its actions in Kashmir over the past two years.

"The first test of legitimacy is whether the affected people accept an action as legitimate. Using this yardstick, Dubai's investment does not legitimize the removal of special status as far as Kashmiris are concerned," Radha Kumar, an academic and expert on Kashmir affairs, told DW.

Nevertheless, an influx of investment from Dubai will boost the Kashmiri economy, he added.

"If there is an inflow of investment from Dubai, it will surely provide a much-needed boost to Kashmir's economy, which has suffered enormously following the hollowing out of Article 370 [the law that granted special constitutional status to the region] and the measures that have followed," the expert underlined.

The UAE is a strategic partner to India and the two countries have a strong bilateral relationship based on common geopolitical and economic interests.

The UAE does not consider the Kashmir crisis a threat to the Muslim community, rather a conflict between two countries that could be resolved through negotiations," Nagapushpa Devendra, an expert on the Middle East, told DW

That view is shared by Mohammed Muddassir Quamar, associate fellow at the Manohar Parrikar Institute of Defence Studies & Analyses.

"As far as the Kashmir issue is concerned, the UAE has come a long way from seeing the issue through the Pakistan prism, which was the case until the 1990s," he told DW.

"It now recognizes that India and Pakistan have a dispute over the territory but maintains that these are internal and bilateral matters of the two, and the UAE has no stake in the dispute," he added.

Although the UAE has attempted to facilitate dialogue between India and Pakistan whenever the situation in Kashmir became explosive, the Middle Eastern nation no longer takes sides, experts say.

And when New Delhi revoked Kashmir's special status, the UAE was one of the first countries that backed India, saying it viewed the decision as the nation's "internal matter."

Business delegations from Kashmir have been visiting Abu Dhabi and Dubai since then and have participated in a number of gatherings facilitated by Indian business associations.

"Hence, it does not come as a surprise that Dubai has agreed to invest in the region. As far as the motivation for investments is concerned, it is a business decision and, despite the risks involved, Dubai investors are upbeat about it because it offers an opportunity," said Quamar.