Why cricket in Pakistan is infused with religion and nationalism | Asia | An in-depth look at news from across the continent | DW | 29.10.2021

Why cricket in Pakistan is infused with religion and nationalism

Cricket in Pakistan has become all about politics and religion, with narratives like "avenging" the "mistreatment" of Muslims by defeating India, or "teaching a lesson" to New Zealand for walking away from a match. 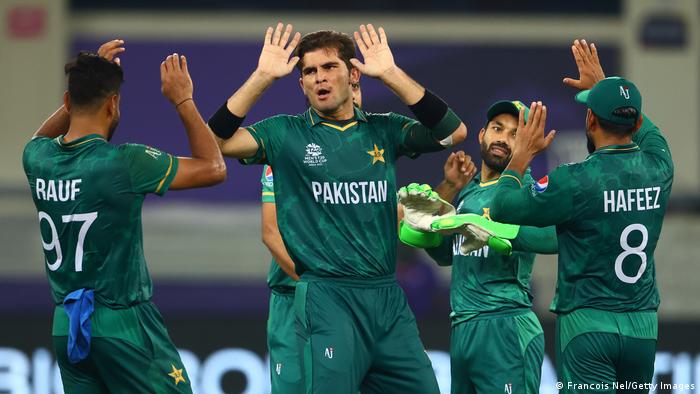 "Muslims all over the world are rejoicing," the minister said in a video message on Twitter.

It was the first time Pakistan dominated India in a World Cup match. Celebrations were naturally in order, with people across the country taking to the streets, chanting patriotic slogans, dancing and waving national flags.

Relations between India and Pakistan have been acrimonious since the two countries gained independence from British rule in 1947. They have fought three full-fledged wars, and they continue to accuse each other of interfering in the disputed Kashmir region, which they both claim in its entirety but rule in part.

The geopolitical hostility has spilled over into sports, especially cricket, which is the most popular sport in both India and Pakistan. After India's defeat on Sunday, Pakistani social media was inundated with anti-India posts, memes, and comments.

In the past, the India-Pakistan cricketing rivalry was punctuated with nationalistic sentiment, and more recently, religion has also started playing a big part.

Many Pakistanis believe that Prime Minister Narendra Modi's government is curbing the rights of Indian Muslims.

Pakistani Prime Minister Imran Khan has repeatedly dubbed the Modi government a "fascist regime," accusing it of unleashing violence on Muslims, not only in India-administered Kashmir, but in other parts of the country as well.

Experts say Interior Minister Ahmad's "victory of Islam" statement should be viewed in the same light, as it implied that Pakistan "avenged" the "Indian atrocities" against Muslims.

"Many Pakistani politicians tend to bring Islam into everything. Those in power, who are failing to do what they were elected to do, do it more often. Islam is their last resort," he added.

Until the 1990s, most Pakistani cricketers kept their faith away from their profession. Many of them were clean-shaven, and some, like Pakistani Prime Minister Imran Khan, who won the cricket World Cup in 1992, were British educated.

In the past two decades, many Pakistani cricketers joined the Tablighi Jamaat, an Islamic missionary group that has millions of followers in the country.

Khan, who was once known for his "playboy" image in the UK, is now a conservative politician, who believes that the Western cultural influence is corrupting young Pakistanis.

Many cricketers now use religious terminology in their press conferences, and some even prostrate on field after a victory.

Former Pakistani fast bowler Waqar Yunis got so carried away with the gesture that he told a Pakistani news channel that watching Rizwan offering "namaz" (the Muslim prayer) "in front of Hindus was very special to him."

Younis later apologized for his comments: "In the heat of the moment, I said something I did not mean."

But Qaiser Iqbal, a 39-year-old Karachi-based supporter of Khan, said that "praying during a match gives a psychological boost to players."

"They feel satisfied that they did their best, and now it is up to God to help them," he told DW.

"But I think hard work is also needed to win a game," she added.

But what has prompted Pakistani cricketers to become overly religious on and off field?

"There hasn't been much research on this topic, but few academics and journalists have tried to understand the phenomenon," Farooq Sulehria, a researcher and journalist, told DW.

"We must understand that cricketers are part of society, and Islam has become the 'monoculture' in Pakistan. Cricketers, film stars and other celebrities simply jump on the bandwagon," he added.

According to Paracha, the Islamization of cricket in Pakistan started in the early 2000s when the Tablighi Jamaat movement managed to recruit some leading cricket players as its members.

"The team had performed badly in the 2003 World Cup, and the squad was already under scrutiny for being match-fixers. This served a signal for repenting and redemption. Exhibition of religiosity peaked between 2003 and 2007," Paracha explained.

Cricket as a social distraction

Sociologists say that ruling classes all over the world use sports as a distraction from real political issues.

In Pakistan, cricket serves the same purpose. During cricket tournaments, people tend to forget about misgovernance and staggering inflation and take refuge in nationalism.

"Cricket has become increasingly associated with politics in India and Pakistan," Paracha underlined.

Sulehria is of the view that sports could also play a positive role. "If you look at the situation in Afghanistan, cricket has become a symbol of resistance against the Taliban. But in India and Pakistan, the ruling classes are using cricket to distract people from their oppressive measures."

Pakistan is currently facing one of the worst economic crises in its history. Khan has been strongly criticized for rising inflation and the depreciating currency value. Yet, cricket provides his government a chance to "unify" the country.

"Khan has definitely benefited from the infusion of nationalism and cricket, but his popularity is declining. It can't save him for long," according to Sulehria.

Khan, who entered politics after retiring from professional cricket in 1992, has been considered by experts as one of the biggest beneficiaries of widespread depoliticization in Pakistan.

Before emerging as an important political player in the country, Khan was hailed as a "messiah" who won the country its first World Cup.

His supporters believe that if he could "miraculously" deliver the sport's most-prestigious trophy to Pakistan, he could also "fix" the country's myriad problems.

"I think Imran Khan can rid the country of corruption. He can make Pakistan strong, like he did with his World Cup-winning cricket team. But he needs a better team in governance," Lahore-based banker Nazar said.

Analysts say that cricket is responsible for "depoliticizing" Pakistanis, who believe in simple solutions to complex problems.

Analyst Paracha agrees: "Cricket in India and Pakistan has become a political tool; it's not just another sport anymore."