Why COVID cases are rising again in some Indian states

As cases go down in the rest of the country, the states of Maharashtra and Kerala continue to log relatively high COVID numbers despite vaccinations gaining pace. 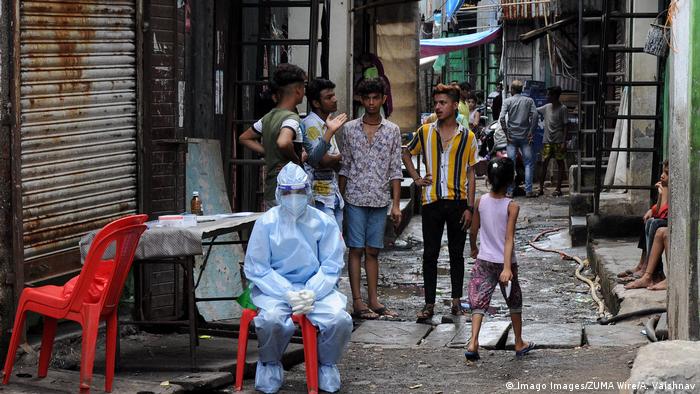 After India’s deadly second wave in April and May, cases declined all over the country, even as restrictions eased. The past couple of months have seen a spike again in the western state of Maharashtra and the southern state of Kerala.

Experts are warning of a potential third wave in October amid the upcoming festival season, with the 11-day Hindu Ganesh Chaturthi festival kicking off Friday.

State governments are introducing measures to clamp down on mass gatherings.

"The third wave is not coming, it is already here," Mumbai's mayor Kishori Pednekar told reporters on Tuesday.

In a meeting last week, the central government emphasized that there was no room for complacency when it comes to preparedness.

Rijo M. John, a health economist based in Kerala, said: "Cases in Kerala are high because it still has a high proportion of uninfected population, and the delta variant is still catching up."

But following a spike, John says case numbers in both Maharashtra and Kerala are beginning to stabilize.

"The cases [especially the 7-day averages] are not rising… In both states, it is either steady or declining," he told DW.

India's vaccination program has also gained pace despite a slow start. The country now has the highest number of people in the world to have received at least one dose of the COVID vaccine. However, with a large population, the total number of those vaccinated remains under 14%.

"If a third wave happens, we are better equipped, especially for middle-aged and senior citizens due to high vaccination numbers," Niranjan Patil, a doctor in Mumbai, told DW. He added that his private hospital now has "better treatment regiments and care strategies" in addition to improved infrastructure.

"However, we must be better prepared for the unvaccinated, and for pediatric care," he said.

Both Maharashtra and Kerala have high inoculation numbers, with Maharashtra being among the top states in the number of adults who have received both doses.

But new variants are still causing some concern among health experts.

Indian authorities are collecting more data to decide whether to provide booster shots, as some countries have done.

Maharashtra and Kerala state authorities have so far ruled out the need for another lockdown.

A few restrictions and curfews are still in place, but another lockdown could also be risky for the country’s economy.

"I don’t think there will be need for another lockdown," John told DW.

"Kerala’s healthcare system is able to manage the current spread which has relatively less hospitalizations largely owing to the increased vaccine uptake in Kerala. In Maharashtra too, there is no sign of a rise in cases and a lockdown is out of question," he said.

Spread of 'delta plus' variant in India worries experts

COVID cases have relatively remained lower in the rest of India. Studies show a north-south divide between Maharashtra and the rest of the southern states having a high caseload, and northern states seeing declining numbers.

Some health experts have attributed this to a higher rate of testing and tracking in these states.

The World Health Organization (WHO)’s chief scientist Soumya Swaminathan said India appears to have reached an endemic stage, where the population learns to live with the virus.

"Particularly where there is a more susceptible population, those groups who were perhaps less affected by first and second waves, or areas with low levels of vaccine coverage could see peaks and troughs for the next several months," she added.

The financial crisis caused by the pandemic has left young graduates with limited job prospects. Experts say it could take years for the job market to make a full recovery.