Why are some nonfungible tokens so expensive? | Business | Economy and finance news from a German perspective | DW | 27.11.2021

Why are some nonfungible tokens so expensive?

Most are worthless, but some sell for millions: Experts explain to DW what they know about the mysterious price of nonfungible tokens, and why this crypto-asset may have rough days ahead. 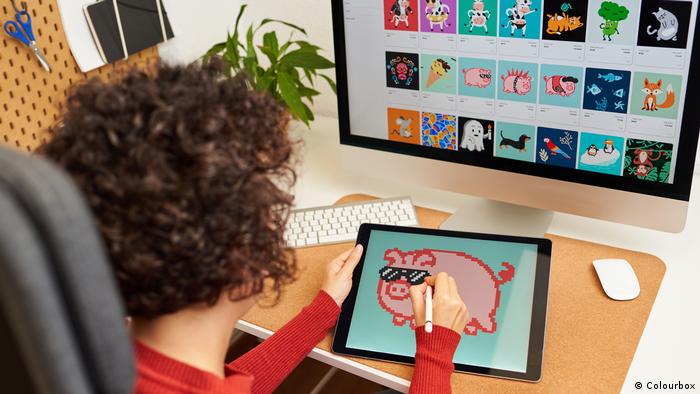 Nonfungible tokens (NFTs) burst onto the scene earlier this year when some of them started pulling in millions of dollars at auctions. A confusing and controversial new digital asset is on the rise. DW's own experiment selling an NFT made a smaller splash. Which made us all the more curious: Why are some so expensive?

Patrons of the arts?

First, a reminder: NFTs prove ownership of digital files. They can represent digital works of art but can also be associated with video game accessories, collectors items and more. Anything that can be stored as data on a blockchain can be an NFT. NFT transactions are recorded publicly on a blockchain and often bought with cryptocurrencies.

In October, an experiment by The Economist pulled in $420,000 when the weekly newsmagazine auctioned off an NFT of one of their cover pages. An issue about decentralized finance, the cover art portrayed cryptocurrencies alongside images from the children's book Alice's Adventures in Wonderland. Buyer @9x9x9 told The Economist it was the fitting title — "Down the Rabbit Hole" — that compelled them to purchase the data file of the cover.

But buyers of breathtakingly expensive NFTs point to a whole range of reasons for spending big bucks for the rights to a data file that anyone else can view or copy. Cryptocurrency entrepreneur Vignesh Sundaresan spent a record-breaking $69 million on an NFT earlier this year. The NFT enthusiast, who has invested in the technology, denied that he was trying to push up prices. He said he wanted to support the artist and showcase the technology.

For other buyers, it's about scarcity. "The buyer knows how many will be made and has blockchain proof of ownership," American billionaire and NFT collector Mark Cuban told online news portal Business Insider.

What the data says

Researchers at the Alan Turing Institute (ATI) wanted to know what the data said about this phenomenon.

"What we observed is that there is this gigantic heterogeneity in the success of NFTs," Andrea Baronchelli, associate professor in mathematics at the University of London and ATI's token economy theme lead, told DW. "Some — very few — do very well, a bunch do decently, and the majority are worthless."

Earlier this year, ATI's team of experts completed a study which looked at the role certain factors play in the price of NFTs. They looked at three components: the NFT's visual features, previous sales of related NFTs and the social network of the buyer and seller.

Researchers used a machine learning model to consider a dataset of 4.7 million NFTs exchanged by over 500,000 buyers and sellers. The result? Past sales of related NFTs was the most important of these three factors, accounting for over 50% of the price variance.

For example, past sales of NFTs from the CryptoPunks collection, a prominent set of 10,000 tokens depicting pixel images of punks, would be a good indicator of future sales of tokens from the same collection.

Visual features were the second-most important aspect. Including this data increased the performance of the machine learning model by up to 20%. Data showing the popularity of the traders increased performance by 10%.

Combined, they concluded these three factors can explain up to 70% of the variability in NFT prices. They plan to look at more factors in the future, including the platform where the NFT is sold and the activity of the creator on social media.

In the market for NFTs of digital artworks, one can recognize something of the traditional art market, where scarcity, social networks and, often to a lesser extent, content of the art piece help determine an object's worth. But NFTs have some features that distinguish them from their real world counterparts, said Mauro Martino, director of the Visual Artificial Intelligence Lab at IBM Research and ATI study co-author.

"A very big difference between the art market and NFTs is that the artists take 10% to 20% from the secondary sales," he told DW. "So anytime the piece will sell again, part of the sale will always go to the artist. This is really a novelty in the idea of art and can be a big game changer for artists."

This is possible because future sales of NFTs are recorded on blockchain, which allows artists to receive their cut automatically.

A JPEG of a rock

That is good news for anyone whose NFT has generated some money. But what about the majority that aren't worth much at all?

"There are 10,000 new pieces each and every day ready to go...I don't know where," said Martino. "There are not 10,000 new buyers every day to sustain this incredible production."

Stability in the NFT market would require greater attention from the public to attract traditional investors, as well as greater comfort with cryptocurrencies, the experts said. This development is likely still years away, and surprises could pop up in the meantime.

"If we notice that enthusiasm for NFTs today is very similar to the enthusiasm for cryptocurrencies at the very beginning, then we can expect some major correction," said Baronchelli. This would have unclear implications for this nonfungible asset.

"If I have bitcoin and it goes down 40%, I still have 60%," he said. "If I have a JPEG of a rock? What happens to the value of that JPEG? We don't know, because there is nothing similar."

Alan Turing Institute report on the price of NFTs

Alan Turing Institute report on the price of NFTs