Who will stop the right-wing Jewish terrorists? | World| Breaking news and perspectives from around the globe | DW | 03.08.2015

A baby dies of burns; a girl from stab wounds: Israel is shocked after the violent attacks over the weekend. The government has pledged to fight Jewish terrorism, but hatred of Arabs and homosexuality runs deep. 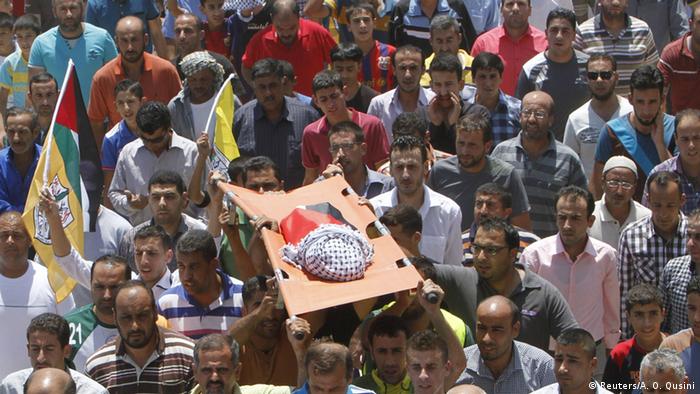 "Violence erodes the basis of Israeli democracy. It must be condemned and isolated." Shortly after the then Israeli Prime Minister Yitzhak Rabin uttered these words in November 1995, he was gunned down by Yigal Amir, an ultra-right wing Jewish extremist. Rabin's assassination plunged the nation into a deep crisis.

Today, many Israelis are reminded of the days when the divide between the ultra-right wing extremists and liberals in the country widened to the point that it seemed insurmountable. On Thursday, an ultra-Orthodox Jew stabbed participants of Jerusalem's Gay Pride parade and one of the victims, a sixteen-year-old girl, died as a result of her injuries. Radical Jewish settlers were suspected of setting fire to a Palestinian family's house near Nablus and thereby killing a toddler. The child's brother and parents are still in critical condition.

Hate within the government

"There is not one single politician in Israel in the whole spectrum, from the far-left to the very far-right, who supports these two acts of terrible murder," says Gideon Aran, a professor for sociology at the Hebrew University of Jerusalem. Nonetheless, there are a few ultra-right-wing politicians who have incited hatred with their racist, anti-Arabic or homophobic slogans. 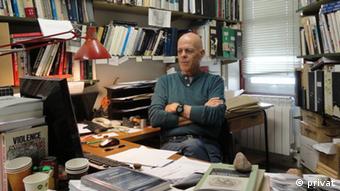 'Only a few crazy people do things like this,' says Aran

"There are only a few crazy people who do things like that," says Aran. Nonetheless, there is an affinity, a hidden and mostly unintentional emotional connection to the more sensible and conventional right-wing politicians, and it exists in the coalition, he added.

Witch hunt after the 'Beast Parade'

The government leans heavily to the right like no other has in the almost seventy-year history of the country. On Sunday, Prime Minister Benjamin Netanyahu announced that he will "fight with all his might against the phenomena of hatred, fanaticism and terrorism on any side." But he has also been accused of subliminally fueling resentment against Arabs. On the day of his re-election on March 17, he had warned of Arabs who "flocked to the polls" and subsequently drew international criticism for his comment.

His coalition partner, the ultra-nationalist Jewish Home party, however, maintains an openly homophobic and anti-Arab stance. The current justice minister, Ayelet Shaked, caused an international outcry last year when she referred to Palestinian children as "little snakes" on her Facebook page and stated that the bombing of civilians was justified. Shaked's fellow party member, Knesset MP Bezalel Smotrich called the Israeli media's response to the gay pride murder a "bizarre, undemocratic witch hunt." Incidentally, Smotrich had previously referred to Gay Pride as the "Beast Parade."

The unwritten law of Jewish radicals 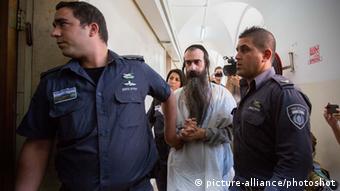 However, even violent, ultra-religious circles condemn the attacks on the Jewish Gay Pride revelers. "Radical right-wing elements in Judaism or in Israel make a very clear distinction between committing crimes, certainly murdering fellow Jews and non-Jews," says the sociologist, Aran. "Many would never act against a Jew. This unwritten law has been heeded for years." That is why the knife attack on Jerusalem's gay pride parade has divided ultra-Orthodox Haredi Jews. "The majority of them, however, condemns the act and feels guilty and responsible, at least according to their public statements."

The ultra-nationalist Jewish settlers share the same view. "The vast majority of them condemns the crime, the murder of the baby in Duma. But there are some here who support the perpetrators." Aran believes that the settlement movement will be weakened by violence, as moderate, right-wing Jews may walk away from it.

The uncle's appeal to the people

In addition, the Israeli government has announced that it will crack down on Jewish and Palestinian terrorism. On Sunday, the cabinet decided that Jewish suspects may be held without charges or a defense attorney. "We will see many arrests and tougher law enforcement," says Aran.

Thousands of people in Israel took to the streets to protest against hate and violence. Nasser Davabsha, the uncle of the murdered infant, spoke at a demonstration in the center of Tel Aviv. "We demand to put an end to the suffering of our people. We want the fires to stop burning," he said to the crowd. The demonstration took place on Kings of Israel Square, where Yitzhak Rabin spoke of hope and peace just before he was assassinated. Soon after his death, it was renamed Rabin Square.

In wake of attacks, Israel extends detention without trial to Israeli citizens

After extremist attacks, the Israeli security cabinet has approved the detention without trial of citizens suspected of attacking Palestinians. "Administrative detention" had been used only for Palestinian suspects. (03.08.2015)

Jewish extremists are suspected to be behind the Nablus arson attack. Extremists are also among those seeking to build more settlements on the West Bank - but not just politically motivated Israelis are moving there. (03.08.2015)

A 16-year-old girl who was stabbed by an anti-gay extremist at a parade in Jerusalem has succumbed to her injuries. Her organs are to be donated. (02.08.2015)