Who will save Tunisia's democracy now?

Tunisia's president has been carrying out a creeping coup, demolishing the country's hard-fought democratic gains bit by bit. With an economy in turmoil and a splintered opposition, is there anybody that can stop him? 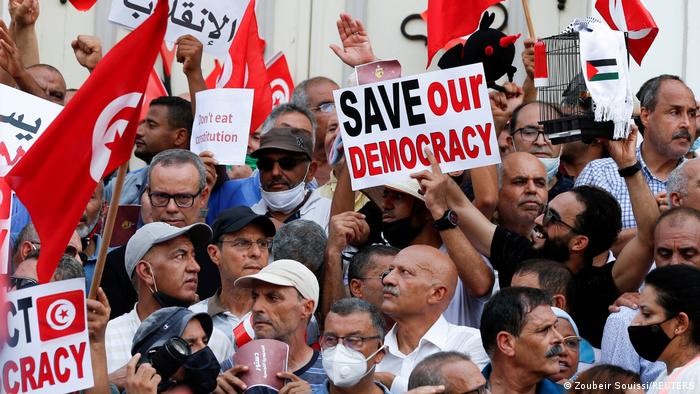 Haneen Habbessi is feeling betrayed. The 38-year-old public servant based in Bardo, a small city west of the capital, Tunis, voted for her country's current president, Kais Saied, when he ran for office just over two years ago.

"I defended him fiercely even though we did not know anything about him," she said of the conservative former lawyer, who competed without a political party and promised to fight corruption.

Saied's most recent moves have upset Habbessi though. On April 22, Saied announced he would be taking control of the country's election commission, the Independent High Authority for Elections, or ISIE.

The ISIE was created to ensure that national ballots are legitimate. But last week, Saied said he would replace most of the commission's members. 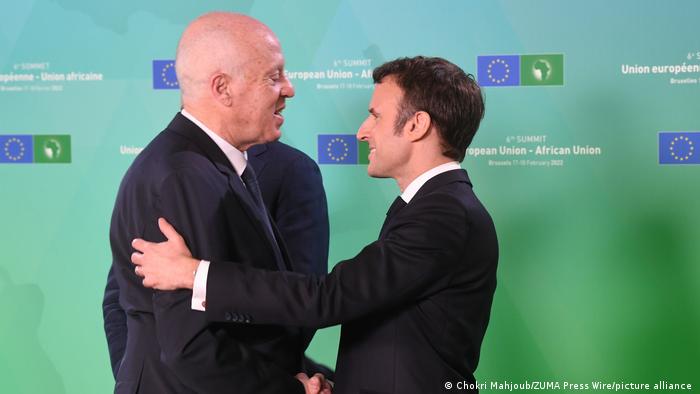 "He took the 'I' [for 'independent'] out of the commission's name," Monica Marks, an assistant professor of Middle East politics at New York University in Abu Dhabi and an expert on Tunisia, told DW. "So any elections organized by the ISIE now are going to be unfree and unfair, and will accelerate the consolidation of his [Saied's] dictatorship."

Ben Ali was in power for over two decades, until revolution in 2011 pushed him out during the so-called Arab Spring.

Now many Tunisians worry that their current president is heading towards autocracy. Saied had already more or less taken control of the country after he suspended Tunisia's parliament in July 2021. He argued that infighting among parliamentarians, political gridlock, corruption and economic crisis, alongside the COVID-19 pandemic, required a total reset. 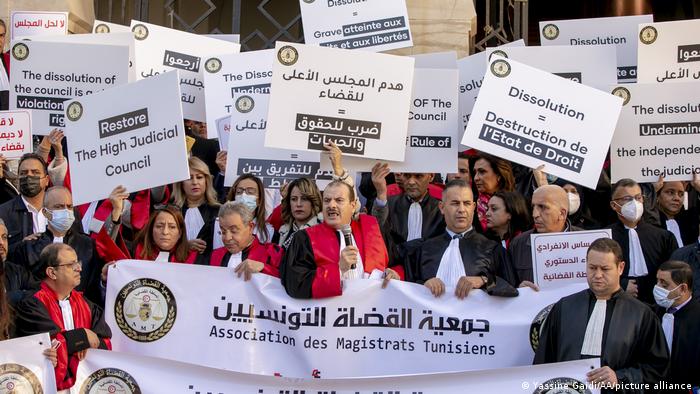 In February 2022, Saied gave himself judicial oversight and the power to sack judges

Like Habbessi, many Tunisians welcomed Saied's move at first, even as others feared he would become Tunisia's next dictator.

Over the past 10 months, those fears have come closer to being realized, even while many still hesitate to call Saied's actions a coup. In fact, it's been more like a creeping coup, carried out in increments.

"What we are seeing is democratic backsliding," Hamza Meddeb, a non-resident scholar at the Carnegie Middle East Center and an assistant professor at the South Mediterranean University in Tunis, told DW. "It could eventually end in a sort of authoritarian regime. This is not the case today but might be in the coming months."

Since last summer, Saied has taken control of the country's judiciary, shut down its parliament and dismissed its prime minister, then appointed a new one, as well as increasingly jailed or persecuted opponents. The 64-year-old now rules Tunisia by decree. 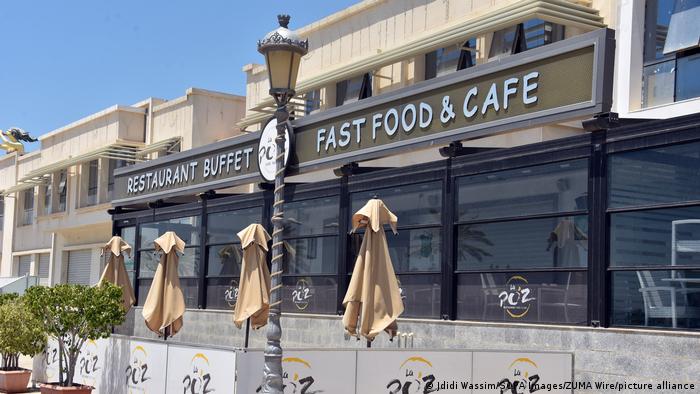 An estimated 80,000 small and medium sized businesses failed in Tunisia during the pandemic

The question now, as all the institutions with any political power gradually fall under Saied's control, is this: Who is left to save Tunisia's democracy?

The Tunisian opposition is fragmented and features various political parties at loggerheads, Meddeb and Marks said.

The country's largest party, Ennahda, has been the most significant power in parliament since the 2011 revolution. As a result, many locals blamed the center-right, religious party for Tunisia's various ailments. This has made it very difficult for other parties to work with Ennahda, even if they are all opposed to what Saied is doing.

However this week, Ennahda became one of five political parties to join a new coalition opposed to Saied's rule. The new National Salvation Front, which includes political rivals as well as civil society groups and independent politicians, said it wants to set up an interim government to rule Tunisia until the next elections, planned for December.

At a press conference in Tunis on Tuesday, the left-wing politician who organized the new coalition, Ahmed Nejib Chebbi, told reporters, "we want a return to legitimacy and democracy."

It is also possible that ordinary Tunisians will take to the streets to protest again, Mourad Abdellaoui , a 46-year-old teacher in Tunis, said.

"I believe the Tunisian people are still divided though," he told DW. "Some people feel the president is doing the right thing, others see it as unconstitutional. But they may well try to exercise pressure by calling for mass demonstrations again."

A repeat of what she calls "rebellious masses in the streets" is one of Hathria Benatia's greatest fears. "I didn't like Saied's speech from the beginning," the 75-year-old pensioner from Siliana, a town in northern Tunisia, told DW. "Little by little, I became sure he was advancing toward a model like Ben Ali's."

When Saied first took power last summer, polling suggested that the majority of locals thought what he was doing was right and necessary. But according to local market research firm, Insights TN, that has changed now. In August 2021, 49.8% supported his course, surveys found. By this February, only 23.2% did.

Could the international community step in?

Pressure is also coming from outside the country. Nations that support Tunisia with military and economic aid were careful when Saied first took over last year.

"The US has studiously avoided calling his coup a 'coup' since it would legally trigger the suspension of US financial aid to Tunisia," Tunisian political analyst Seifeddine Ferjani explained in an article for US-based organization, Democracy for the Arab World Now. "Many Western democracies have shown a remarkable amount of passivity about Saied's systematic tear down of Tunisia's democracy," he complained.

There's been "dithering," Tunisia expert Marks said, but that too has been changing recently, with statements from US and EU diplomats and politicians calling for Saied to ensure reforms were inclusive and democratic.

If Saied is forced to listen to these calls, it will be because of the desperate state of the Tunisian economy.

Even before Saied's power grab, Tunisia had been dealing with a stagnating economy, a situation made worse by the COVID-19 pandemic. Now prices for fuel and basic foods are rising further thanks to the war in Ukraine.

Currently the country's public debt is almost equal to all national income. To avoid bankruptcy, Tunisia has been in talks with the International Monetary Fund, or IMF, about a third multi-billion-dollar rescue package. A deal is expected in the middle of this year. 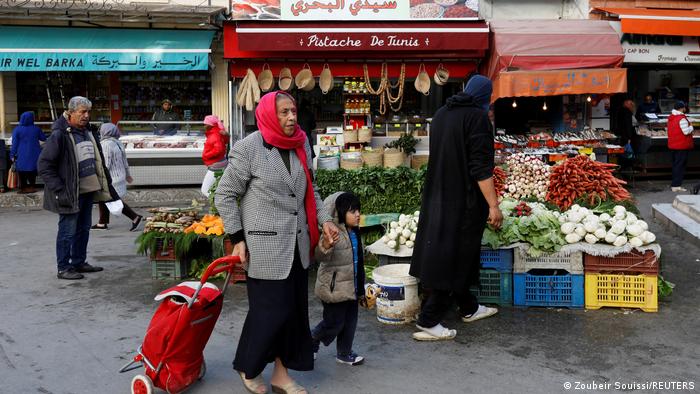 But financial help might also end up contingent on Saied's behavior.

"If Saied continues to reject an inclusive political process, Europe and Tunisia's other external partners will face a choice about whether to withhold assistance or oppose an IMF agreement," Anthony Dworkin, a senior policy fellow at the European Council on Foreign Relations, or ECFR, wrote earlier this month.

For Meddeb, it won't be just one thing that brings Tunisia back towards democracy, it will be a combination. "The economic factors won't bring about change unless there is a united and strong opposition that can really convince people it can address economic challenges," Meddeb concluded.

"By far, the most important factor is going to be economic," Marks confirmed. During past protests, including those that pushed dictator Ben Ali out of power, Tunisians called for freedom and dignity, she noted. "What dignity meant to a lot of people was being able to put food on the table and provide a decent life for their families. So the economy has always been a central concern."

President Saied does not have much of a plan for the economy though, Marks added. So the Tunisian opposition needs to unite and then formulate one.

"One of the key questions for me is whether a critical mass of Tunisians recognize that [Saied] is effectively hopeless on the economy and then rise up, before he manages to fully consolidate his dictatorship," Marks said. "There's a huge question of timing here. But sadly I don't think the prognosis is looking very positive."

Among ordinary people in Tunis, the economic crisis and coronavirus pandemic have fueled poverty and discontent. With the recent political turmoil in Tunisia — many fear their livelihoods may take an even harder hit.

Thousands of Tunisians have demonstrated in the capital after President Kais Saied granted himself new judicial powers in a decree. Saied can now unilaterally fire and block appointments of judges.