WHO study: Without action, Ebola will spread further

Ebola infections will grow without an intensified response, the World Health Organization warns. A report by the UN health agency predicts tens of thousands of cases by the end of the year. 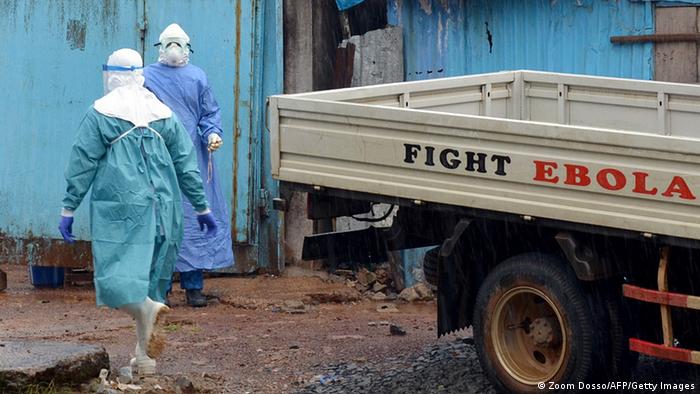 On Tuesday, the World Health Organization warned that the Ebola epidemic, which has so far killed more than 2,800 of the 5,700 people diagnosed, could drag on for years. A WHO study, carried out with Imperial College London, forecasts that by November 2, the cumulative number of confirmed and probable cases could reach about 6,000 in Guinea, 10,000 in Liberia and 5,000 in Sierra Leone unless significant action is taken. 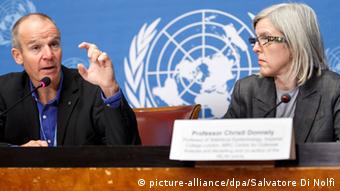 "We've rather modestly only extended the projections to November 2, but if you go to ... January 2, you're into hundreds of thousands," Christopher Dye, the head of strategy at the WHO and a co-author of the study, said on Tuesday. The outbreak might simply "rumble on as it has for the last few months for the next few years," Dye said, stressing that "the fear is that Ebola will become more or less a permanent feature of the human population."

The authors of the study, published on Tuesday in the New England Journal of Medicine, suggest that the real fatality rate has exceeded the widely estimated level of around 50 percent. With only cases of deaths and complete recovery taken into account, the real fatality rate stands at about 71 percent, the study found. The virus transmits through contact with bodily fluids.

"We are seeing exponential growth and we need to act now," Dye said.

Liberia, the hardest-hit nation, has seen 3,000 diagnoses and almost 1,600 deaths, with health workers turning people away from treatment units because of a chronic shortage of beds and staff. The country has about 150 foreign specialized medical workers on the ground and needs at least 600. The government in Monrovia aims to increase its 400 available Ebola beds to 2,000 within weeks. A US military mission is deploying 3,000 troops to provide the country with training and logistics.

Antonio Vigilante, the UN deputy special representative for recovery and governance in Liberia, has likened the struggle to "trying to remedy an earthquake when it is happening."

In Sierra Leone, President Ernest Bai Koroma said authorities have begun considering another shutdown after a three-day lock-in during which teams visited 1 million households to distribute information and check for sick people. The country has seen 1,800 diagnoses and nearly 600 deaths.

On Tuesday, Koroma said the lockdown, which ended early Monday, had left him "mainly satisfied." He added that health teams had identified many people sickened with Ebola - which causes severe muscle pain, vomiting, diarrhea and, in many cases, unstoppable internal and external bleeding - and found several bodies, but gave no numbers.

EU health ministers met Monday in Milan to work on the bloc's response to the outbreak.

Opinion: The German call for volunteers to help fight Ebola is embarrassing

If you are in the army you are under orders. But members of the German armed forces, the Bundeswehr, have now been asked to volunteer to help fight Ebola. It's embarrassing, says DW’s Ludger Schadomsky. (23.09.2014)