Who profits from the anger?

The protests against the anti-Muslim film "Innocence of Muslims" are an expression of genuinely hurt religious feelings. But they are also the result of radical ideologists who are following their own aims. 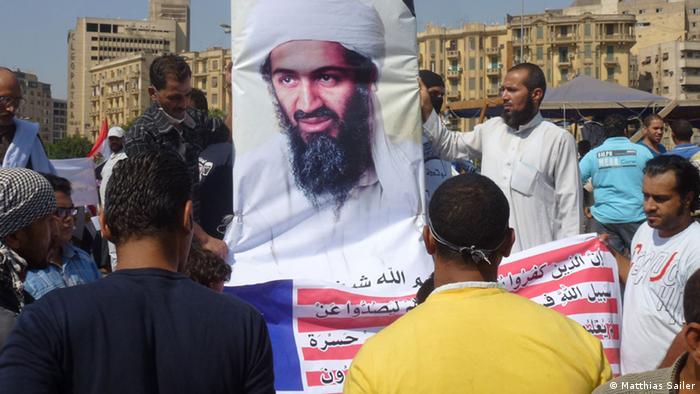 Muslims have been out on the streets from Tunisia to Yemen, defending the honor of their religion and the Prophet Muhammad, as they protest against the internet film "Innocence of Muslims."

"The whole world must recognize the anger in your faces, your fists and your voices," Sheikh Hassan Nasrallah told a demonstration of his organization Hezbollah on Monday in the Shiite dominated districts of Beirut. "As long as the blood flows in our veins, we will refuse to take the insults against our prophet in silence."

Hezbollah fights for its reputation 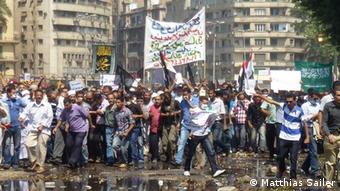 Nasrallah has not spoken in public for some time. He's said almost nothing about the conflict in neighboring Syria. Hezbollah has preferred to support the Assad regime which had given it backing for so many years: for months there have been rumors about Hezbollah fighters active in Syria.

Hezbollah's solidarity with Assad has cost it sympathy, and the possibility that Assad will be overthrown is an existential threat.

According to Lurdes Vidal, Islam expert at the Instituto Europeo del Mediterraneo in Barcelona, the film gives Nasrallah the chance of positioning himself as a defender of Islam and a pioneer in the fight against the USA. It's a way of making up lost territory, she says: "He intended his appearance to win him new supporters, since Hezbollah is not just in a difficult position in the region, it also has considerable internal problems."

As in Lebanon, other groups in the Muslim world are exploiting the anger over the film - from the Maghreb to the Arabian peninsula, it's a welcome invitation to display their power.

The pan-Arab newspaper Al Hayat writes, "The Salafists want to use their take-over of the public space in the countries of the Arab Spring to show that they are the driving force on the streets. They are challenging those elements which present themselves as mature and well-organized Muslim alternatives, but which have not yet built up their power adequately."

The extremists all have similar motives, although the context in which they work may be very different. In Libya, for example, extremist groups with links to al Qaeda are trying to gain a foothold in a country in which the newly elected government has yet to confirm its power throughout the land. Extremists exploited this weakness in August when they destroyed the graves of Sufi saints which they saw as un-Islamic.

According to the Islam expert Reinhard Schulze, based in the Swiss city of Berne, they are now trying to exploit the anger about the film for their own purposes.

"One might gain the impression that the unhappiness about the film has given the extremists who are responsible for the attack a means to interpret their action so that they can declare their terrorist attack to be an outbreak of popular anger," he told DW. 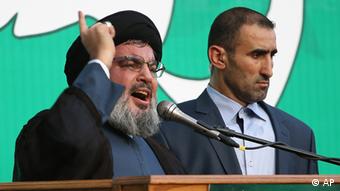 Nasrallah told his supporters not to stop their protests

But most Libyans distance themselves from those who destroy graves as well as from terrorists - just like the Egyptians, the vast majority do not support Salafist aims.

Of course there are some Egyptians who sympathize with the radicals, says political scientist Gamal Soltan of the American University of Cairo: "There's a part of the public which is ready to be manipulated because it's very sensitive about these religious issues. And on the other hand there were agitators who were ready to use the opportunity to advance their case."

Soltan sees the demonstrations as part of a wider conflict: "The Salafists are competing for the same ideology with the Muslim Brothers. That's why they're rejecting all attempts to develop national consensus. Whether it's economic hardship or the anti-Islam video, you will find someone who is ready to use it to further delegitimize the government and to advance his own case."

In Gaza too, the ruling Islamist Hamas is taking advantage of the situation. Vidal notes that its call to defend Islam comes just as it is suffering from a series of political setbacks. It has not been able to stop Israeli settlement-building in the West Bank and it fell back behind its competitors in Fatah after Fatah won respect for its application for Palestinian observer status at the UN.

Vidal says that Hamas too has lost support as a result of its delay in cutting its relations with the Assad regime: "That's why it's presenting itself as a defender of Islam. At the same time, it demonizes the USA. That's how it's tightening its image which had become somewhat unclear."

Sudan and its debts 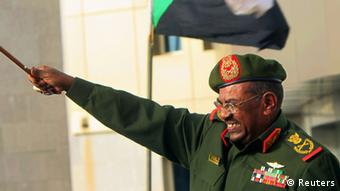 Al-Bashir wants to divert attention from the cuts

Different conditions apply in Sudan. According to Schulze, the government there was at least partly responsible for the violence through the activity of friendly media: "Here there really was a guiding hand. I can't imagine that the Sudanese people would have demonstrated like this if there hadn't been this direction."

The protests certainly suit the government of President Omar Hassan al-Bashir. Following the independence of South Sudan a year ago, Sudan lost much of its oil revenues, since most of the oil was in the South. The government is trying to compensate with a strict program of cuts, against which citizens have been demonstrating for months.

Schulze argues that the protests against the film were a welcome opportunity for the government to steer the people's discontent in another direction. But that won't make the government's problems any easier.

"On the one hand the government has to ensure that the austerity program is carried out and that the country reduces its debts somehow," says Schulze. "On the other hand it wants to avoid any kind of Arab Spring in Sudan."

Protests against an anti-Islam film originating in the US are spreading across Muslim countries. DW takes a closer look at what's behind the violent demonstrations. (19.09.2012)

Caricatures set off concern in France