WHO: Environment causes one in four deaths | Environment | All topics from climate change to conservation | DW | 15.03.2016

WHO: Environment causes one in four deaths

Environmental factors like air, water and soil pollution cause one in four deaths worldwide, the WHO says. Environmentally linked deaths are most prevalent in Southeast Asia. 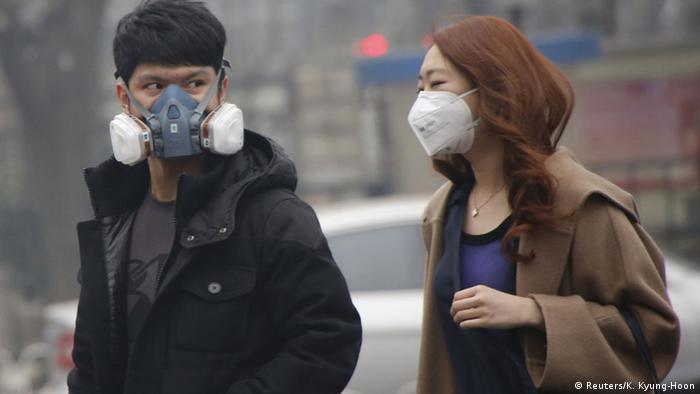 The World Health Organization (WHO) is calling for measures to be taken to improve the environmental conditions that people live and work in after a report revealed that 12.6 million people died in 2012 as a result of environmental factors.

Air, water and soil pollution along with chemical exposures, climate change and ultraviolet light were cited as contributing to more than 100 diseases and injuries, according to the report released by the WHO on Tuesday (15.03.2016).

Margaret Chan, WHO director-general, said a healthy environment was essential for a healthy population. “If countries do not take actions to make environments where people live and work healthy, millions will continue to become ill and die too young,” she said.

Low and middle income countries in Southeast Asia are the hardest hit by environmental factors with 3.8 million deaths annually and the Western Pacific region following close behind.

Diseases resulting from air pollution accounted for as many as 8.2 million of the deaths, according to the report, while conditions such as stroke, heart disease and cancer accounted for two thirds of the deaths and could be attributed to unhealthy environments.

Those most affected are children under five and adults between the ages of 50 and 75, which accounted for almost half of all the deaths attributable to environmental factors.

However, the second edition of a report a global assessment of the burden of disease from environmental risks, originally released in 2006, said that deaths from diseases such as diarrhea and malaria had declined.

The report called on countries to increased use of clean technologies and fuels for cooking as well as better access to safe water and sanitation.

“There's an urgent need for investment in strategies to reduce environmental risks in our cities, homes and workplaces,” said Maria Neira, WHO director of the department of public health, environmental and social determinants of health. “Such investments can significantly reduce the rising worldwide burden of cardiovascular and respiratory diseases, injuries and cancers and lead to immediate savings in healthcare costs.”

The US Environmental Protection Agency (EPA) has determined an insecticide made by the German company Bayer harms aquatic life. The EPA ordered Bayer to halt production of the chemical used on more than 170 crops. (01.03.2016)

'Need for Meat' at the Berlinale

Meat: bad for the environment, yet oh-so-tasty. Could you be addicted? A Dutch director discusses her personal exploration of the topic of meat in her film, playing this week at the Berlinale. (16.02.2016)

China is running out of breath