Who can save Poland′s oldest forest from environmental disaster? | Environment | All topics from climate change to conservation | DW | 21.03.2016

Polish ecological organizations are up in arms over plans to reintroduce large-scale logging in the protected Bialowieza forest in the east of the country, in response to a massive spruce bark beetle infestation there. 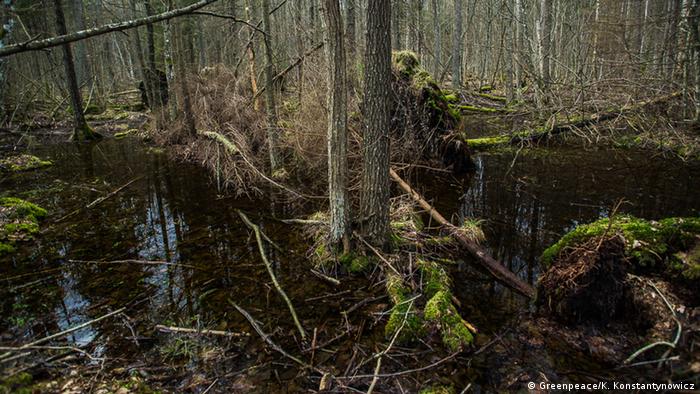 The sound of logging is back in the ancient Bialowieza forest.

In 2011, strict quotas on the amount of harvested timber were introduced by the former Polish government in response to a large-scale campaign by Polish and international ecologists. Before, in much of the forest, towering oak, spruce, larch and pine trees used to be commercially exploited.

Until 2021, foresters were set a limit of 63,000 cubic meters of timber. But due to an unprecedented invasion of the spruce bark beetle, foresters have dusted off their chainsaws to get rid of the pest. The limit has been all but exhausted in half the allotted time.

According to Dariusz Skirko, the chief forester of the Bialowieza forest, removing infested trees is his responsibility for the sake of the environment and for the sake of visitors who might be endangered by falling dead trees. 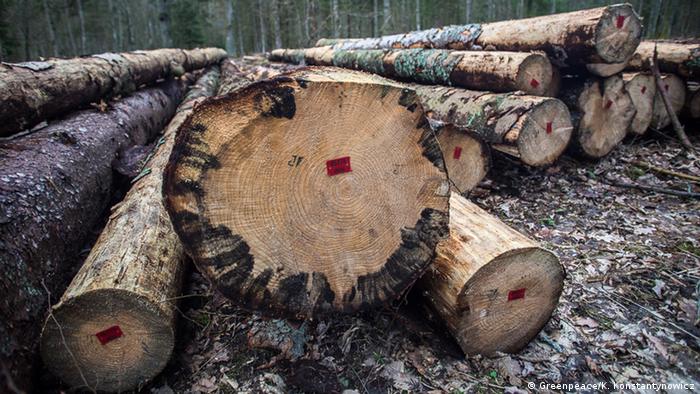 Foresters have documented the extent of the damage caused by the outbreak. They have produced a disturbing online video which shows majestic conifers standing withered, blackened and overgrown with fungi. "We are facing a disaster," Skirko told DW.

"We are stepping up what we call active protection measures. One tree attacked by the beetle can lead to the infestation of thirty other trees within just one year."

But to green activists, "active protection" is a misnomer. They are fiercely opposing plans by the Polish environment ministry to contain the outbreak by harvesting up to five times more timber in Bialowieza than before. During one event, organised by Greenpeace, an enormous Valentine's Day card for Bialowieza was created right in the centre of Warsaw.

Greenpeace Poland director Robert Cyglicki told DW he is appalled at the approach of the Polish environment minister, Jan Szyszko. "What really worries us is that, in his statement, he explained to the public that there is about 600 million Polish zlotys [worth of deadwood] left rotting, which shows that he doesn't see Bialowieza forest as a natural forest, as a place that deserves protection," he says.

"We are afraid that his decision will have a big impact on the forest." 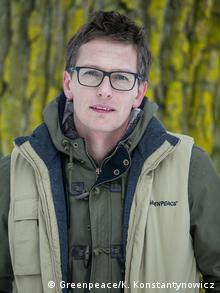 But a rival demonstration was held in Warsaw earlier this year by foresters and representatives of local communities. They claimed that the logging limits imposed in 2011 are in fact partly responsible for the bark beetle outbreak, because the pest breeds on the uncleared deadwood.

One of the marchers, former senator Wlodzimierz Cimoszewicz, told the rally: "You can see that nature is coping with the situation, as long as you create enough clearings ready for new seeds to take root. New generations of trees will grow in this place." There are those, however, who say Cimoszewicz's motives may be less than selfless. He is known to have interests in the local timber industry.

In the village of Bialowieza, which lies in the heart of the forest, emotions are running high. One villager in his sixties explained he was upset by what he called endless waves of green campaigners who pop in for a day. "Calls for a continued logging ban are undermining the livelihood of their communities, which have relied on forestry for centuries," he said.

Under pressure from the opposing lobby groups, Minister Szyszko last week announced what he believes is a compromise decision. "We have decided to exempt one third of the forest outside the national park from man's intervention."

"In the rest, active measures will be taken to quickly eliminate the destruction by the bark beetle," Szyszko stated. "At the same time, we will be taking care to retain natural habitats wherever possible," he said at a press conference in Warsaw. 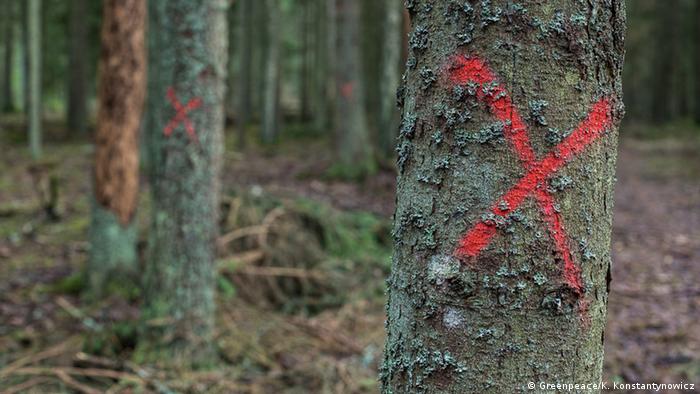 But at Greenpeace Poland, Robert Cyglicki is worried that Bialowieza forest is in for too much logging. He has had a major run-in with minister Szyszko before. Some time ago, he was among those who managed to persuade him to reverse a controversial decision to allow a busy international road to cut across a marshland conservation area in northeastern Poland.

Cyglicki says that the Bialowieza forest is simply too precious for politicians to tamper with. "Scientists' findings show us that the unprecedented bark beetle outbreaks are driven by large-scale factors like climate change, landscape, local droughts or light winters," he says.

"So we cannot take any serious actions against these outbreaks by technical measures. We have to allow nature to protect itself. We are talking about a really unique environment, a unique ecosystem, home to wolves, the lynx and the European bison, which you cannot find in any other places in Europe."

The two visions of how to deal with the bark beetle epidemic seem impossible to reconcile. But those on the green side of things are hoping that, just like in the case of the scrapped marshland expressway project, a common sense solution will prevail. They hope that the Polish environment ministry will reconsider its plans to allow timber harvesting in two thirds of the forest.

Environmental certification of wood under the Forest Stewardship Council is not only a means of ensuring shoppers can access ethically sourced goods - it might also prevent the spread of disease. (15.03.2016)

Indonesia is the scene of massive deforestation – most of it illegal slash and burn. (05.12.2015)