When technology takes over your life, turn your machine into the message | Science| In-depth reporting on science and technology | DW | 19.09.2014

When technology takes over your life, turn your machine into the message

If you worry that digital devices control your life, art may have an answer. Device Art, a melange of cool design and concept art, featured at this year's Ars Electronica digital art festival in Linz. 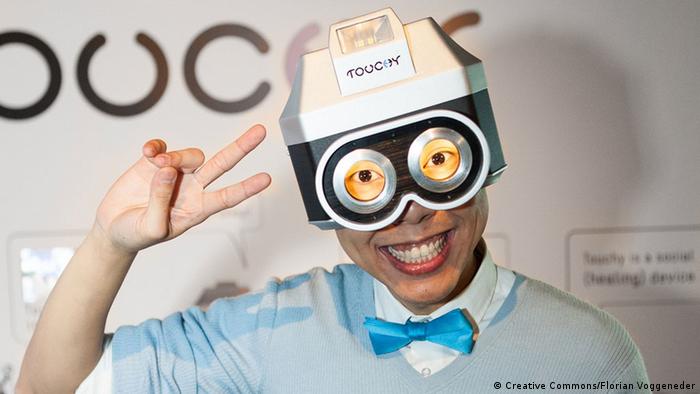 Novmichi Tosa sits on a stage which is decorated to resemble a Japanese Tea Room.

He's playing the tune Greensleeves on a plastic device he calls an otamatone.

The instrument is shaped like a musical note and the familiar tune emerges as an unfamiliar whining sound from a moving mouth.

Welcome to the sometimes weird but mostly challenging world of Device Art.

As with the otamatone itself, the movement began in Japan.

"It was a Japanese movement," says Scott Hessels, a Hong Kong-based artist and film maker, "although there was a concurrent movement in Croatia, and there was a sort of club of us at UCLA (University of California Los Angeles)."

He says three of the artists exhibiting at Ars Electronica studied at UCLA which "sort of embraced the system as another way of using a message."

Ars Electronica describes the content of device art as "the device itself" - a twist on Marshall McLuhan's often quoted observation "the medium is the message."

In Device Art the device is the message, and form, appearance and function are inseparable. 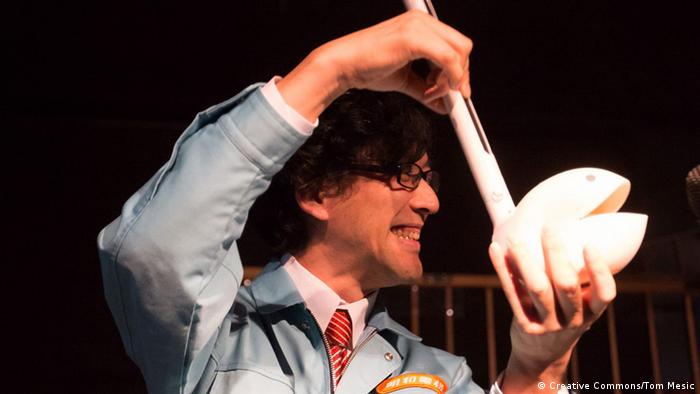 Another defining characteristic is its relationship with ancient Japanese traditions - esteeming playfulness and cultivating the things we use in everyday life.

"The experiences in virtual reality technologies are not really fully expressed in the formal way on paper, so I have been focusing on demonstrating the virtual technologies," says Hiroo Iwata, the man often credited as the founder of Device Art.

An engineer and virtual reality researcher, Hiroo Iwata says an art form is "the best way to demonstrate to the public…so that's why I manifested Device Art."

At Ars Electronica, he demonstrates his "Food Simulator."

It takes taste simulation into new sensations, with a pressure sensor in the user's mouth simulating resistance to chewing.

"Taste is very difficult to simulate in the field of virtual reality," he says, "but I have been challenging the reality."

From the alleys of Shanghai - Device Art analogue style

The Device Art artwork with the least electronics - in fact, none at all - at Ars Electronica is an old fashioned bicycle with an equally antiquated screen carousel rotating above the handlebars.

It's called "Sustainable Cinema No. 2" and was created by Scott Hessels.

"The idea is that if you go far enough back in cinema history, celluloid was cattle bones, wood pulp and powdered minerals, and even further back it was animal skins and silk screens," says Hessels.

He says cinema was taken over by the industrial age and by the digital age, and that his machines are a kind of "what if" - what if it cinema continued along the path of its origins? 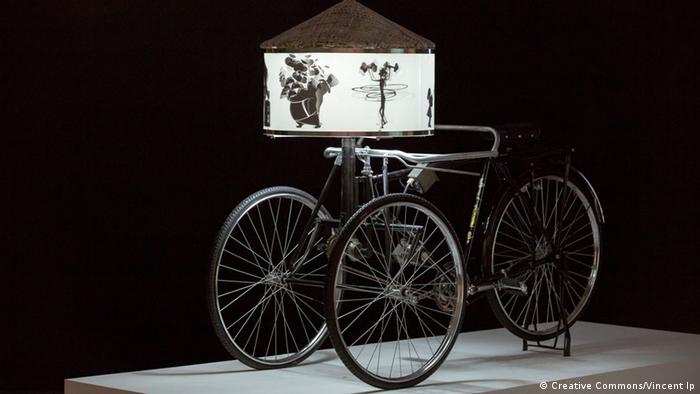 Hessels describes his Lenticular Bicycle as a kind of fake history machine.

"As if two old men were talking saying, Oh yeah, I remember when movies were powered by bicycles."

And how does he feel about his being the only analogue art in a room buzzing with electronics?

"I kind of love that embrace," he laughs. "My father was a carpenter and we made this in a back alley in Shanghai, using local metal workers, and it was exactly the way you would envision. It was three legged dogs and chicken bones and old Chinese men pounding on metal pieces. And we had a blast."

Virtual reality with a human touch

Other device art objects at Ars Electronica include a robot that performs street begging.

Built from cheap recycled computer parts, with a voice that asks for donations and robotic hands to accept them, it's proving more successful than a human beggar at attracting alms.

"I always questioned the idea of virtual being separate. That's almost like separating the spirit from the body," says Victoria Vesna, a professor at UCLA's Department of Design and Media Arts, where she leads the centre for art science.

Vesna says "the ultimate goal and essence of device art is that it is physical."

And nearby one of her students is demonstrating just that.

"Hello my name is Touchy. I am a human camera. When there is nobody touching me, I cannot see anything, so now I am blind," says Eric Suiss from the midst of a small circle of fans.

The Hong Kong-based artist wears a helmet resembling an early version of a virtual reality headset. 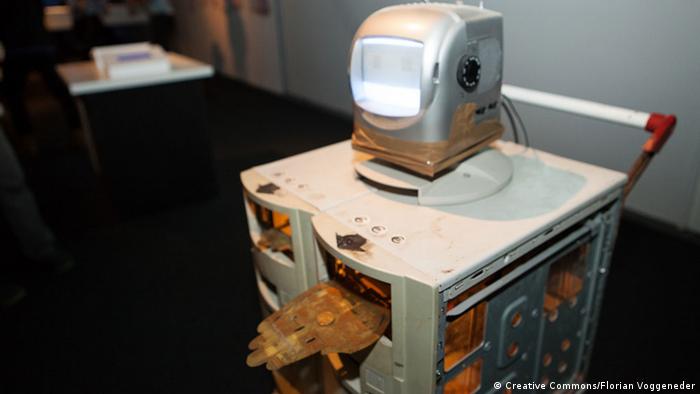 The Beggar Robot by Saso Sedlaček

Someone reaches out and clasps his hand. There's the whirr and a click of a camera lens shutter, and suddenly his eyes are visible and brightly illuminated.

"When people touch me my shutters open, then I can see…no touch and I am blind, and if you touch me for 10 seconds, I will take a photo for you," says the artist, pointing to a screen on the back of his helmet.

"I am an artist. I love designing interactivity. So I was thinking…if someone is blind and cannot see and someone touches him and he can see - it's a very poetic interaction."

Machines, the message - and humor

"Device Art is definitely a rebellion of form, taking everyday objects and inverting them to tell you something different," says Hessels.

Deliberately misquoting Marshall McLuhan he says "the machine is the message here."

"I've noticed from my younger students, the new generation," says Vesna, "they're into records, they love tape, they want to go back to 35mm film…and I'm thinking, no problem! I think it's great, definitely, so it's a good thing."

Some devices, like the otomatone with its weirdly whining music and moving mouth are sold commercially.

And Touchy, the human camera, may one day also be available to buy.

"Of course, eventually I want to open the possibility to sell it on the market," says the young artist.

He believes Touchy is not his to use exclusively. And if the crowd reaching for his hand, hoping to restore his sight, is any guide, he could be wearing the answer to Google Glass: a device that demands human touch while all other new devices strive to replace it.

Visual communications are central to nearly every area of life and business nowadays. The rapid technology changes driving the imaging sector can be seen at the Photokina 2014 trade fair in Cologne, September 16 - 21. (16.09.2014)

The EU has said libraries may digitize their own collections without permission from copyright holders. That makes more books available to more people - but irks copyright advocates and publishers. (12.09.2014)