Brazilian President Jair Bolsonaro believes COVID is a joke - but entertainer and YouTuber Felipe Neto is not laughing. He's taking the South American leader to task online, resulting in many followers and haters alike. 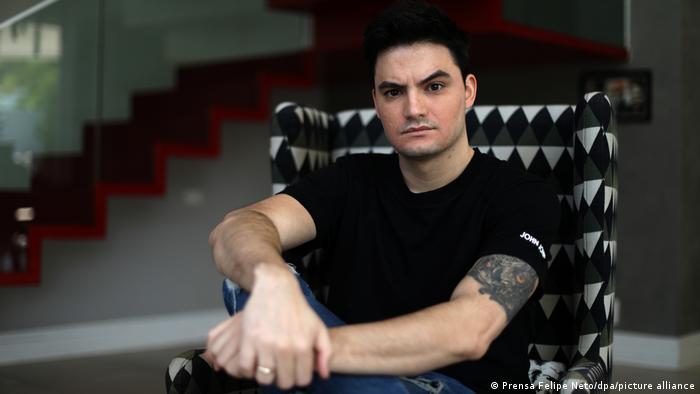 He is universally recognized in Brazil for dying his hair in neon colors as well as for his engaging reviews of video games on YouTube. From hours of content relating to Minecraft to videos about the cutest animals or other memes, Felipe Neto is hardly chasing after a career in journalism or broadcasting. But the 33-year-old is far more than just another vlogger or a simple influencer churning out content:

With 17 million subscribers to his YouTube channel in Brazil alone and a worldwide following with over 41 million people, Neto certainly does enjoy a great deal of popularity not only among gamers but also among those in his country who — much like he — disagree with Brazilian President Jair Bolsanaro's populist policies and his lackadaisical COVID response.

Indeed, he is rather passionate about taking Bolsanaro to task for his handling of the COVID crisis. By the end of May 2021, the pandemic had claimed more than 454,000 lives in Brazil — something that Neto referred to publicly as an act of "genocide."

Fighting 'fascism' as a social imperative

As much as he is well versed in attracting fans, Felipe Neto also draws critics who are happy to frequently drive all the way to his doorstep, threatening to harm or even kill him. His critics also go above and beyond online to try to discredit or silence Neto, accusing him of pedophilia among other things — chiefly because of his support of the LGBTQ+ community.

"When they tried to tell people that I was a pedophile, that I was involved in criminal behavior, I used the opportunity to talk to my audience, look them in the eye and show them the truth, and prove them the truth they can convince other people online," Neto recalled of his experience at the time. The campaign against him even involved a fake video in which Neto was purported as saying that he consumed children "like candy."

Despite being proven to be a fake video, the hate campaign against Neto has also cost him many followers as well as sponsorship deals, highlighting how delicate and thin the balance on which influencers have to tread truly is.

Still, he remains undeterred: "When we are facing fascism and fascists, everyone who decides to stay silent is an accomplice of this fascist regime," he told DW.

"It's just very shameful in my point of view that artists and influencers are deciding to stay silent when we have this regime that is taking over Brazil. … I stand by my opinion and I believe you cannot stay silent when you are facing someone like Jair Bolsonaro."

A divisive character in Brazil and even beyond, Neto's increasing activism in politics in recent years also become a matter of legal discourse. He has even been issued a summons to court for defaming President Bolsonaro by equating his COVID policy to genocide earlier this year.

That case has later been dismissed by a judge on the mere technicality that it had been filed by Bolsonaro's son, Carlos — and not by the public prosecutor, the military responsible nor the ministry of justice.

Neto took the ruling in his stride, dedicating this "victory" to Carlos Bolsonaro in a tweet, "as it would not have been possible without him."

And then he took things even further: Refusing to be muzzled and reacting to the many threats that he and other like him have been facing ever since Bolsonaro became President in 2019, Neto has launched a legal aid platform earlier in May 2021 to fight any attacks on freedom of speech in this country: Anyone who gets into legal trouble for criticizing the president or any other public authority will receive free legal support from his initiative.

Within 24 hours of launching the campaign, Neto had already received over 100 request for help.

A rebel with a challenging cause

Over time, however, Felipe Neto's style has changed. He is clearly aware of the impact that comes with his reach. His voice has become more grounded, his style more collected, and while he is still also in the business of reviewing games, his hair no longer reflects every imaginable shade that's under the rainbow but is a solid black that complements that composure of his gaze.

Perhaps he might even be hiding some gray hairs that the activism of recent years might have cost him.

While still cracking a few jokes and drawing lighthearted comparisons, Neto said in a July 2020 video published by the New York Times that "(w)hen the clown needs to speak seriously, you know that the circus probably is on fire."

With nearly one of every seven COVID-related deaths in the world is taking place in Brazil, Neto is well aware of the fact that this fire might require more than a YouTube channel and Twitter followers to be extinguished: "When a Youtuber enjoys any level of influence over politics, you know that it's a sign of the impoverishment of the country's political culture," he said.

And so he continues to fight his cause, on and offline. According to a qualitative poll by Brazilian research institute Quaest, Neto's reach on digital media is only second to the President's amid great division in Brazil.

And looking beyond his country, he is also one of the top 100 Most Influential People of 2020, according to Time magazine. Investigative journalist Glenn Greenwald said that Neto was on an "amazing trajectory" recalibrating his "huge empire" built on "standard-fare YouTube frivolity" to become a "leading anti-Bolsonaro voice." That same year, however, Bolsonaro was also bestowed the same title by Time.

That level of influence also comes at a personal cost: Neto has had to send his mother abroad to make sure that she stays protected from attacks and threats. And while he feels that Brazil's existing laws do little to protect people like him from censorship, Neto does not want Congress to rush any changes through legislation:

"The laws are very old. They were not created in a digital world. So [the legislators] didn't think about what would happen when we had the internet and everyone would be able to send threats. At the same time I don't think that the solution is to rush things through the congress and just write whatever … to protect people.

"We need to take our time to talk with the specialists. We need to stay calm. When we rush things, we end up with bad laws. I don't think, that’s a solution to any one," Neto told DW.

As Brazil appears set on breaking the benchmark of having more than half a million COVID deaths in the summer of 2021, Felipe Neto is aware of the growing responsibility he holds — while he remains resolute that humor will always be the cornerstone and the raison d'etre of his business:

"I take my responsibility very seriously. But at the same time, I'm a family entertainer. I do silly jokes, I create silly content, and I'm not ashamed of it. Especially when we are facing bad times like now. People need to laugh and just feel silly for a few moments," Neto explained.

"But also remember that if you are followed by a million people, then a million people can be misinformed if you tell a lie or say something just from the top of your head without researching.

"That's basically the responsibility that I take very seriously."

On June 15, Felipe Nero will speak at the DW Global Media Forum 2021. Register now for your free digital pass to participate in the conference and watch the panel discussion "Social media inventory: Connecting people, dividing societies?"