With a laser-driven microphone, scientists in Bonn have found that flowers whimper when a leaf is cut and cucumbers squeal when they get sick. The discovery will benefit farming and agriculture, they say. 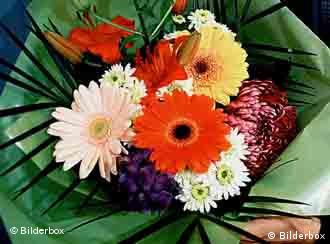 They sure are pretty, but how do you know they didn't cry when they were cut?

The next time you casually pluck a flower or break a leaf from a tree, you might stop to consider the pain you’ve caused the plant.

In fact, if you listen hard enough, you might even hear the poor plant whimpering in pain.

Well, not with the naked ear but maybe with a device for acoustically measuring the stress level of plants developed by scientists at the Institute for Applied Physics at the University of Bonn.

Scientists there have discovered that depending on how they’re "feeling", plants emit gases that can be recorded with a specially devised laser-powered microphone.

Frank Kühnemann of the Institute for Applied Physics in Bonn explains that when a leaf or a stem is cut off, the plant "cries out" in pain by releasing the gas ethylene over its entire surface.

Researchers at the institute then trap the ethylene in a bell jar, which is placed along with the severed part of the plant in a climate-controlled room with constant temperatures and simulated natural light.

Over a number of hours, the ethylene passes through tubes into a complex device. It bombards the ethylene molecules with specially calibrated lasers, making them vibrate. The result is a sound wave, which can be picked up over microphones.

Frank Kühnemann says, "The more a plant is subjected to stress, the louder the signal we get on our microphone."

But what can be achieved by recording the stress levels of plants?

Researchers believe that the discovery will prove valuable in helping fruit and vegetable producers develop optimal storage and transport procedures.

Scientists say that their acoustical evidence now shows that apples with their higher production of ethylene causes other plants to wilt and rot and therefore recommend fruit producers to store apples in solitary confinement.

They also believe that packing ripe fruit with unripe one explains why a substantial amount of fruit rots even in shipment despite being separated by type.

Differences in ripeness are often invisible but can be detected acoustically in the form of ethylene gas. Fruit ripeness could thus be measured prior to transport.

Wolfgang Praetorius, Managing Director of Fruchthansa, Cologne says "individual pieces of fruit could be tested directly after being harvested, before being shipped. The relative ripeness could be determined, and the fruit could be separated accordingly. Then we would know which batches to ship together and how long they’d stay fresh."

Boon to farmers too

The invention of the laser-powered microphone that can eavesdrop on the secret voices of plants could also greatly benefit farmers by working as an early-warning system to detect agricultural pests and diseases.

At the Institute for Applied Physics at the Bonn university, scientists picked up the squealing of a harmless looking cucumber with their laser-powered microphone.

Though the cause was unclear at first, they soon discovered that the cucumber had developed mildew, a condition whose symptoms had not yet become visible.

Ralph Gäbler at the Bonn University says, "we can detect an infection the day after it has set in. Farmers, looking at their plants in the field, have to wait eight or nine days until the mildew spots have visibly broken out, before they notice the problem."

Eavesdropping on the social life of plants

Apart from the obvious benefits for farming and agriculture, electronic eavesdropping has also enabled scientists to discover that plants also have something of a social life.

They warn each other about approaching danger. The "alarm signal" takes the form of a chemical message transmitted between individual plants.

Though Scientists using the acoustic-ethylene method have not succeeded in proving that plants have feelings - which may come as a disappointment to plant-lovers - the chemical voices of flora allows them to distinguish between healthy and sick plants.

Research areas, teaching and education and general information on the institute