When cultures unite: Highlights from the 2019 Campus Concert 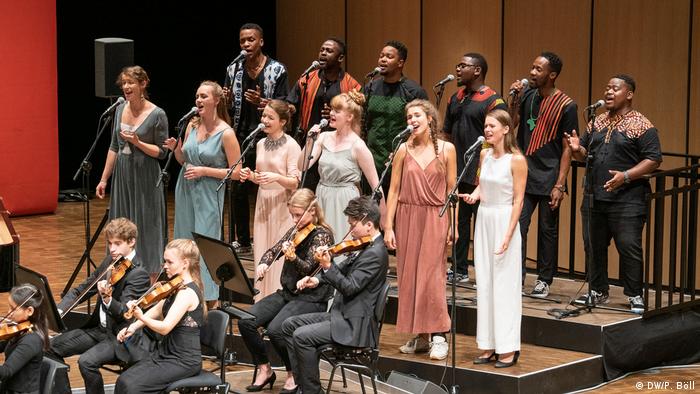 The headlines coming out of South Africa today expose the inequalities still affecting the country, despite its long road to reconciliation and its ultimate triumph over the oppressive apartheid state 25 years ago: There are mounting reports of xenophobia, misogyny and violence shaking up the country's frail democracy, challenging its stability and costing lives.

But despite these heavy setbacks, there is also a deep desire among people to overcome their differences and come together across cultural lines using creativity as a universal language.

Deutsche Welle (DW) supports an initiative that hopes to achieve just that: the Campus Project. As part of DW's partnership with the annual Beethovenfest Bonn, musicians from cultures from around the world are invited to Bonn each year to be part of a unique musical exchange program. After welcoming young people from China, Mexico, Ukraine and India in recent years, the focus in 2019 is on South Africa as the country marks a quarter of a century of democratic rule.

Music as a universal language

At the opening of the 2019 Campus Project concert, organized by the Beethovenfest and DW, South Africa's ambassador to Germany, Phumelele Stone Sizani, told concertgoers at the World Conference Center Bonn that in his country, music has always played a central role as an arbiter among the many cultures of South Africa:

"Music is part and parcel of everything we do, and it had a huge impact on my life because I also know now that music is a universal language," Sizani said, adding that those who carry music with them into the world are just as much ambassadors of South African culture as he is.

The concert opened with English composer William Walton's "Johannesburg Festival Overture for Orchestra," written in 1956. The symphonic piece incorporates a great deal of African rhythms with an extended percussion section, reflecting the various influences and tradition of mid-century South Africa. It was performed by the National Youth Orchestra of Germany, whose gifted instrumentalists, aged between 14 and 19, also accompanied all other performers of the evening, led by the charismatic Brandon Phillips, resident conductor of the Cape Town Philharmonic Orchestra. 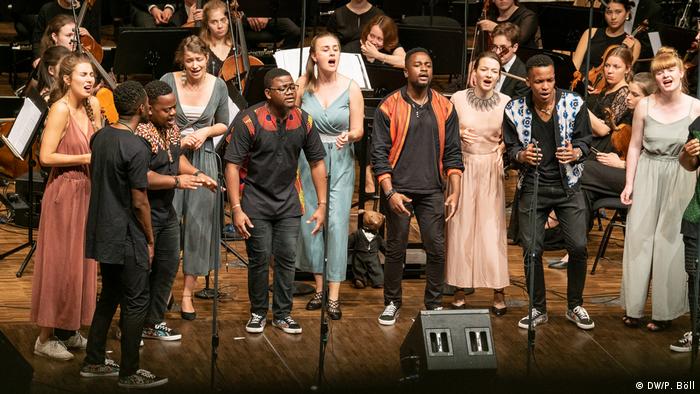 Collaboration between continents and musical traditions

Following this pulsating opening, the two headlining acts took to the stage. This year, the Campus Project brought together two a cappella groups with mighty voices — Just 6 from Johannesburg, South Africa, and Sjaella from Leipzig in eastern Germany.

The two groups are characterized by distinct approaches to vocal performance and musical traditions: Just 6 belong to the Zulu tradition of isicathamiya singing, and they blend this folkloristic a cappella style with contemporary elements from popular music, while the six ladies of Sjaella mainly perform European choral music in perfect harmony.

Yet when Sjaella and Just 6 took to the stage together, their voices seemed to melt naturally into a sonic interplay uniting the cultures, languages and musical styles of South Africa and Germany.

"Although the Sjaella women are trained in the classical tradition and Just 6 sing by ear, they simply fit together incredibly well musically," Thomas Scheider, manager of the Campus Project for the Beethovenfest, told DW in the run-up to the event. "Just 6 was mesmerized by the technical perfection of the women — and the women by the soft, silky sound of the boys singing everything by ear." 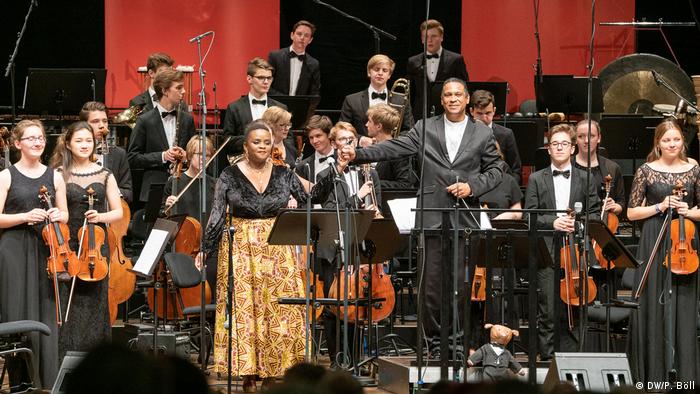 The spirit of Beethoven 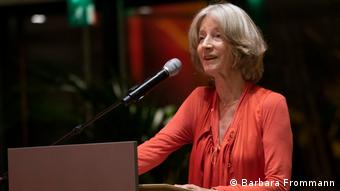 Being organized by the annual Beethovenfest, the orchestra also shared two songs written by the legendary composer who was born in Bonn. The two Beethoven pieces, composed for Johann Wolfgang von Goethe's play Egmont, were sung by German soprano Nicola Heinecker, a virtuoso in her field.

Director of the Beethovenfest Nike Wagner said that Ludwig van Beethoven's spirit provides the perfect frame to present such an international exchange of musical styles, highlighting the composer's avid faith in human unity and peaceful coexistence:

"I know that European music is part of South African culture. But I also know that this is an exceptionally multilingual society, that they love singing and that they have developed their own unique vocal styles there. So there are these two traditions in South Africa existing side by side, which can be seen as a triumph of democracy."

As part of the annual Campus Project event, DW commissions a new work of music to be premiered at the Beethovenfest. This year, South African composer Tshepo Tsotetsi was tasked with creating this unique piece of music to be performed by the National Youth Orchestra of Germany with the vocalists of Just 6 and Sjaella. 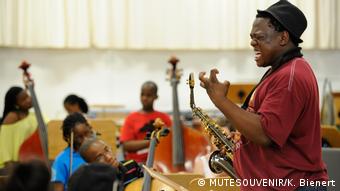 The 29-year-old composer and saxophonist told DW he'd been working on his special composition, titled "Birth of Change," for months. With the piece, Tsotetsi said that he aimed to draw attention to the "not-so-visible people in our society, the unsung heroes who actually make things operate more efficiently than we think."

"I tell the story of a baker who bakes and about how the success of his business depends on his finding new ways to do his job. Or imagine the work of a cleaner. It's not a glamorous profession. But in my life I have met cleaners who were the most sparkling personalities and had the most optimistic attitude towards life," the young composer told DW.

The third movement of the composition was a particular crowd-pleaser, with the repeated lyric "My bread is so delicious" entertaining and moving the audience in equal parts.

Tshepo Tsotetsi was notably excited ahead of the premiere at the World Conference Center in Bonn on September 12: "It's magical to see how these people from two different countries interweave their sounds with each other, while sticking to the African influence. Hearing how they jelled was the most impressive thing I've experienced in a long time," he told DW.

The audience, the organizers and the youth orchestra all seem to have shared that feeling. Echoing Tsotetsi's own impression, the word that could be heard among audience members throughout the foyer of the World Conference Center Bonn after the concert was also "magical."

The performers from the 2019 Beethovenfest Campus Project will now get to share that magic once more with an audience in Berlin on September 13.

The Beethovenfest Bonn 2019 continues until September 29.