What′s behind the uproar over alleged antisemitic event in Leipzig? | Germany | News and in-depth reporting from Berlin and beyond | DW | 06.10.2021

What's behind the uproar over alleged antisemitic event in Leipzig?

Police are investigating German musician Gil Ofarim's accusation of antisemitism at a Leipzig hotel. Activists are outraged, and the hotel in question is on the defensive. 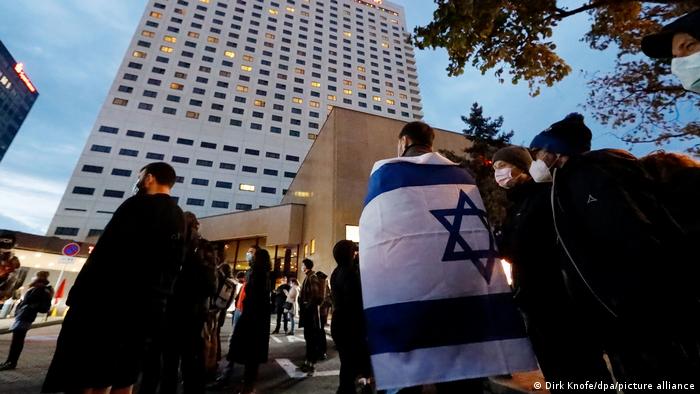 After Tuesday night's protest, the entrance to the Westin hotel in Leipzig — an upscale hotel just a few minutes by foot from the central train station in this eastern German city — is again quiet. The driveway is all but empty. Those who do approach are greeted by a large banner with the message: "Warm welcome!"

A warm welcome was anything but Gil Ofarim's experience on Monday, according to a tearful video statement he posted to Instagram from the hotel's curb. It has since been watched more than 2.7 million times.

The Munich-born musician, who is Jewish, said he was the target of antisemitism. Two hotel employees, he said in the video, told him that if he wanted to check-in, he'd have to "put away" the Star of David necklace he was wearing.

"It wasn't the first time in my life I've been confronted with xenophobia and antisemitism, but I figured it was one time too much," Ofarim told the German broadcaster Bild TV on Wednesday. "I'm glad I did what I did."

None of the bystanders spoke up for him, he added.

Hotel on the defensive

The employees Ofarim has accused have been suspended "while we fully clarify the matter," the hotel said in a statement, which called the report "unacceptable" and cause for great alarm.

Ofarim's supporters say the hotel's response has been inadequate. An effort to show solidarity with the few hundred protesters who converged on the hotel on Tuesday night was met with derision, after photos circulated on social media showing what appeared to be staff in front of the hotel holding a banner adorned in Israeli flags and the Islamic crescent moon and star.

Josef Schuster, the president of the Central Council of Jews in Germany, was not impressed. "Following antisemitic hostility against a Jew in Germany, all the hotel can do is print a banner with the Israeli flag and symbols of Islam," he told Germany's DPA news agency.

Ofarim told Bild TV that the hotel had reached out to his management to discuss the incident, but he said this fell short of the apology that he is looking for.

The court of social media

A number of investigations are now underway, according to Leipzig police. Ofarim has not pressed charges, though a third party did file an online complaint for incitement.

"Now it's about waiting to see what the investigations lead to and what actually happened on that day," Leipzig police spokesperson Olaf Hoppe said.

Patience may be hard to come by. As is often the case when allegations of racism, xenophobia, and other forms of hate and discrimination make headlines, social media outrage has been piling up to decry what Ofarim said he experienced in the Westin lobby.

Leipzig nimmt Platz, an anti-fascist group that organized the protest, made its message on Instagram clear: "Don't give fascism one inch! Don't give antisemitism one inch!"

In a tweet from the protest, the head of Leipzig's Social Democrats, Irena Rudolph-Kokot, wrote: "We aren't here as parties or coalitions, but as citizens of this city who are truly shocked."

Several German officials have also expressed confidence in Ofarim's allegations, even as investigators say they have yet to find more evidence to determine what happened on Monday night.

"This is an incredible case of antisemitism and a violation of the [equal treatment law]," the Federal Anti-Discrimination Agency said in a tweet that included Ofarim's video.

The accused enjoy the presumption of innocence in Germany, as well as the right to file their own criminal complaints. While Ofarim has said he is still deciding whether to press charges, one of the suspended hotel workers already has.

His report, for defamation and endangerment, describes a situation "very much different from the artists' omissions," said police spokesperson Hoppe.