What you need to know about Ramadan

Millions of Muslims across the world have begun observing Islam's holy month of Ramadan. But what is it about? DW examines the religious observance and what it means for the faithful.

Ramadan is regarded as Islam's holiest month in the Muslim lunar calendar. The month generally lasts between 29 and 30 days, and represents a period of spiritual discipline and purification.

It is observed by most of the world's roughly 1.6 billion Muslims through fasting, prayer, alms-offering and recitations of the Quran, Islam's holy book.

Observing Ramadan is considered the one of the five pillars of Islam, which include the declaration of faith, charity and pilgrimage to Mecca, the religion's holiest site.

According to the second chapter of the Quran, "The month of Ramadan in which was revealed the Qur'an, a guidance for mankind, and clear proofs of the guidance, and the Criterion (of right and wrong)."

Hanukkah, Christmas and Ramadan, celebrated together

For 22 years, and against all odds, one cultural center in Israel has organized a festival celebrating three holidays of three religions all together. "It gives hope to see that people can coexist," one participant says.

When does Ramadan begin and end?

Each year, Ramadan begins and ends at a different time. The starting date begins with the sighting of the new moon.

However, even the sighting of the moon is determined differently across the world. For example, Saudi Arabia and 33 other countries declared the beginning of Ramadan on Saturday. However, Pakistan, India and Bangladesh announced the month of fasting will start on Sunday.

According to the Abu Dhabi-based International Astronomical Center, the differences in time arise from the methods in which the new moon is observed. Some places use telescopes to determine the beginning of the new moon, while others rely on the naked eye.

The end of Ramadan is determined in a similar manner, with the sighting of the next new moon. The three-day celebration of Eid al-Fitr, or the festival of breaking the fast, marks the official end of Ramadan. 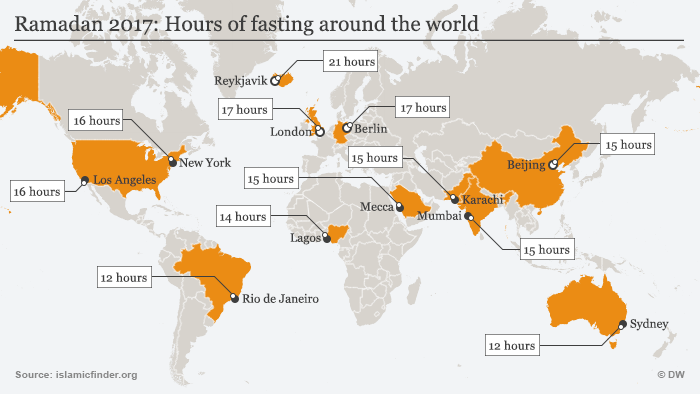 How is Ramadan observed?

Ramadan is often observed through fasting from sunrise to sunset. Before sunrise, observing Muslims eat a meal known as Suhoor before praying. After sunset, they break their fast in a meal known as Iftar, which is often taken in a communal setting. However, due to the geographical location of some Muslim communities, fasting hours may differ.

According to religious scholars, in countries where the day and night cannot be distinguished, such as in Norway and Iceland during the summer months, Muslims may observe fasting in accordance to the timetable of the closest country in which the two parts of the day can be distinguished.

Other scholars have agreed that observing Ramadan in accordance with the timetable of Mecca in Saudi Arabia is acceptable as well.

Before the celebration of Eid al-Fitr that marks the end of the fasting month, Muslims are expected to offer alms to the poor and, in some areas of the world, even provide a portion of their food. Reading the Quran and participating in the five daily prayers prescribed by Islam also form part of the observance of Ramadan.

There are exceptions to fasting during Ramadan, which include in cases of sickness, traveling, menstruation, pregnancy, nursing and old age.

Traditions and rituals of Ramadan

Ramadan marks a special time of spiritual discipline and purification for millions of practicing Muslims across the globe. From local traditions to holy rituals, DW examines the religious month of fasting. (27.05.2017)