What next for Kai Havertz and Bayer Leverkusen?

The German Cup final may have brought down the curtain on Kai Havertz’s time at Bayer Leverkusen, the club that has raised him. So what next for Germany’s brightest young star and the club he looks set to leave behind? 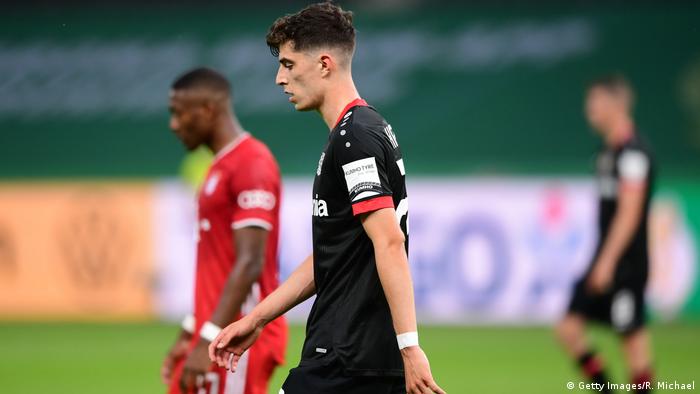 Less than 24 hours had elapsed between the final kick of the German Cup final and reports that Kai Havertz was to meet with the Bayer Leverkusen hierarchy to discuss his future.

If the curtain is indeed falling on his time at Leverkusen, he can reflect on 10 years that have elevated him from a talented 11-year-old from Aachen into Germany's most eminent young star. His ability has been nurtured and developed in a way that reflects well on Leverkusen's academy and there's still an argument to be made that one more year at the club would be beneficial.

On Saturday, the last kick of the final was Havertz's. An assured penalty that restored a grain of pride for a Leverkusen team that were well beaten by Bayern Munich. It was neither a goal he will remember fondly or a personal performance that ranks among his best.

Despite some bright moments, Havertz failed to have a huge impact in Berlin. Nullified by Joshua Kimmich for long periods, he only started to influence the game in the second half as gaps appeared for him to exploit and he may have had an assist to his name had his teammates been as clinical in front of goal as Bayern.

While Leverkusen will do everything to keep Havertz for another year, his departure this off-season seems inevitable.

With Bayern Munich chairman Karl-Heinz Rummenigge admitting a “Havertz transfer will not be financially possible for us this year”,  Chelsea have become the  frontrunners to secure his signature and add to their growing German contingent following the signing of Timo Werner. But Barcelona and PSG retain an interest in the 21-year-old with Liverpool and Manchester City are also monitoring developments.

Wherever Havertz goes, he needs to play games – and that's one of the reasons why Frank Lampard's Chelsea appears the most realistic option. Midfielder Jorginho looks set to depart too, and with the Blues seemingly returning to a policy of elite signings, all roads lead to Havertz.

Bayern have a history of snapping up top Bundesliga talent, but a review of their spending strategy has put the €100 million ($112 million) price tag beyond them. Bayern coach Hansi Flick touched on this when asked about Havertz after the final: "The corona times have changed a lot. Bayern are no longer able to spend money so easily and must proceed carefully.”

Where next for Leverkusen?

Missing out on Champions League football next season was a blow to Leverkusen's lingering hopes of holding on to their crown jewel and finding an adequate replacement. There is no hiding the fact that, even for €100million, Peter Bosz's squad will have a large Havertz-sized hole in it – but it's not all doom and gloom.

Leverkusen will still have an exciting squad on their hands, with Edmond Tapsoba, Exequiel Palacios and Moussa Diaby all 21 years old or younger and primed for a big season ahead. While they could do with a reliable striker and a creative spark in midfield to replace Havertz, Bayer are not shorn of quality.

However, Havertz's potential departure, just a season on from losing Julian Brandt to Bundesliga rivals Borussia Dortmund, would represent a significant setback for a side that have made great strides in recent seasons.

Whatever happens, this promises to be a crucial transfer window for Bosz, Leverkusen and Havertz.