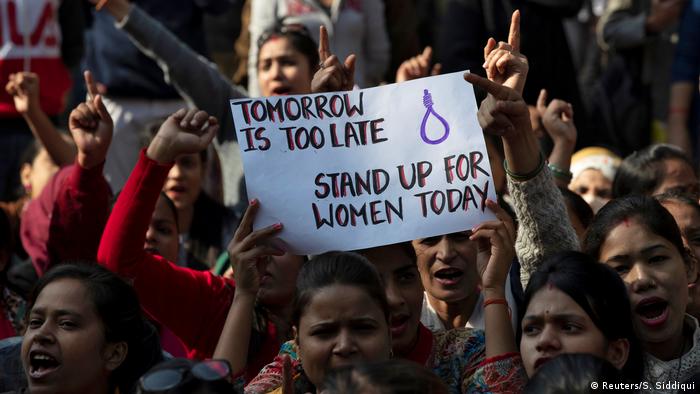 India's Supreme Court on Wednesday rejected appeals of all four men involved in the 2012 New Delhi bus rape, confirming a sentence of death for the crime. The convicted men can still file a curative petition to the court, asking it to reexamine the decision. They can also plead for mercy from the Indian president.

In 2012, the brutal rape and murder of a 23-year-old physiotherapy student grabbed international headlines and sparked embittered protests across India.

The court's decision comes just weeks after another woman was set on fire and killed by a group of men, including two of her alleged rapists. The 23-year-old girl in the northern Indian state of Uttar Pradesh was on her way to a hearing of her rape case when a group of men assaulted her, doused her in gasoline before setting her on fire.

Crimes against women have been on the rise in the South Asian country. In November, a 27-year-old vet in the southern city of Hyderabad was raped and set on fire, sparking huge protests across the country.

In January last year, an 8-year-old girl in Jammu and Kashmir was brutally raped and murdered. The Muslim girl was allegedly kidnapped, confined using sedatives and repeatedly gang-raped in a temple. She was strangled and then hit with a heavy stone.

According to the latest government figures, Indian police registered 33,658 cases of rape in 2017. Experts say that a woman is raped in India every 16 minutes.

India, thus, has been dubbed "the most dangerous country for women" by many human rights activists. But why is India so prone to gender-based crimes?

"But people do get bail because of a lack of evidence [in many cases]. The accused are often sheltered by police, or politicians, or even lawyers," Kapur added.

Some researchers say the rape problem in India is not just a legal issue, as one cannot ignore its social aspect.

"We have a patriarchal society in India, which gives more importance to men. Women are usually considered second-class citizens," Dr. Shruti Kapoor, a feminist activist and founder of the Sayfty Trust organization, emphasized.

"Children internalize this at a very young age. A girl's wishes and her opinions are not considered as important as that of a boy's. The female child learns to be subservient from the beginning," Kapoor added.

Experts point out that violence against girls and women usually takes place in their immediate surroundings. According to the National Crime Records Bureau data from 2017, 93% of all rapes in India are perpetrated by people known to the victim. These could be family members, friends, neighbors, employers, and even online friends.

The Pune-based Equal Community Foundation engages with teenage boys from low-income households on gender issues. "Most of these boys believe that girls in Western clothes are immoral, and that they can be harassed because they are asking for it," said Pravin Katke and Rahul Kusurkar from the organization.

The organization provides these teenagers with a platform to have a dialogue with girls from their own community, as it hopes that by interacting with girls and listening to their viewpoint, the boys could be gender-sensitized. It also tries to raise awareness about topics like sexuality, consent and mutual respect — subjects that are profoundly neglected at schools in India.

Katke and Kusurkar are concerned about the recurring rape cases — not just in India, but all over the world. "We believe that men and boys are not naturally violent; patriarchal norms make them insensitive. Therefore, not every man is a part of the problem, but every man can be a part of the solution," they said.

Repeated rape cases have angered many Indians. Some are now demanding the capital punishment for rapists. And there have also been calls for authorities to publicly hang the culprits. Experts say that this, too, shows a rise in violent tendencies in the country.

On December 6, the police shot all four accused of the Hyderabad rape case in an alleged extra-judicial killing. Many Indians lauded the police officers for dispensing "justice." Videos on social media showed women in Hyderabad city sharing sweets and celebrating the killings.

Analysts are of the view that a low conviction rate and the flaws in the country's judicial system are giving way to vigilante justice.

"People often say a tough law can bring about change. But what is a tough law? Law needs to be effective and the investigating agency and prosecution more proficient and efficient. That is a dire need," Seema Misra, a lawyer who works on women's rights issues, told DW.