What I learned scavenging for empty bottles for a day | Business| Economy and finance news from a German perspective | DW | 17.10.2018

Bottle collectors have become a common sight in German cities. Who are they? How much do they make? And what does digging through trash in broad daylight feel like? Our reporter took to the streets of Berlin to find out. 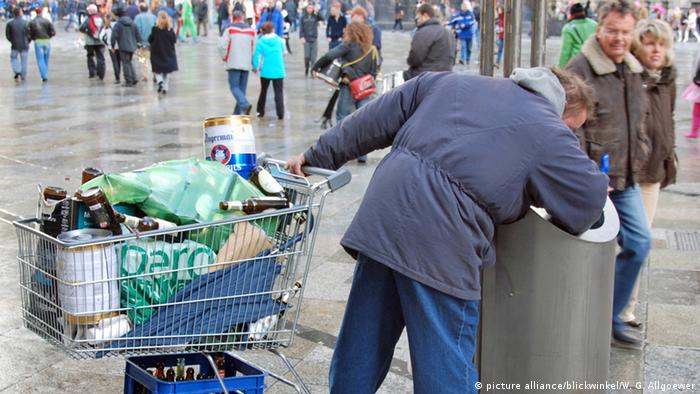 I dig down into the orange trash can. I'm looking for a plastic soda bottle that will fetch me 25 cents ($0.29). When I finally find it, I quickly pull it out, drop it into my plastic bag and walk on. I avoid eye contact with the people around me. But I know they're staring.

For many in Germany sifting through garbage in broad daylight would be unthinkable. But for others here it's just another day on the job.

There are no official numbers but walk through any German city or large town and you will spot bottle collectors. They walk the streets, armed with plastic bags or shopping carts. Once in a while, they might ask you for your empty bottle. Sometimes they will pick one up from the sidewalk — or pull one out of the trash. 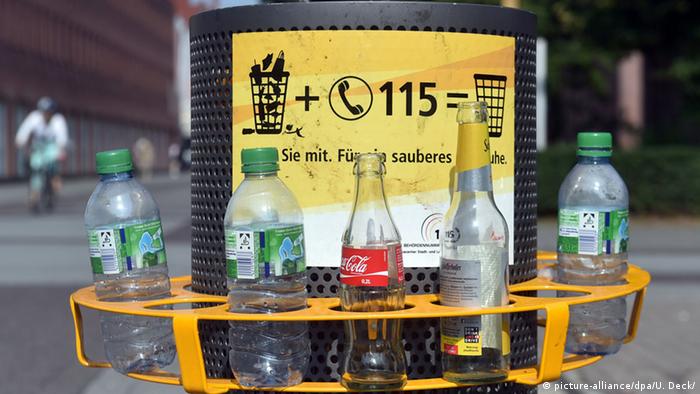 Many bottles and cans here carry a 25, 15 or 8-cent deposit that is refundable upon return to the supermarket, after which the receptacles are cleaned and reused or recycled. This system, initially created to protect the environment, gave rise to the urban phenomenon of the bottle collector.

Around 720 million bottles worth €0.25 each go unreturned every year. That means €180 million is lying around out there — not even counting lower-value bottles. To put it in business speak: There's certainly a market.

But how much can you really make in a day? Is it enough to live from? And who are the people moving around the city, collecting what others consider trash? Plastic bags in hand, I set out to find answers among the empty bottles strewn across Berlin.

'Excuse me, do you collect bottles?'

Trash cans are off limits in the beginning. I'm way too self-conscious to dive right in. Instead, I carefully scan the sidewalk as I plod along. I see bottles everywhere — leaning against trees, sitting on junction boxes or in front of houses. But they are wine bottles and don't carry a deposit.

The bottle-collecting professionals must have already made their rounds. Not to worry, I have time. And indeed, right there, in the bushes, I spot an empty beer bottle. There is a piece of lemon inside and, judging by the acidic, rotten smell, it's been there for quite a while. I pull the lemon out, shake the last few drops from the bottle and drop it in my bag. My first 8 cents. 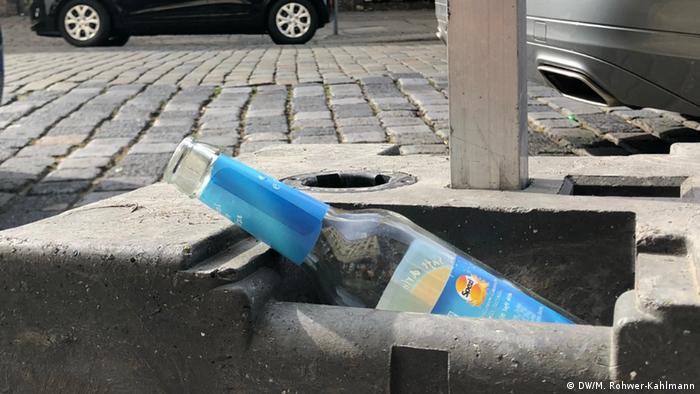 Bottles like this carry a deposit of 8 cents, others bring 15 or 25 cents

By the time I get to Alexanderplatz, I've managed to collect four bottles in an hour. This is hard work. I look around for a place to get a coffee.

A man catches my attention. He's carrying a bag with a "Star Wars" print and appears to be looking for something. I see him stop at a trash can, glance in, and then move on. I approach him: "Excuse me, do you collect bottles?"

Two packs of cigarettes in a day

I scared the hell out of him, Björn Kaiser* tells me a bit later as we sit sipping coffee under Berlin's iconic TV tower. Security guards often kick bottle collectors out of train stations, the 58-year-old says, and sometimes they patrol in plain clothes.

Kaiser collects bottles for six or seven hours a day, seven days a week. But soon — and he stresses this repeatedly — he will stop because he starts a new job as a taxi driver.

He had worked as an electrician for 22 years but then his employer went bankrupt. After a few temporary jobs he slid into unemployment.

"Ever since then, I'm just trying to get by," he says.

The state welfare payments he receives aren't enough to keep him going, so he supplements his income with bottles. "Two packs of cigarettes a day are feasible," he explains. That's about €15 a day in bottles.

Kaiser likes to keep himself busy and neat. He wears clean clothes, new sneakers, a mustache, has trimmed gray hair. "Just sitting around at home, what good is that going to do?" he asks.

Who are the bottle collectors?

Kaiser fits the profile of most bottle collectors.

"Bottle collectors define themselves as someone who still works and still takes part in society. It's a strategy of maintaining a sense of self-worth — which often works," says sociologist Alban Knecht, who published a study on bottle collectors.

Only a small number are actually homeless, Knecht tells DW. Most are pensioners or welfare recipients, who still struggle to make ends meet. They use the bottles as a top up. Knecht says it's a sign of a "broken" welfare system.

"The deposit system generally is a good thing. But people walking around and collecting bottles is not a replacement for social welfare," says Knecht, adding that surviving on bottle collecting alone is not possible. 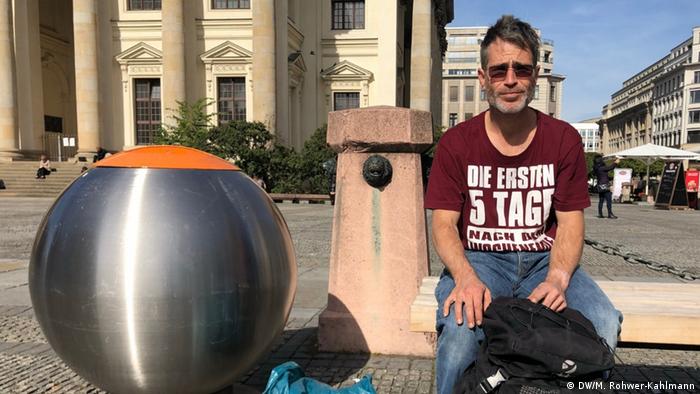 'I want to live and not only survive — that's why I collect bottles,' says Elmar, who holds down a full-time day job

Especially, if you do as poorly as I have. I realize why there is still plenty of room in my first bag when I meet Elmar, who did not want to provide his surname. He plunges into trash cans, zigzags all over the place with a large garbage bag and a hiking backpack, takes cans straight off people. He gathers more bottles in one minute than I have over three hours.

The 46-year-old is an expert, who has been at it for several years. On a good day, he says he can earn up to €50. He has fixed routes, which he keeps a secret, and even goes collecting after his shifts cleaning staircases.

Is he embarrassed sifting through all this trash in public? "Nope. Money doesn't stink, and you can wash your hands," he says with a grin.

That is it. That is the spirit I have been lacking. I have been too shy, too restrained, not proactive enough. I start looking into trash cans. The first one is hard. So is the second one. With the third one, it becomes easier. I quickly find two plastic bottles and one can, each worth 25 cents. This could be the start of something.

Then the doubts creep in. I imagine what could be hidden in the garbage. Syringes? Shards of glass? This is dangerous, I convince myself. I decide I am done with trash cans and go back to collecting a few more bottles off the street. 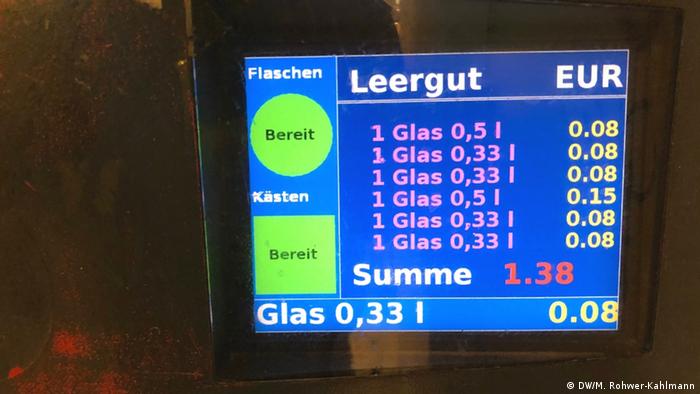 People return their bottles at special machines in supermarkets

In the evening, I head to the supermarket to return my meager haul to a special machine. My feet hurt. My hands are dirty. And I've earned a grand total of €1.38, reads the display. Perhaps if I'd brought gloves, I'd have had fewer qualms?

But no. It wasn't squeamishness that kept me from collecting more. It was pride when pride is, in fact, what bottle collecting is all about.

You might think that digging through garbage for dirty bottles would make someone an outsider. But people do it so as not to become outsiders. They refuse to be pushed out of society. They give up pride to retain their pride. Bottle after bottle.