What did you do during lockdown? Elton John made an album | Culture | Arts, music and lifestyle reporting from Germany | DW | 22.10.2021

What did you do during lockdown? Elton John made an album

It's been a while since he released a new album, but no sooner had Sir Elton Johnreleased his new track "Cold Heart" than it went to the top of the charts.

The track, which also features singer Dua Lipa, knocked the long-running pop king Ed Sheeran off the British charts. But the 30-year-old Sheeran is hardly heartbroken since he's also a major fan of the 74-year-old British superstar.

So much so that he called on his fans to get Elton John to the top of the charts. For the 74-year-old, who was knighted by the Queen for his contributions to charity and music, it is a place he hasn't held for 16 years.

"Cold Heart" is a medley in which several songs are mixed together into one, including some of John's biggest hits.

With the help of the Australian pop duo Pnau, John's old tracks "Sacrifice" and "Rocket Man," as well as parts of "Kiss The Bride" and "Where's The Shoorah" have been transformed into a pop-dance number that appeals to both the older generation who can sing along with the classic hits, as well as the younger generation who may simply like the song's contemporary sound. The new album, called The Lockdown Sessions, will be released on October 22.

It's clear that John is aiming for multi-generational appeal with this latest release. Proof is in the lineup of participating musicians — it's a veritable all-star collection of hit makers from the past decades. In addition to the 26-year-old Dua Lipa, John collaborated with other young artists including Charlie Puth, Young Thug & Nicki Minaj and Lil Nas X — many of whom are young enough to be John's grandchildren.

The album also features Elton John jamming with many other hit musical acts from a diverse range of genres, including the Gorillaz, Eddie Vedder of Pearl Jam, Stevie Nicks of Fleetwood Mac and even Stevie Wonder. Six of the songs are covers, while ten are entirely new.

One of the most interesting collaborations is a cover of the Metallica hit "Nothing Else Matters." The track features a number of musicians whose names are sure to ring a bell. In addition to Elton John on piano, there's Chad Smith of the Red Hot Chili Peppers on drums, Metallica bassman Robert Trojillo and even genre-crossing cello star Yo-Yo Ma. The crowning touch are the vocals by US pop starlet Miley Cyrus, whose deep voice proves she could easily be lead singer of a very loud rock band.

While many people were bored and kept busy during the pandemic lockdown watching Netflix and making trips to the grocery store, Elton John got creative. He made use of his global musical network and met with the other artists via Zoom or in the studio. The aim was to get to know each other, exchange ideas and ultimately make music. John left the trodden path — something which probably wouldn't have happened without his collaborations with the many young musicians he corresponded with during lockdown.

During a Zoom interview, Elton John raves about the sessions. He described feeling "magic and happiness" when he thinks about these recordings born out of lockdown. 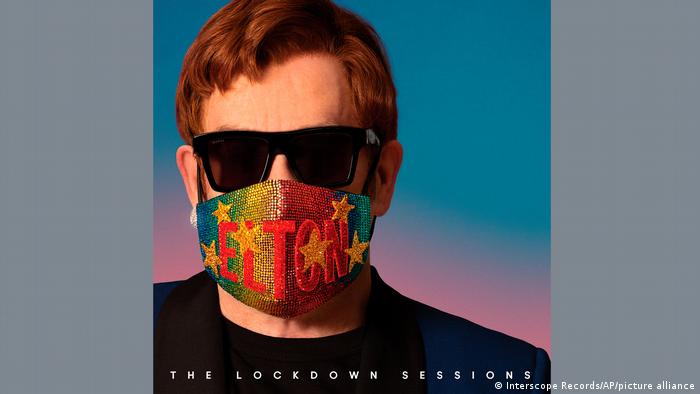 "I've created and cultivated friendships with young musicians, and that's really spurred me on," he said adding that he'd also like to collaborate with Billie Eilish, whom he adores. "It excites me when I hear something new by somebody new."

For now, though, he's looking forward to the release of the record. He's been counting down the hours on his Instagram account, which is followed by 3.7 million people. One thing is for sure: both old and new fans can look forward to hearing varied mix of music, ranging from modern pop to classic rock. And the good news keeps coming. Fans of Elton John and Ed Sheeran, listen up: the two are planning a joint Christmas song.

With his extravagant appearances and legendary songs like 'Candle in the Wind,' Elton John became a pop icon. Now, he's bringing out a new album: 'The Lockdown Sessions.'