What are the main tasks for Olaf Scholz and Germany′s new government? | Germany | News and in-depth reporting from Berlin and beyond | DW | 09.12.2021

What are the main tasks for Olaf Scholz and Germany's new government?

Germany's incoming coalition government needs to hit the ground running. Fighting the COVID pandemic is the most pressing task.

Germany's new government of center-left Social Democrats (SPD), Greens, and business-oriented Free Democrats (FDP) has vowed to "Dare to Make More Progress." But the battle to curb COVID-19 is the most pressing issue.

The new German Minister of Health, Karl Lauterbach(SPD), spoke of this being Germany's biggest health crisis since World War II. "It is quite clear to me that this will be the most difficult task of my life as well," Lauterbach said.The number of new infections is rising to dizzying heights and more than 100,000 people have already died with the virus in Germany so far.

Chancellor Olaf Scholz (SPD), has set up a permanent coronavirus crisis team to report to the government on a daily basis.

It is made up of national and regional politicians, as well as virologists, epidemiologists, sociologists, and psychologists.

"We should make vaccination mandatory in places that care for particularly vulnerable groups," Scholz announced earlier this month — but he added that any decision on making vaccination compulsory in the general population would depend on specific circumstances. There are plans to expand the use of mobile vaccination teams and offer COVID vaccinations in pharmacies as well.

There are plans for bonus payments for health care workers. The new government also aims to make care work more attractive by boosting staffing levels and wages. Germany has a shortage of health care workers. Many ICU nurses have quit or gone part-time following the stressful first waves of the COVID pandemic.

The new government wants to continue Germany's previous efforts to create a "strong, sovereign and open European Union," Chancellor Scholz said. His foreign trip after taking office will take him to Paris this Friday (Dec. 10, 2021) to meet with President Emmanuel Macron on how to proceed with EU policy.

Foreign Minister Annalena Baerbock(Greens) already traveled to France on Wednesday before moving on to Brussels, and the Polish capital Warsaw on Friday.

According to its coalition agreement, the new German government wants to strengthen the powers of the EU Parliament and adopt a tougher line against any violation of the rule of law by EU member states such as Poland and Hungary. The Scholz government also wants to forge greater cooperation between national armies with joint command structures and a joint civil-military headquarters.

The new governemnt also reaffirmed its support for Ukraine in light of growing pressure from Russia.

Germany wants to work towards a comprehensive China strategy within the framework of the common EU-China policy, to balance economic interests and human rights against the background of a systemic rivalry.

With regard to the situation in Turkey, the new coalition sees many "worrying domestic developments and foreign policy tensions" there and therefore does not want to open new accession talks to the EU.

The coalition members want to strengthen transatlantic ties and see the United Nations as the most important institution of international order and consistently emphasize multilateralism, the joint cooperation of states.

The policies towards Israel remain unchanged.

Climate change is the main focus and the new government wants all future laws to be double-checked regarding their effect on climate change. Renewable energy will be boosted by installing solar power facilities on new commercial buildings and residential houses and by creating more wind farms, in particular at sea. The ambitious goals: By 2030, 80% of electricity should come from renewables and 50% of heating should be climate neutral. Likewise, coal should, if possible, be phased out by 2030 and the days of the combustion engine will, finally, be numbered.

Citizenship laws also look set to change. The coalition parties are planning a series of reforms to make getting German citizenship easier. Naturalization is to be possible after five years, or after three years if the applicants have distinguished themselves in terms of integration. Children born in Germany to non-German parents will automatically get citizenship if one of the parents has been resident in the country for at least five years. According to the coalition agreement, migration should be "forward-looking and realistic", while "irregular migration" should be cut down. The coalition also aims to reduce the burden on the Federal Office for Migration and Refugees. Visas are to be dealt with digitally and faster. Likewise, there are plans to abolish current employment bans "for people already living in Germany."

The coalition aims to make Germany fit for the digital future and dismantle current bureaucratic hurdles. The three parties want to start by reforming administrative structures. The SPD, the Greens and the FDP see digitalization and transparency within the public sector as the way to achieve that. Their aim is to speed up approval processes, particularly when it comes to infrastructure projects. 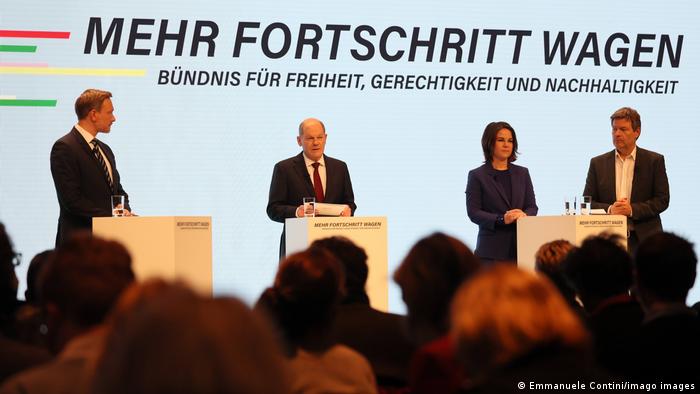 The new coalition wants to replace the current unemployment benefits scheme known as Hartz IV with what they call a citizen's income. In 2022, it will be raised to €449 a month for a single person — an increase of €3.

Germany's population is aging. The incoming coalition has agreed to keep the retirement age at 67. Pensions should not drop beneath 48% of current average income levels. For the next four years, pension contributions will stay frozen at 20%. 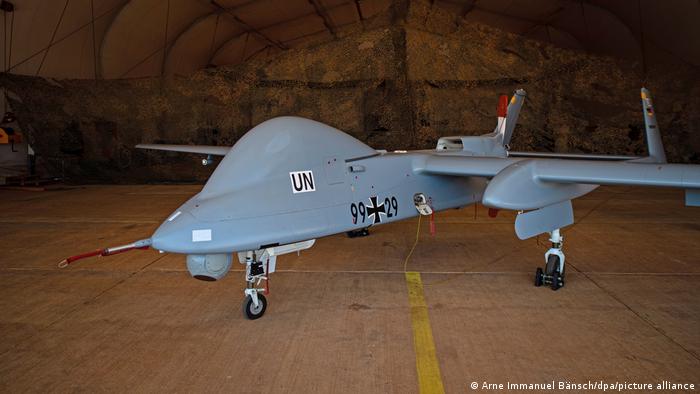 The incoming German government is set to arm military drones

Defense: Armed drones for the army

The German armed services will, in future, be able to arm their drones —  subject to "binding and transparent terms and the consideration of ethical and security aspects." The coalition treaty states: "Armed drones can contribute to the protection of members of the armed services on international missions."

The moratorium on new debt remains on hold until 2023, as the economy still needs help to get through the pandemic. The state will have to continue to dig deep into its pockets. Likewise, additional billions will have to be provided to fight climate change and make the transition to renewable energy. 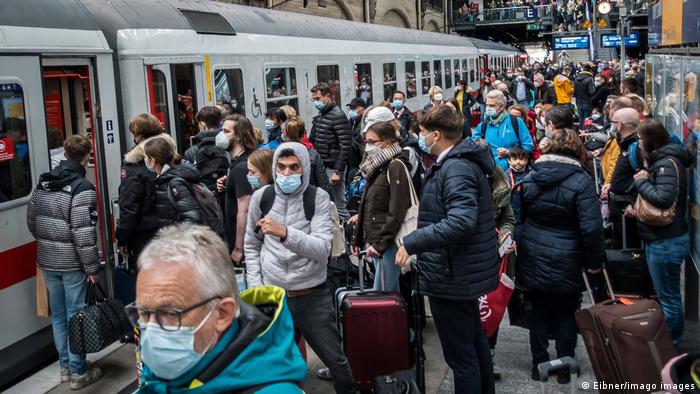 The Greens had initially been calling for a speed limit on all of Germany's interstate highways but failed to push this through. Instead, the goal now is to have at least 15 million electric cars on German roads by 2030  —  with the corresponding expansion of the charging station infrastructure. Rail transport should also play a more important role. For instance, more freight cargo should be moved from road to rail.  Freight rail traffic should increase by a quarter compared to current levels.

In areas with strained housing markets, rents should only be allowed to rise by up to 11% in three years. Up to now, 15% increases were possible. Some 400,000 new apartments should be built per year — 100,000 of those are to be built with public funding.

There's a consensus among all German political parties that education is a key investment in the future. The coalition treaty says that Germany wants to "provide everyone with the best education opportunities irrespective of their origin, to enable and ensure participation and social mobility via inclusive education."

The three parties aim to support schools in socially disadvantaged areas, in particular. The modernization of the school system by means of new digital technology is at the forefront of these ambitions. The goal is to create "contemporary learning environments and creative laboratories." 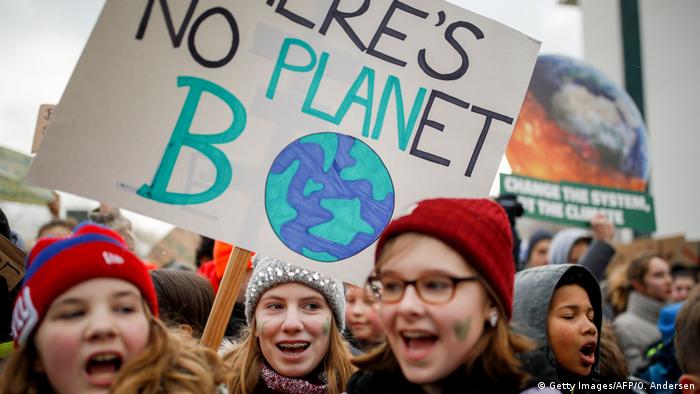 The Fridays for Future movement has been very vocal in Germany, too

The "Fridays for Future" demonstrations have shown that young people want to and are able to get involved in politics. The coalition agreement wants to take that into account by reducing the voting age from 18 to 16. This, however, would require a change in Germany's constitution — and would therefore need backing from some of the opposition parties.

Drug policies: Chilling out on cannabis

The incoming government has agreed to introduce the "controlled sale of cannabis to adults for recreational  purposes in licensed stores." The coalition parties expect that this will "ensure quality control, prevent the spread of contaminated substances and guarantee the protection of minors."

This article was originally written in German and has been updated since its first publication on November 26.