WeWork all over the world

The shared-office space startup WeWork wants to help its members "create a life, not just a living." With a $17-billion valuation, investors seem to agree and help the project become a big success globally. 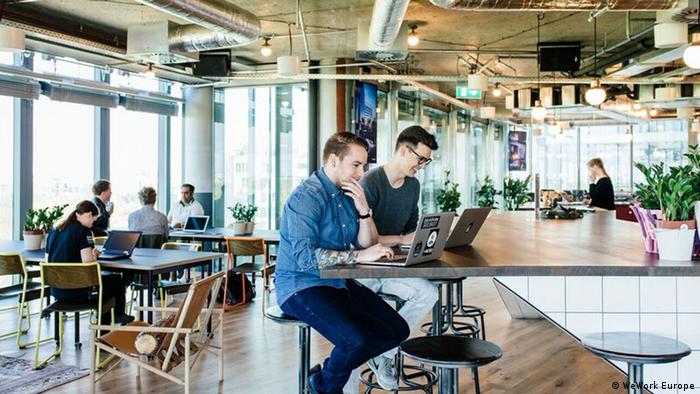 When Adam Neumann and Miguel McKelvery founded WeWork Cos. in 2010, they had two offices spaces in New York. Now the office-space rental startup is valued at $17 billion (16 billion euros and has more than 130 locations in 30 cities across the world.

"It starts with the space," said Eugen Miropolski,the managing director for WeWork Europe. Walking into WeWorks offices spread over four floors at Berlin's Sony Center, the coworking space could easily be mistaken for a hip coffee shop, if not for the towering view of Berlin's Tiergarten and the German Bundestag from the sleek steel and glass building.

From the pendant lighting and leather couches to the fruit water on tap and the ambient low-fi hip hop mix playing softly from seemingly everywhere, much thought has gone into designing this space. It is almost antithetical to the fluorescent lit cubicles of the old offices of lore.

WeWork's second location in Berlin is nestled in between the luxury boutiques and upscale restaurants in the center of the city. The company will open another location in Berlin later this year and is expanding to Frankfurt and Hamburg in the fall, providing space to around 3,900 members by the end of the year.

A modern office with a mission

The idea is "Do What You Love," and to let WeWork take care of the rest. The amenities like internet and printing, and even healthcare and payroll support in some cases, illustrate the kinds of services that WeWork provides with its membership. "You come in with your laptop and you can start working from the minute you get here," said Eugen Miropolski.

The company offers membership at three tiers: open co-working spaces, dedicated desks and private offices for small companies. All plans have a flexible leasing plan with rates in their German spaces ranging from 320 to 560 euros per month.

WeWork wants to build a "community of creators." Community Managers work hard to know all of the members at their locations and coordinate events like Wellness Wednesdays and industry meet-ups. On the backend, WeWork has built a platform that works like an internal LinkedIn where members can connect and share ideas and services.

An operating system for real estate

WeWork's $17-billion valuation is based on more than renting trendy office space. Its business model of taking on long-term office leases and then subletting space at a premium price has created a market that traditional commercial real estate brokers were not reaching. 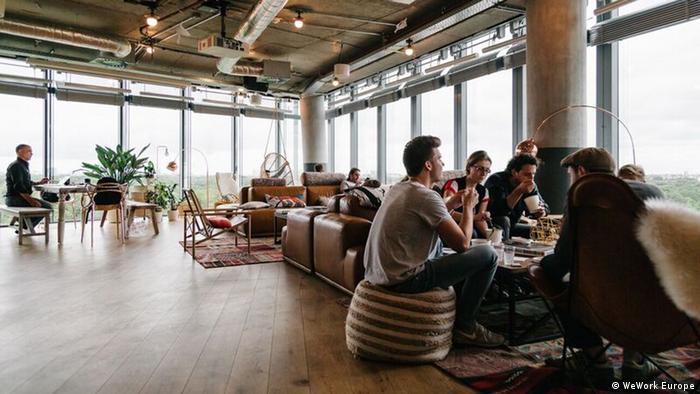 The infrastructure provided by WeWork leaves nothing to be desired, helping people to be more creative

It has raised around $3.7 billion in private equity and venture capital since it was founded in 2010. In March, the Japanese media and tech conglomerate SoftBank invested $300 million more. CNBC reports that SoftBank has plans to invest $3 billion in WeWork, which could push the company's valuation to $20 billion.

Over the past seven years WeWork has earned the moniker of being an operating system for real estate and its investors are betting on a big tech return. Its sky-high valuation brings it closer to the top of what the Wall Street Journal coins "the Billion-dollar startup club."

Some critics question such a high valuation. Documents leaked to Bloomberg News last year show that company cut its 2016 adjusted earnings projection by 78 percent from $65 million to $14 million.

To date there are over 100,000 members working out of the 7 million square feet that make up WeWork locations across the world. WeWork Paris opened this April and the company has plans to open an office in India soon. "In the future I believe that there will be a WeWork location in any major city in the world," said Eugen Miropolski.

The company has come of age in a time where seismic changes have occurred in the workforce and the global economy. WeWork has been able to capitalize on both the tech boom as well as the increasing volatility in industries like consulting, design and programming.

In the United States, about 34 percent of the workforce get their income outside of the traditional 9-to-5. Historically, Germany has had a low rate of entrepreneurship in comparison to other countries. But Eugen Miropolski is first to say that WeWork expands to places where people want to be. WeWorks' two Berlin locations have been booked to full capacity, with waiting lists, since they opened.

Berlin has a vibrant startup ecosystem that is home to around 2,400 startups by some estimates. Miropolski says that the culture of innovation and entrepreneurial spirit isn't unique to Berlin and exists in cities like Frankfurt and Hamburg where it will open spaces later this year.

Similarly some of WeWork's local competitors in Berlin like Mindspace and betauhaus, already have coworking spaces in other German cities.

At the core Miropolski believes that the flexible, well designed space and international community are the key to WeWorks growth. The flexibility is a boon to startups that may be funded on a month-to-month basis.

Some of this risk is increasingly offset by the growth of enterprise clients like GE, Samsung and the auditing firm KPMG, who house some of their employees in WeWork locations and for longer-term contracts. At the location in downtown Berlin, some of the open spaces that give WeWork its cool coffee shop vibe, are being replaced by fixed space for AirBnB, whose new offices will take up the entire floor.