The US and EU urged Russia to find a political solution after announcing sanctions against officials allegedly involved in Crimea's secession bid. Chancellor Angela Merkel said sanctions had not been "taken lightly." 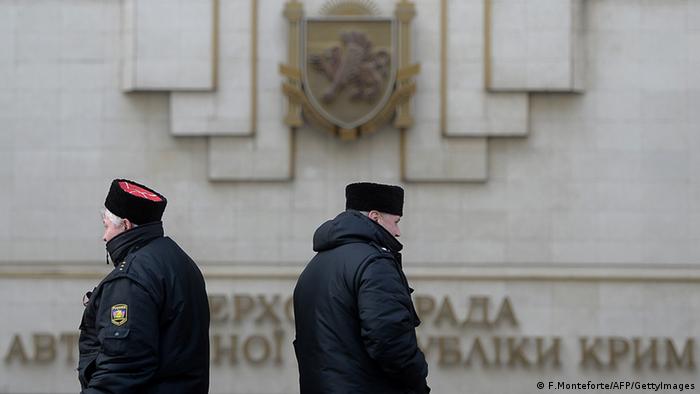 US President Barack Obama on Monday underlined Washington's commitment to working with its European allies to resolve the Ukraine crisis. He also warned that Russia could face further isolation following the Crimean referendum.

Obama said he was prepared to impose tougher sanctions on Russia over its alleged incursion into Ukraine's Crimea region.

"If Russia continues to interfere in Ukraine, we stand ready to impose further sanctions," said Obama.

"We'll continue to make clear to Russia that further provocations will achieve nothing except to further isolate Russia and diminish its place in the world."

Obama underlined the US' commitment to NATO allies, saying Vice President Joe Biden was on his way to Poland, Estonia, Latvia and Lithuania.

"As NATO allies, we have a solemn commitment to collective defense," he added.

The US president had earlier announced that the assets of seven Russian officials, including advisers to President Vladimir Putin, would have assets frozen for their alleged support of the Crimean vote. The US Treasury said it would also introduce sanctions against four Ukrainians, including former President Viktor Yanukovych.

The US sanctions followed bans and asset freezes by Brussels against 21 people - 13 from Russia and eight from Ukraine - linked to unrest in Crimea. The measures were announced after a meeting of EU foreign ministers earlier on Monday.

At a news conference that followed the announcement of sanctions, EU High Commissioner for Foreign Affairs Catherine Ashton emphasized the need for talks.

"Russia should withdraw its forces and begin direct negotiations with the government of Ukraine," said Ashton. "We commend the measured response shown by Ukraine so far in this crisis."

Foreign ministers meeting in Brussels resolved to support Ukraine financially and to sign an association agreement with the country on March 21.

Chancellor Angela Merkel said the decision to push ahead with sanctions had not been taken "lightly."

"It wasn't our aim. We wanted talks and a diplomatic solution but the clear violation of international law yesterday with the so-called referendum meant we had to take this step and I am glad that Europe showed such unity."

Ahead of the meeting, German Foreign Minister Frank-Walter Steinmeier stressed that sanctions should still leave "ways and possibilities open to prevent a further escalation that could lead to the division of Europe.

Crimea on Monday made a formal application to Moscow, for annexation into the Russian Federation.