'We're living in an occupied country'

Ranchers Jim and Sue Chilton have been fighting for years for better US-Mexico border protection. Donald Trump is the only one they trust to stop the drug cartel that controls their land. Ines Pohl reports from Arizona. 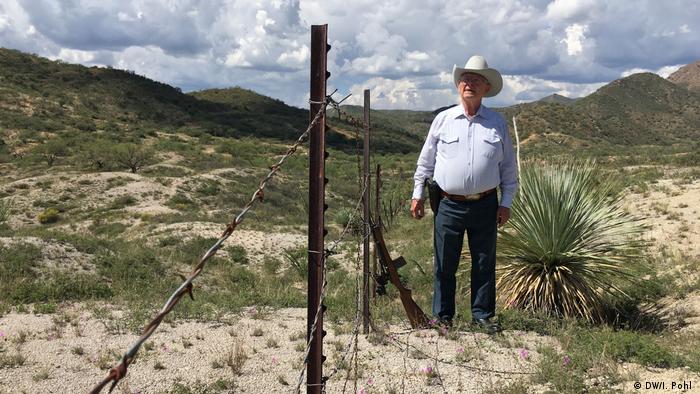 Every few meters there's a rusty steel post holding up lines of barbed wire. From a distance you can scarcely make them out in the sandy, hilly landscape, between the cacti and the desert grass. And under the blazing sun you have to look closely to see all the places where the barbed wire has been repaired. The glint of fresh metal gives them away.

Jim Chilton is 77 years old, and has a bit of a belly. It takes him less than a minute to crawl under the fence. With that he has crossed the border between Mexico and the United States. He's hung his pale cowboy hat on one of the steel posts, but the Colt stays in its holster on his heavy leather belt - always close at hand.

Almost all are drug smugglers

Thousands of people cross their land every year. No one knows the exact figure. They leave behind tons of plastic rubbish. When cows eat it, they die a painful death. The people cut through the fence, causing further losses when the cows escape. "These days, one of my cowboys' main jobs is fixing fences," says Jim. 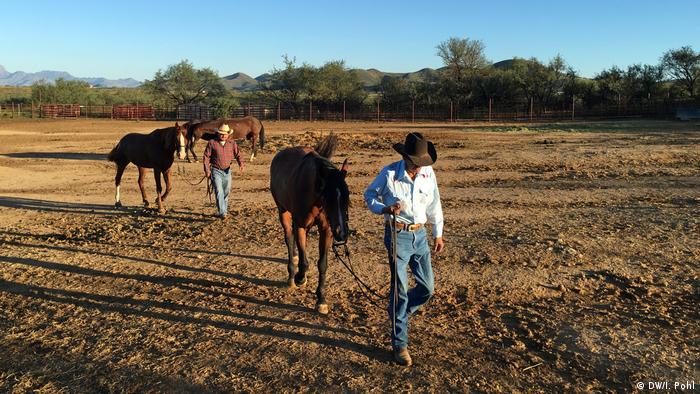 Above all, fewer and fewer of those who cross the border are people looking for work, hoping for a better life. Instead, they're drug smugglers controlled by the Sinaloa Cartel, one of the most brutal criminal organizations in the world.

"Crossing the border has gotten way too dangerous for ordinary people looking for work," says Jim. He explains that they too are forced to carry drugs. He shows photos of bushes with women's underwear hanging off them. "Those are the trophies the criminals hang there after they've raped their victim, sometimes for days." His steely blue eyes narrow to slits as he says this. "It's wrong, what's happening here on my land, what's happening here in America."

He's been farming his 20,000-hectare (50,000-acre) ranch, employing four cowboys, since 1987. That's more than 28,000 football fields - a lot of land, even by American standards. Some 800 hectares belong to him and his wife, Sue; the rest is leased by the state. That's usual in this Arizona border region. Jim owns a herd of just under 1,000 cows. A former investment banker, with university degrees in politics and business administration, he makes most of his money from the sale of young cattle.

Jim was almost 50 when he decided to carry on the family tradition, giving up his life in politics and banking. The Chiltons have been ranchers for five generations. His ancestors drove the first herds through Arizona in 1888. One of the main reasons why they chose this farm, 110 kilometers (68 miles) southwest of Tucson, was that there are a lot of springs on the land. "Water's the most important thing in raising cattle," he says. Thirty years ago the fact that the Mexican border was only 16 kilometers from his ranch, and his land ran right along the border for eight kilometers, wasn't a consideration for him. Now, this proximity to the international border determines his whole life. 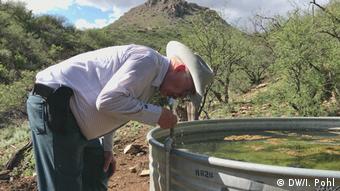 "Right from the start there were Mexicans who would cross the border to work in the US. That never bothered us," says Jim. "When we came across them we'd give them water and show them where there were more watering places on the way across our land." In the summer months the temperature can reach 40 degrees Celsius (104 degrees Fahrenheit) in the shade.

Like his wife Sue, Jim keeps repeating the sentence: "No one should die on our land." Both are regular churchgoers. Seventy-four-year-old Sue conducts the Catholic church choir. Jim continues to install little spouts on his cattle's 20 water troughs, so people can drink and fill their water bottles, even though he no longer finds the situation acceptable.

Many neighbors have given up

He and his neighbors have been fighting for years for proper border patrols: "Long before Donald Trump talked about a wall, we were calling for one." More and more of his neighbors have given up - they don't believe anything's going to change. They don't believe that proper roads will finally be built along the border or that there will be manned posts near the border so it doesn't take three or four hours for police to get there when they're called or when the surveillance cameras show long lines of men carrying heavy packs and armed with AK-47s snaking their way across the terrain. Friends have sold their farms for half their worth, happy to have found anyone at all to take them. Usually it's the government that buys them, because no private individual wants to take the risk.

Taking on the drug mafia can have fatal consequences. Two families they're friends with have experienced this: Rob Krentz and Larry Link were shot after reporting stashes of drugs they found. Jim says that to be on the safe side, he himself left his ranch for a while after he stumbled across a group of drug smugglers and reported the goods they left behind. "I've never had to use my weapons, but I know why I always carry at least one gun."

No help from Washington 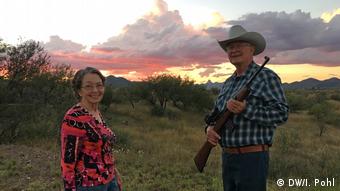 It's hard to get an overview of things around here; the many canyons offer excellent cover for the smugglers with their heavy rucksacks, weighing up to 30 kilos (66 pounds) and full of marijuana, cocaine or heroin. In addition, Jim explains, the cartel has set up sentries everywhere, and they have top-of-the-range equipment. They guard the area, and warn the smugglers. Once, he says, he came across one of these scouts, who dropped his radio telephone as he ran away. "It was worth more than $2,500. They're better equipped than our border patrol guards."

The Sinaloa Cartel has assumed complete control of the land. "When I'm out here, I feel as if I'm in an occupied country," says Jim. He stares down at his feet in their hand-stitched cowboy boots.

For decades, he and his wife were staunch Democrats. After university, Jim even worked for Democratic Senator Carl Hayden. This year, Donald Trump will get the Chiltons' vote. "We don't agree with everything he says and does. But he'll take care of us. Hillary Clinton's Washington gave up on us long ago."

A Trump supporter who warned MSNBC viewers of a taco epidemic in the US has tracked hundreds of tweets with the hashtag #TacoTrucksOnEveryCorner. Now he explaines to DW what his real intention was. (08.09.2016)

Republican presidential candidate delivers speech promising no path to citizenship for irregular migrants. His proposals included an "ideological certification" exam for migrants and having Mexico pay for a border wall. (01.09.2016)