Bremen moved into the Bundesliga top half for the first time this season after beating Leverkusen 2-1 on Sunday. Davie Selke and Zlatko Junuzovic did the damage for Bremen, which is now unbeaten at home since October. 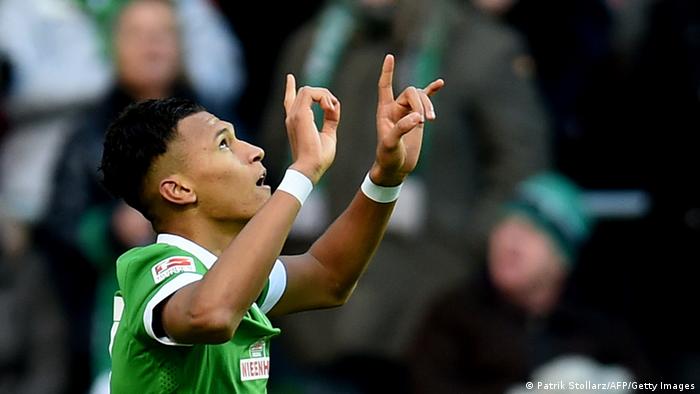 What a change in fortunes for Werder Bremen. When Gladbach condemned them to an eighth league defeat of the season on December 17, they sat bottom of the Bundesliga with only three wins and 14 points from the first 16 games.

After a four-match winning streak, however, they now sit safely in the top half of the table and with Viktor Skripnik's team beginning to gel, European football next season is no longer a distant pipe dream.

Even the absence of leading scorer Franco Di Santo did not deter Bremen, who took the lead with the game's first real chance in the 17th minute.

Fin Bartels won a race with Leverkusen's Bosnian defender Emir Spahic to a long ball down the left and he instinctively hooked a high ball into the box with the outside of his right boot. Running through the middle, Davie Selke caught the ball sweetly to send a right foot volley past Bernd Leno in the Leverkusen goal.

Leno then pulled off a fine save in the 25th minute, reaching to this left to turn away a goal-bound Theo Gebre Selassie header after an inswinging free-kick from Bartels.

Bremen doubled their advantage in the 28th minute after Leverkusen defender Omer Toprak was booked for protesting a handball he appeared powerless to avoid, with the ball rifled against the back of his arm from close range.

From the resulting free-kick, Zlatko Junuzovic compounded the visitors' misery by expertly curling his shot over the wall and into the top left hand corner of Leno's goal. 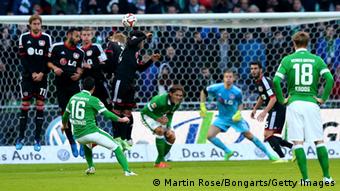 In the 42nd minute the Bremen back line was for once caught sleeping, as Leverkusen pulled a goal back. Karim Bellarabi escaped the attentions of two Bremen players at the corner flag and squared for Gonzalo Castro, who hit the post with a low drive.

Raphael Wolf saved the rebound from full back Wendell but the ball broke to Turkish midfielder Hakan Calhanoglu, who nodded the loose ball into the net from one meter.

Leverkusen dominated the opening exchanges of the second half. With Bellarabi causing more problems down the right, he raced into the box and forced a corner from which Stefan Kießling hit the post in the 52nd minute.

Schmidt was sent to the stands in the 64th minute for protesting a reckless Bremen lunge on Kießling but his team continued to press Bremen high up the pitch. In the 72nd minute Bellarabi blazed over after Wolf could only push a header into his path.

With Leverkusen dominating the second half, Bremen were reduced to hitting the visitors on the break. For all the opposition's possession, however, it could not carve out a clear opening and Bremen held on for its fifth win in six Bundesliga matches.

A first defeat since a 1-0 reverse at Bayern on December 6 will hurt Leverkusen, but it retains a six-point cushion in the last Europa League qualification slot. The problem for Roger Schmidt and his men now is scoring goals; Leverkusen has not scored more than once in a game since putting five past Cologne on November 29.

Augsburg moved to fourth in the table after recording its first draw of the season in the 2-2 match with Frankfurt. Goals from Ragnar Klavan and Raul Bobadilla were canceled out by Stefan Aigner and Alexander Meier. (08.02.2015)