Economic Affairs Minister Sigmar Gabriel has called Germany's role in the global weapons trade a "disgrace." His stance has resulted in a clear reduction of export licenses, and therefore profits, for the arms industry. 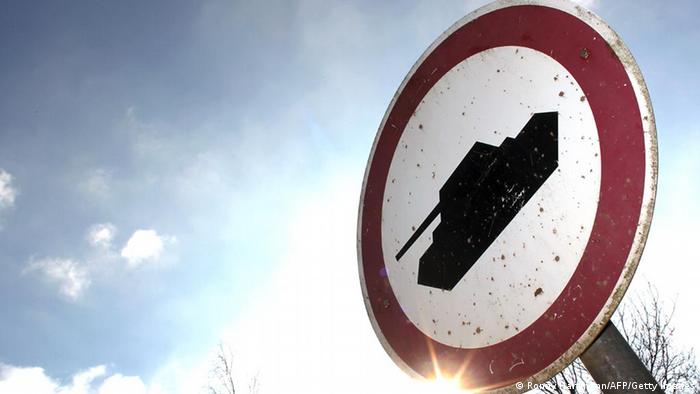 The number of licenses granted for military equipment exports has decreased significantly under Vice Chancellor Sigmar Gabriel, according to a report by Germany's Süddeutsche Zeitung on Monday. The Social Democrat, who is also economic affairs minister, had promised upon taking office in 2013 to reduce Germany's role in the global weapons trade.

"It is a disgrace that Germany is one of the largest weapons exporters in the world," he said last year, around the time he blocked the delivery of up to 800 Leopard 2 battle tanks to Saudi Arabia by refusing to grant licenses for the essential German parts needed for a Spanish firm to build the tanks.

Revenue from weapons export licenses was 3.97 billion euros in 2014, down from 5.8 billion in 2013, according to the report, which is based on information the opposition Left party had requested from the Economic Affairs Ministry. Even so-called collective licenses granted for politically unproblematic exports fell in value in 2014, down to 6.52 billion euro, although the proportion of grants to requests for non-EU and non-NATO countries remained constant at 60 percent.

Weapons exports had boomed under Christian Democrat (CDU) Chancellor Angela Merkel and her former coalition partners in the neoliberal Free Democratic Party, but Gabriel has taken up the cause of reducing arms exports, citing his party's coalition agreement with the CDU when faced with criticism.

Despite Gabriel's negative stance on the export of military equipment, especially when it comes to supplying non-EU and non-NATO countries with weapons, last week Germany's Federal Security Council approved the delivery of shooting-simulation systems to Saudi Arabia and tanks to Kuwait, though both nations have received extensive criticism for their human rights records.

Germany has decided to cease exporting weapons to Saudi Arabia because of ongoing conflicts in the Middle East. But Germany's weapons industry stands recoup some losses with a consignment of submarines to Australia. (25.01.2015)

US arms sales down, Russia's up: SIPRI report on international arms transfers

Most weapons are produced and sold domestically. As a result, weapon sales are seeing a year-on-year drop in the US - and a corresponding rise in Russia. But experts say the trend might not last. (15.12.2014)