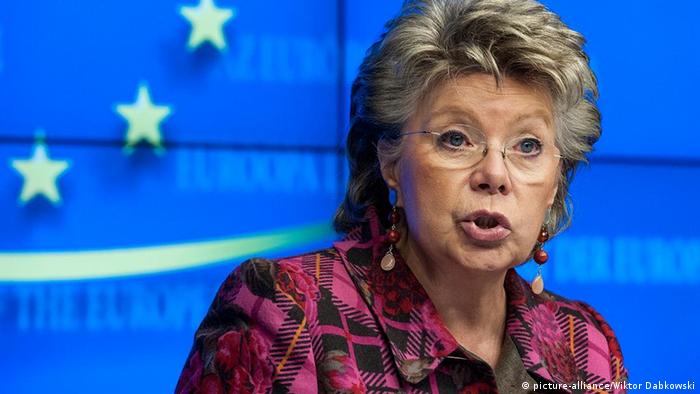 DW: As a consequence of the financial crisis, there's been increased debate on a European political union. Rightly so, or is it more or less a reaction born out of desperation?

Viviane Reding: We've been discussing a political union for decades. But it's always the same old story in Europe: when things are going well, we lean back and look at everything from afar. But when we run into difficulties, we clamor for rapid reforms. This time, reforms are happening at a much faster pace than what we are used to. We must consolidate Europe as a union if we want to survive at all.

Look at the differences between the US and the EU. The US has a bigger mountain of debt and a bigger deficit than the eurozone. Their debt amounts to 101 percent of GDP, Europe's deficit stands at 91 percent of GDP. Deficit in the US: 7 percent of GDP, and 3 percent in the eurozone. So, their situation is worse than ours. But have you ever heard of the dollar being in danger? Never. Why not? Simply because they created a fiscal and political union. That is exactly what we must do, too, in order to secure our economies and, secondly, to still have a say in the international community tomorrow.

Such a union has many supporters. All the same, the devil is in the details. European politicians' ideas on a political union differ. What's your vision? What kind of a structure should such a union have?

It wouldn't be very different from what you have in Germany. You have a federal government and federal states that have a voice. That's how I would envision the European Union: as a European federation, a European alliance. It's not about abolishing the individual state. Of course, we want to keep our established cultural diversity and our languages. But we need a strong federal government and a strong European parliament. For instance, a parliament with two chambers, the same as in Germany. What we have today is a hybrid form. Perhaps we need a parliament elected by the people directly, where every citizen has a vote, and a representation of the states that allows every country equal representation. This European parliament would elect the head of such a European government. That's the kind of parliamentary democracy we need in Germany. 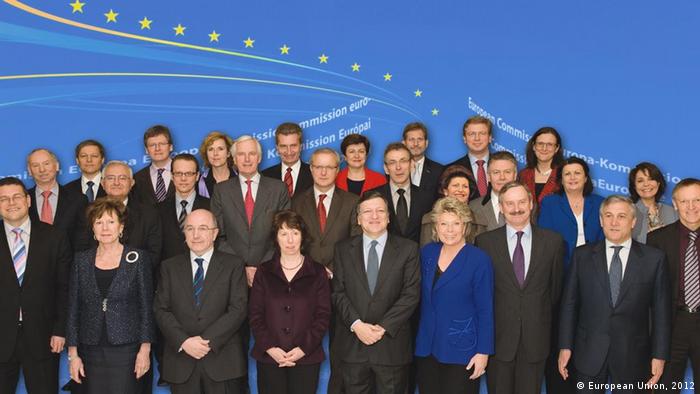 The European Commission, responsible for the day-to-day running of the 27-nation bloc

How much power would this head of government have?

The same as the head of government in Germany. There is a division of power between what the federal government and what the states are entitled to. In our case, it would certainly have to be foreign policies, financial and budget policies. And we would have to manage a budget that would accommodate Europe-wide economic policies.

If plans for a political union get more concrete, some European politicians might shy away from handing sovereignty to Brussels .How would you deal with that? 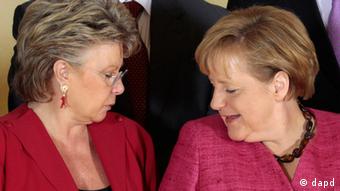 In that case, I'd repeat [German Chancellor] Angela Merkel's words: it's not about losing sovereignty, it's about sharing sovereignty. Joining it, to make this sovereignty stronger. Because all of us, seen individually, are too small. And I'm not just talking about my home, Luxembourg. Germany is also too small to exist in the world. France is too small, too. They haven't noticed yet, but it's a fact. On a global level, we can only have a voice that is heard and doesn't fall on deaf ears if we stand together. That's what Angela Merkel is after. That's what I'm after, too. So we need more Europe, in particular concerning management of funds.

Let's take a look at the future. When could such a political union become a reality?

It has already become more concrete in the sense that, at the most recent summit, the heads of state and government agreed to an outline of a plan proposed by four presidents on the future of a political union. An interim report is expected in October, a definite timetable in December.

Actually, I believe it will be sooner, because we have to move more quickly than anticipated. So we can draw up a new treaty that puts on record all these possibilities that citizens, too, have a hand in. The European elections are in 2014; that's when citizens can vote for the candidates who support a political union - or not. I believe that by 2015, we'll know what Europe's political structure is going to be.

What is Germany's role in this process?

Germany is a large state. Germany has always been very responsible in taking on a leadership role. Angela Merkel does that with a good amount of calm and vision. I always say, we need Angela; but not only Angela. We are 27 countries in the EU and every one of them must contribute to joining together this continent for the good of all. There can't be a German Europe, but Europe is at home in Germany.

At their meeting on Monday, the 17 eurozone finance ministers will be trying to find a way of replacing a eurozone president who is tired of the job - not the best situation in the middle of a crisis. (07.07.2012)

Despite some progress, it's hard to be optimistic that the recent EU summit was the needed breakthrough that will put Europe on a recovery trajectory as some observers hope, argues Joseph Grieco. (05.07.2012)

German constitutional lawyer Christoph Degenhart has lodged a complaint against the European Stability Mechanism (ESM) and the fiscal pact. He represents the group More Democracy and its more than 12,000 plaintiffs. (02.07.2012)

Angela Merkel received the Order of Leopold from King Philippe on Friday before an afternoon meeting on EU policy with Prime Minister Alexander De Croo. Merkel said the next German government would be "pro-European."