Ways out of a blind alley in Ukraine

Almost one year after the Minsk agreement to resolve the Ukraine crisis, diplomats are working frantically behind the scenes but the two sides are still entrenched. Frank Hofmann reports from Kyiv. 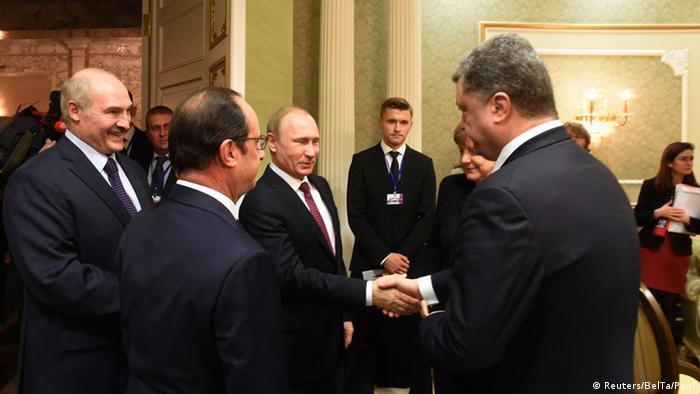 Since the end of Orthodox Christmas in the first week of January, diplomats have again been meeting every Wednesday in Minsk. Also present at the meetings are representatives of the Organization for Security and Co-operation in Europe (OSCE) and moderators from its member states, including Germany and France. Several "working groups" then discuss political and economic questions and breaches of the ceasefire between Ukrainians, Russians, and the Russian-backed rebels.

The OSCE observers have plenty to worry about, because fighting is on the increase again, and weapons are being brought back into the buffer zone. Economic issues are being negotiated with a German representative from the Foreign Office in Berlin as mediator. The rebels' representatives and Russia are mostly demanding an end to Kyiv's economic blockade of the occupied territories. Kyiv points out that "hardly any banks will be prepared to send a security van there full of money" - which could be used to pay people's pensions or social security benefits. Kyiv's argument is that you might as well transfer the money directly to the rebels.

Sanctions as a trump card

The negotiators of the "political working group" meet twice every week. While they're putting in a lot of time, they're not necessarily achieving much in the way of results. These meetings discuss the various points of the Minsk peace accord, which will decide the future of the territories in eastern Ukraine currently occupied by pro-Russian rebels. How should elections be held there in future? What kind of status should the region be given? How can Ukraine regain control of its border with Russia? Nothing has been clarified.

"We need a new impetus to get us out of the blind alley," says a high-ranking Ukrainian diplomat in Kyiv. The Ukrainian president Petro Poroshenko is in Berlin for talks today (01.02.2016). In particular, though, there is talk of the foreign ministers of the so-called "Normandy format" - Germany, France, Russia and Ukraine - meeting again next week, in advance of the Munich Security Conference. Russia's foreign minister Sergey Lavrov was the first to name a date: 08.02.2016.

Moscow wants to get rid of the sanctions the EU and the US imposed on it when the war in Ukraine began. The EU states recently extended the sanctions until the summer. The Kremlin is also said to be prepared to sacrifice the rebel leaders it has been backing in the cities of Donetsk and Luhansk. But all this is rumor.

What's missing are friendly signals from the Kremlin that it's ready to negotiate. In January, Victoria Nuland, the US assistant secretary of state for European and Eurasian affairs, met Putin's close ally Vladislav Surkov - who has been given responsibility for Ukraine - in the Russian enclave Kaliningrad. "We were immediately informed of the results of the talks," says the Kyiv diplomat. However, he adds that Moscow did not put forward any concrete proposals.

"The Kremlin wants to negotiate from a position of strength," says another observer in Kyiv. This explains the recent troop movements by the Moscow-backed rebels. In a written communiqué at the end of January, the Ukrainian foreign ministry stated that, "according to the findings of the Ukrainian security services," weapons had again been transported on freight trains across the border from Russia to the rebels. The Minsk accord of February 2015 should have prevented this. According to the agreement, Kyiv should have been controlling its border with Russia for four weeks already. Right now, though, not even the OSCE observers are able to access all the border crossings.

And Ukraine isn't delivering any more, either. So far, Kyiv has not passed any law that would enable elections to take place in the separatist regions, and constitutional reform with a view to decentralization – which would not only give these regions special status but would also give the confident provinces of western Ukraine greater independence from the central power in Kyiv – has ground to a halt. President Poroshenko was unable to get a three-quarter parliamentary majority in support of the reform. 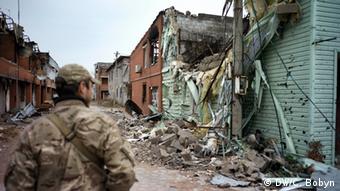 The question of whether the Kyiv rebels will be given an amnesty is also still open. "Only after legal examination," says the Ukrainian foreign minister, Pavlo Klimkin. Moscow wants a general amnesty. The argument has been going round in circles for months at the negotiating tables in the Belarusian capital, Minsk.

"We need clear guarantees now that what is agreed will also be implemented," says the high-ranking Kyiv diplomat. Otherwise the talks will go nowhere. "I want to know what will happen if one side doesn't implement the agreement."

A new timetable, then. Newspapers in Kyiv are already talking about a "Minsk III Treaty," but without much hope of its implementation. After all, the first agreement, made in September 2014, fell apart during what they refer to as the "Russian aggression" and fighting of the following winter, and that led to the German- and French-led negotiations one year ago. The "immediate ceasefire" agreed at the time was only partially achieved more than six months later. They've obviously got used to this state of affairs in Kyiv. There are very few people who still believe there can be a quick solution to the conflict in eastern Ukraine.

President Petro Poroshenko has called for peace to be implemented in Ukraine's east during a trip to Berlin. His demand comes a day before Kyiv's parliament discusses constitutional reform for more autonomy for the east. (01.02.2016)

The vast gulf between Russia and Ukraine

Russia has been sending conciliatory signals to Kyiv, but many Ukrainians are skeptical. The general consensus among Ukrainians is that a revival of the old friendship with Moscow will be difficult. (28.01.2016)