Watercolors Allegedly By Adolf Hitler Go Up for Sale | Europe| News and current affairs from around the continent | DW | 26.09.2006

Watercolors Allegedly By Adolf Hitler Go Up for Sale

Watercolors supposedly painted by Adolf Hitler are to go up for auction in England on Tuesday. Some say they're forgeries, but collectors from around the world have apparently expressed their interest. 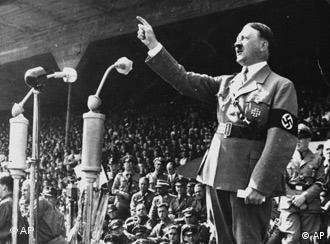 Adolf Hitler apparently painted the watercolors while he was serving in the German army during World War I, after which they were hidden away for more than 60 years.

The 21 paintings and sketches -- mainly portraying landscapes, churches, woodland and houses -- have attracted strong interest from collectors in Russia, the United States and South Africa.

Collectors are unlikely to be the only ones present when the works are auctioned off on Tuesday in the quiet town of Lostwithiel. Television crews ranging from the BBC to Al Jazeera have announced they will report on the event in Cornwall.

"People have been ringing up every day about it," Ian Morris, auctioneer at Jefferys, told Reuters news agency.

Expecting a large audience, the auctioning house switched the sale from its showroom to a local hotel to allow more space for bidders.

"It's very unusual to have that number of Hitler's watercolors up for auction," Morris said. 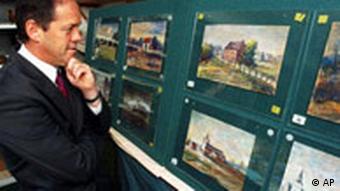 He told German news agency DPA that "if it wasn't for who painted them, they would probably not be worthy of selling."

Art experts have said that the paintings are of moderate artistic merit and remarkable only for the signature they carry: AH or A. Hitler.

Questions have been raised about whether it is appropriate to auction the works of the mastermind of the Holocaust.

"There has been a minority of people who are unhappy," Morris told Reuters. "There are always people who have reservations about what's being sold."

The British newspaper The Guardian wrote that works were likely to be forgeries. "To my eye," wrote art critic Jonathan Jones, "these are crude and obvious forgeries" and "a forger's clumsy attempt to copy the dreary style of one of the world's worst artists."

The pictures are believed to have been painted between 1915 and 1918, on the border of France and Belgium where Hitler was a corporal during World War I.

The artworks were supposedly discovered in 1986, having been stored away in an attic in Belgium for decades.

According to The Times of London, research undertaken in Belgium appeared to prove that the works were indeed by Hitler, but the people who worked on that research had since died, making it impossible to verify their findings.

Jefferys has catalogued the paintings as being "attributed to A. Hitler." 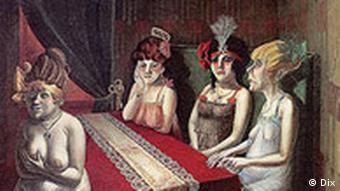 Nazis labelled much art as, including that of Otto Dix, "degenerate"

The sale of Hitler or Nazi memorabilia is a sensitive issue, and larger auction houses with a reputation to defend traditionally steer clear of offering such items.

The upcoming sale has also divided Lostwithiel, where special security measures will be in place during the auction.

"I'd be uncomfortable making money out of them because of who they're by," John Truman, the owner of a local antique shop, told the Times.

For Tuesday's auction, Morris told Reuters that he hoped one or two of the 21 watercolors would sell for more than 5,000 pounds.

As a boy, Adolf Hitler wanted to become an artist, but was turned down twice by Vienna's Academy of Fine Arts. He did, however, continue to paint until the outbreak of war in 1914, and after he returned to civilian life.

The Guardian's art critic was skeptical of both the auction and reporting about it. "In doing this, we help perpetuate a pathetic and horrible market in mementoes of the Third Reich, which falsifies the history of the 20the century," Jones wrote.

A retrospective on Arno Breker will open in Schwerin on July 22. But the show is already stirring controversy because of claims it's an attempt to rehabilitate the artist described as Hitler's favorite sculptor. (16.07.2006)

Just days before the start of the World Cup, a debate about the Nazi-era sculptures that still adorn Berlin's Olympic Stadium has reignited, with calls for the images to be covered up or removed lest they offend guests. (02.06.2006)

Art experts have long been fascinated with the story of Adolf Hitler's dream of creating a huge museum in the Austrian city of Linz. A new book looks at where the Nazi leader's collection came from -- and where it went. (24.08.2005)