Forty years ago, German Chancellor Willy Brandt got down on his knees in Warsaw in a gesture of reconciliation that became a turning point in German-Polish relations. Now, a Jewish Museum is being built near the site. 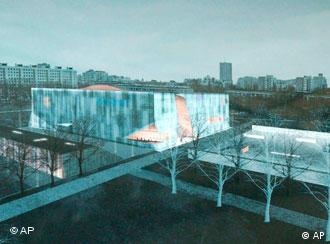 The construction of Warsaw's Jewish Museum is currently the most extensive cultural project in Poland, though few in neighboring Germany even know about it.

The museum is being built in what was the Warsaw Ghetto during the period of Nazi occupation. Nearby is the memorial to the victims of the Warsaw Ghetto Uprising, in front of which former German Chancellor Willy Brandt spontaneously knelt 40 years ago, on December 7, 1970. It was an unprecedented act of humility that would become a milestone in Polish-German ties.

Plans for the Jewish Museum began in 1994 when then German President Roman Herzog got behind the project and oversaw the launch of a development foundation to fund it. Though the idea for the museum initially came from Poland, the country lacked the necessary resources at that time.

"Roman Herzog suddenly endorsed he idea," said Josef Thesing, chairman of the development foundation. "Our foundation was started in order to make the idea a reality. If we hadn't managed to secure funding from the beginning, it never would have happened."

So far, the foundation has managed to acquire some 6 million euros (about $8 million) for the museum project; by its completion in 2013, costs are expected to total 90 million euros.

Thesing added that Germany had a moral responsibility to invest in the Warsaw museum.

"I think that we can demonstrate that there is a different Germany now," he said. "And, together with Poles - who are now our friends in the European community - we can work through our past instead of denying it and look, with our unique perspective, toward a common future."

Chancellor Willy Brandt's humble gesture at the memorial to the victims of the Warsaw Uprising in 1970 was unplanned, but went down in history

The path to the future leads first through the past. Few Poles are aware that the first known reference to their country was made in Hebrew. Poland's Jewish roots go back a thousand years, according to Auschwitz survivor Marian Turski.

"We have no Jews in Poland - almost no Jews. The Jews are present in history, they're present in literature but there's a vacuum in society, hence, the interest in those topics," said Turski. "This is why we estimate that this will be one of the most-visited museums in Poland."

It was Marian Turski who conceived the idea for the museum in the early 1990s. He chairs Poland's Jewish Historical Institute and is now chairman of the Jewish Museum as well.

For Turski, there was only one possible location for the museum: the site of the Warsaw Ghetto and Willy Brandt's 1970 gesture of reconciliation.

"For a long time, as the chairman of the Jewish Historical Institute, I was the owner of this land," said Turski. "It was obvious to everybody that there was no better and no more appropriate place than this to build the museum."

It wasn't until a year and a half ago that construction finally began, under the auspices of museum director Jerzy Halbersztadt. He said its completion, planned for 2013, would be a new landmark in the often difficult relationship between Germany and Poland.

"The construction of this museum is a very important turning point," he said. "It cannot transform the whole country, but it will be a sign of the changes that took place in the last 20 years of democratic development."

The museum won't focus solely on the Holocaust, but will span from the very beginning of Poland's Jewish roots to the present day.

That includes the Kielce pogrom of 1946, when townspeople and officials in the Polish town turned against the Jewish community, killing around 40 people. The anti-Semitic sentiment that sprung up in the late 1960s is also to be addressed, as is the gradual return of Judaism in post-communist Poland.

"Our mission is to reach those who don't understand what it means in the contemporary world to have an open dialogue, revisit history, tell the truth about history whether it's nice or not," said Halbersztadt. "Those who are not convinced today will be convinced tomorrow, I believe that."

The museum director is expecting some half a million visitors per year to come and contribute to a new understanding of history in the country.

During the Holocaust, more than 20 million people were subjected to forced labor - a crime that remained unspoken for many years. This week, the Jewish Museum in Berlin opened a comprehensive exhibition on the issue. (29.09.2010)

The President of Germany's Central Committee of Jews, 77-year-old Charlotte Knobloch, will not seek re-election in November, paving the way for a younger successor with no personal experience of the Holocaust. (08.02.2010)