Germany and Poland have a long list of grievances; the longest running being the quest for compensation by Germans expelled from Poland after 1945. But is the topic just political ammunition for a nationalist agenda? 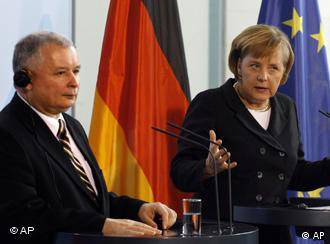 Merkel and Kaczynski reaffirmed familiar stances during their meeting on Monday

Polish Prime Minister Jaroslaw Kaczynski's first official visit to Germany was always going to be a testing affair. Relations between the two neighboring countries have been strained in the months since Jaroslaw and his president twin-brother Lech took control, with the Kaczynski brothers accused of exploiting old grievances in the elections that brought their Law and Justice party to power.

While new divisive topics have recently been added to the list, such as Germany's new "Ostpolitik," or eastern policy, focused on closer economic, social, cultural and trade ties with Russia, Poland's leadership continues to muddy the choppy waters of German-Polish relations by pursuing a grievance which has been festering for nigh on sixty years.

The subject of restitution claims by ethnic Germans forcibly expelled or displaced from Poland at the end of World War II came to the fore again ahead of Kaczynski's visit when the Polish prime minister called for the "misunderstandings" that have brought relations between the countries to their lowest point in many years to be resolved. 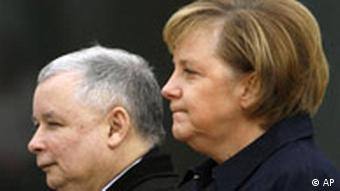 Kaczynski's Berlin visit was always going to be tense

Kaczynski believes that the only resolution of this problem is for Germany to renounce all property and compensation claims. During his visit to Berlin Monday, he also raised the possibility of a formal treaty to cement Berlin's position of non-involvement with private compensation cases and bar individuals from launching lawsuits.

Germany sees no need for treaty

Speaking after meeting with the Polish prime minister, Chancellor Angela Merkel repeated the German state's vow never to make any claims against Poland, but firmly rejected Polish calls for a formal treaty. "I am against such a treaty because it would complicate things," she said.

Kaczynski countered that his government firmly believes such a treaty would help improve ties. "We need such an additional resolution."

It is estimated that almost 660,000 Germans were forced to leave Poland after 1945, leaving property and possessions behind.

Around16.5 million Germans were forced to flee the expanding Soviet states after the war in the largest post-war migration orchestrated by the victorious Western Allies and the Stalinist Soviet Union. Those who either migrated or were expelled included both true German citizens, some of whom had gained their German citizenship during Nazi occupation, the people simply considered ethnic Germans and those wishing to escape from communist regimes. 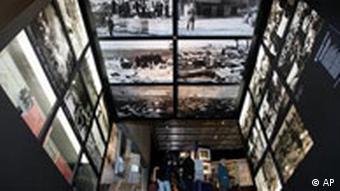 Those individuals pursuing cases in the German courts claim that the expellees from Poland were given less than 24 hours notice of their expulsion by the authorities to prevent them from organizing the sale of their properties or the removable of their possessions.

Despite the issue's increase in prominence in the context of German-Polish relations over the past year, neither government is engaged in the reparation process.

No government involvement in compensation cases

The German government maintains that it has no property claims on Poland, that the borders between the two countries are recognized and that surviving expellees and relatives of those who have since died are pursuing compensation cases in German courts without government assistance.

The current coalition government has stated that it is following the agreement made between former chancellor Gerhard Schröder and his Polish counterpart in 2005 that promised neither government would support restitution claims pursued by individuals in either country.

However, the Kaczynski brothers are skeptical and have voiced concerns that the majority of expellees, who settled in southern Germany, now represent a significant political lobby with close ties to Chancellor Angela Merkel's conservatives. 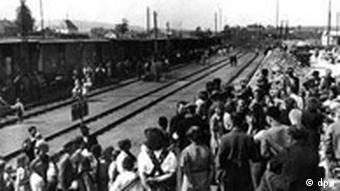 Expellees left with what they could carry

Their suspicions of government support for the German claims increased when the German Federation of Expellees opened an exhibition in Berlin in August depicting the fate of the hundreds of thousands of ethnic Germans forced out of Poland. Prime Minister Kaczynski accused the exhibition of "equating the victims with the persecutors".

Restitution a private not political issue

But if neither government wants to pursue the restitution claims, is there really an issue at stake or is the expellee grievance just a political tool which is being exploited in Poland for domestic gain?

"Some Polish politicians could not resist the idea to use the topic to establish nationalist support in Poland, particularly in election times," said Klaus Segbers, professor for political science at the Institute for East European Research at Berlin's Free University. "Now elections are over, the government has been elected, and this issue should be put to a rest."

"Besides, the issue of restitution is not a major one," Professor Segbers added. "It is definitely not a government issue; German governments of different political colors have made it clear repeatedly that they do not support these kind of private demands. It is the right of citizens to go to court and to raise the issue but in this sense it is a civil and private issue not a political one."

The view is echoed by Elena Klode from the East European Research Institute in Lodz in Poland. "There is no political will to get involved in a full scale diplomatic crisis over the restitution claims," she said. "There would be no winner if both governments decided to increase the stakes. The arguments may go on but eventually there will be an accord with which both sides are satisfied. There are a lot more serious topics to discuss such as the EU, international terrorism and energy."

"The private cases will go on but they continue to have no political agenda. People want what they think they deserve. The political relationship between Germany and Poland will eventually heal over this even if the claims go on."

Professor Segbers also believes that neither side has anything to gain from pursuing the issue of restitution. "The whole issue should be abandoned by everyone involved. We have had similar discussions about slavery, colonization and the like," he said.

"These things were terrible but you cannot gain higher justice by digging all this up and putting a price tag onto it. There would just be a mutual chain of claims, with no end in sight."

Following a series of controversies that cloud German-Polish relations, Poland's premier visits Berlin Monday. Relations at the top level remain icy, but young Poles seem to have a more positive view of their neighbors. (30.10.2006)

Impatient with politicians' ongoing beef over this dark chapter in German-Polish history, a group of students is offering tours of western Poland designed to help war-time expellees come to terms with their past. (22.10.2006)

From the "potato" satire to Günter Grass' confession, politicians and newspapers in Germany and Poland have had plenty of tomatoes to throw in the past few weeks. DW-WORLD.DE takes a closer look at the ramifications. (24.08.2006)