Prominent lawyer Wang Quanzhang told DW that the government kept him in jail for four and a half years without a fair trial and a real case against him. Chinese authorities accused Wang of "subverting state power." 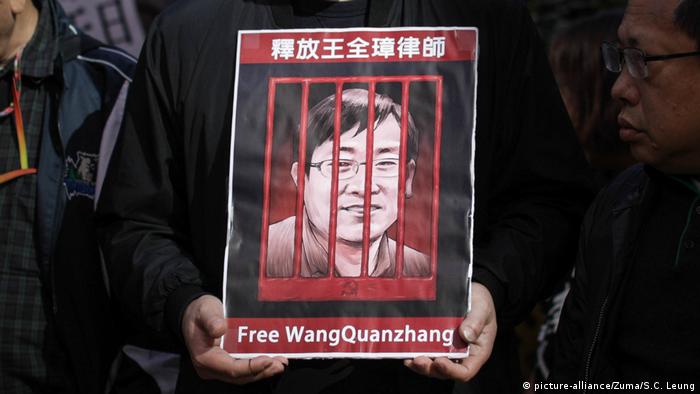 Wang said that although he had been released, authorities were moving him to his former residence in the eastern city of Jinan for two weeks as a precautionary measure against the novel coronavirus, according to Li Wenzu, Wang's wife.

Human rights groups have described the measure as a tactic to isolate the renowned human rights lawyer.

Wang regularly represented prominent political activists, victims of land seizures and artists, including Ai Weiwei. In August 2015, he was arrested and held incommunicado until receiving a prison sentence during a closed-door trial last year.

He was one of more than 300 lawyers and activists who were arrested during the sweeping "709" crackdown launched on July 9, 2015.

In an interview with DW, Wang accused judges of unlawfully imprisoning him and violating Chinese laws.

DW: Now that you are released, how do you look at your case and the time spent in prison?

Wang QuanZhang: The judges randomly charged and sentenced me. They first tried to charge me for "creating disturbance," but later indicted me for "state subversion." Before charging me, the prosecutor said that "we spent a year and a half to determine that your crime is subversion of state." They did not tell me which law I actually violated.

I merely participated in some events between 2009 and 2011, so I didn't know what the logic was behind their charges against me. I asked prosecutors whether I was targeted for my speeches or my behavior. They said the charges were related to my behavior. As they charged me with state subversion for posting material on Weibo, I asked them what was illegal about it. They replied that the mere "act of typing" on Weibo constituted state subversion. I was just speechless at their response.

If Chinese authorities want rule of law in the country, they need to stop abusing power. They can't expand their power while limiting people's rights. It is a ridiculous situation.

How did your imprisonment affect your family and other people close to you?

I was afraid that something bad could happen to them. I was also worried that the authorities could pick them up because of me. At the same time, I am thankful for everything they did for me, because it made me safer.

As a wife of an imprisoned citizen, my wife exercised her right to hire a lawyer for me and demanded her right to visit me in prison. But the authorities did not allow the lawyers to meet me.

I was imprisoned in four different detention centers, and two unknown locations. Most of the defendants in my case were released as local officials said we didn't commit any crime. However, the judges still kept bringing up cases to use them as evidence of my crime. It is alarming that the court of law tries to find a way to prosecute someone that the government wants jailed.

First, I want to reunite with my wife and son, then I will think about my next step. As I had also been deprived of my civil rights for five years, local law enforcement agencies are using it to ban me from entering Beijing. Although there is no legal precedent for such a decision, they still want to continue the ban.

Currently, I am stuck in Jinan city. Previously, the authorities told me I needed to be quarantined for two weeks because of the COVID-19 pandemic, now they say I still can't go to Beijing due to the Two Sessions [a meeting of legislative delegates and political advisers]. They can come up with any excuse. I will keep fighting for my rights.

I still feel a bit disconnected from the outside world, so I need some time to adjust. While I have some minor health issues, I am mostly fine.

The interview was conducted by William Yang. It has been condensed and edited for clarity.