Wall of Light Could Take Place of Berlin Wall

A spectacular laser wall of light, pinpointing where the communist-built Berlin Wall used to weave its way through the heart of the city, is in the planning. 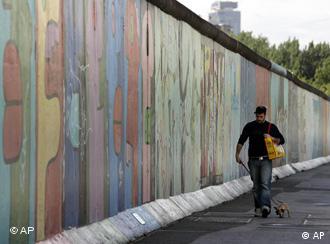 Christian Dirks, a 35-year-old historian, along with architect Dirk Buecke, curator Catherina Mertens and light designer Sascha Hinz -- want the laser project realized by the time of the 20th anniversary of the barrier's destruction on Nov. 9, 2009.

Ever since Berlin's famous landmark was dismantled in 1989, the Berlin authorities have been in a quandary over the most suitable way of remembering the oppressive, grey 155-kilometer-long (around 96 miles) barrier, which not only sliced the city in half but also surrounded its western border for nearly 30 years, between 1961 and 1989.

"People would be able to pass through the wall of light without hesitation, symbolically, reliving the moment of the barrier's demise," explained architect Dirk Buecke, who said the idea would involve erecting 3.6-meter-high (12 feet) steel elements equipped with laser projectors, every 100 meters or so. 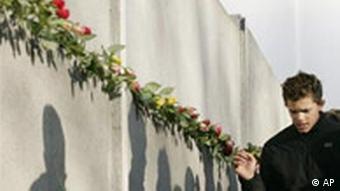 One memorial to those who died

"The lights will illuminate the spot where the wall once stood, as well as the immediate border area. On roads that now link east-west Berlin, narrow strips of light at a height of 3.6 meters and at ground level will show the route of the wall," Buecke said.

Dirks said the group project would not be an isolated art happening.

"The idea is that it should be harnessed to the overall concept of events linked to the wall's 20th anniversary," Dirks said.

Pastor Manfred Fischer, chairman of the city's Bernauerstrasse Wall Memorial site, said Berlin is the right location for the "Wall of Light" idea. The project is expected to cost 1.2 million euros ($1.54 million) if realized and run for six weeks, starting Nov. 9, 2009, if approved by the city government.

Reiner Klemke, a Berlin city government culture official, said it was an interesting and realistic art project, but warned that it must in no way be a" glorification of the Wall."

Plans relating to the Wall of Light project are currently being displayed at an exhibition called "City of Transformation, City of Ideas," at the Galerie Aedes in Berlin. 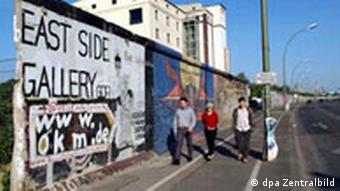 Some segments of the wall are still standing

Few wall remnants remain. One exception, along with an East Berlin watchtower, stands at the old Checkpoint Charlie crossing point among a conglomeration of new office blocks designed by American architects. Other segments of the wall are situated near the Gropiusbau museum in Berlin's Mitte district.

The spectacular East Side Gallery stretch of wall, which was illustrated by a host of German and foreign artists in 1989-90, runs along the water in the eastern Friedrichshain district. But this site was never part of the original barrier, serving only as a secondary barrier.

Ever since the wall was torn down in 1989-90, foreign tourists visiting Berlin have complained that they have trouble finding any trace of the barrier, which caused so much misery for the Berliners during the Cold War era and led to many people being killed trying to flee to the West. 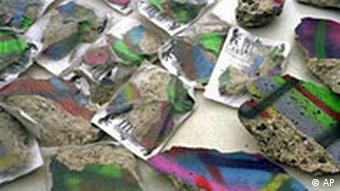 Fragments of the wall are sold as souvenirs

The city's main wall memorial site is at Bernauerstrasse, a city street cut in half by the border and where, after the construction of the barrier, desperate East Berliners tried jumping to the western side from houses backing on to the west.

But its location is some distance from the city center, leading sometimes to it being overlooked by tourists.

Events marking the 17th anniversary of the Wall's 1989 demise were held in Berlin Thursday.

The Berlin Wall's Checkpoint Charlie border crossing came to symbolize the Cold War divide. Now, it is home to a memorial of the division of Berlin, putting a face on those who risked their lives to leave communism. (13.08.2006)