Euro 2016 has been an opportunity for many fans to bring their own party to France, and much like the Irish and Icelanders, the Welsh brought a blaze of color and a tune or two to the likes of Bordeaux, Lille and Lyon. 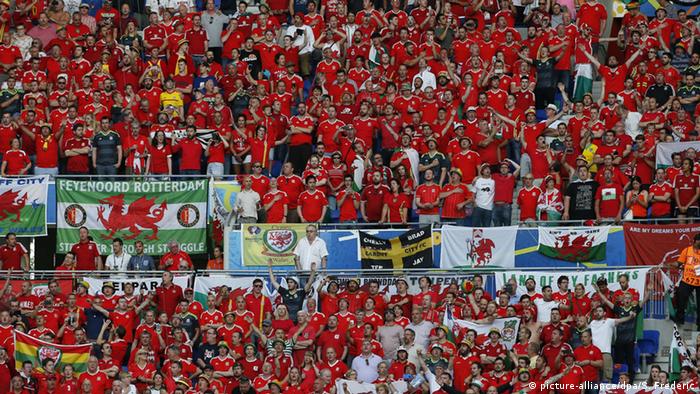 Wales may have exited the tournament after a 2-0 loss to Portugal but for the men, women and children in the stands, Wednesday night was still a night to remember.

"The atmosphere [in Bordeaux] was electric. There was sort of a 'it’s just nice to be involved' kind of feeling. But when we beat Slovakia [in the group stages], of course you start thinking,” said Wrexham and Wales fan Andy Marshall.

"You're reminded of those terrible qualifying campaigns over the years, when we were out of the running after three games and lost 5-0 to Serbia at home," he added. "Having a team of mine doing so well, it's odd. I guess it's how Leicester fans felt for 10 months."

While Wales’ exceptional run didn’t end in the same remarkable way as Leicester’s, the Welsh story was still one for the football ages as Chris Coleman – a man whose own career was in need of reviving when he took the job– guided his team to within one game of the final.

Thousands of Welsh fans joined Andy in the journey to Lyon for the clash against Portugal, and earlier in the day, by the time the sun started to dip and the crowds had moved from city to stadium, the mood was different. Gradually, the end of the stadium bathed in red started to take in what their nation was on the verge of achieving. Behind the collective wave of clapping arms and proud voices surged a wave of doubt about whether a fairytale ending was achievable. The underdog had been touched by success and couldn’t shake the addictive taste.

The Portuguese fans grew louder. Perhaps the magnitude of the game was dawning on the Wales players too. Joe Allen stumbled with a couple of touches.

Almost childlike in the way he pursued victory, Cristiano Ronaldo became the target of Welsh angst. Every time he failed, the Welsh fans were there to rub it in, as Portugal’s number seven complained his way through the opening stages.

Portugal’s coach Fernando Santos told his team to be calm, while being anything but himself. The Welsh corner continued to flit between a raucous party atmosphere and trembling apprehension.
Like the life support machine he has so often been for his country, Bale was his side's heartbeat. The crowd, accompanied by a trumpet-led band, believed a little more with every gallop their star man embarked on. He surged, they cheered. He unsuccessfully struck for goal, they erupted into a sea of clapping hands anyway.

Then came Ronaldo. The leap, the header, the eruption. It had to be him. Before Wales fans could finish their chant of "Don't take me home", it was two. A double blow. And, as it turned out a lethal one.

The Portugal fans were suddenly a bouncing blur of red and light green. Wales fans were stunned as the sounds of "Oh, Portugal" rang around the stadium. The Wales supporters roused a few more songs, but they couldn’t hide their disappointment. Perhaps in the morning, their achievements would become clear but in that moment perspective couldn’t be found.

Portugal fans launched their best impression of Iceland's clap. The Welsh tried to drown it out, but their voices were quieter now.Wales defender Chris Gunter urged the crowd to recapture their earlier mood. There were 20 minutes left.

“With Bale in attack, with Bale in attack, watch out Europe, we’re on our way back,” the crowd tried to sing once or twice during the game, but like their main man, they faltered. Wales were out of Europe but this tournament has shown they are on their way back as a footballing power. 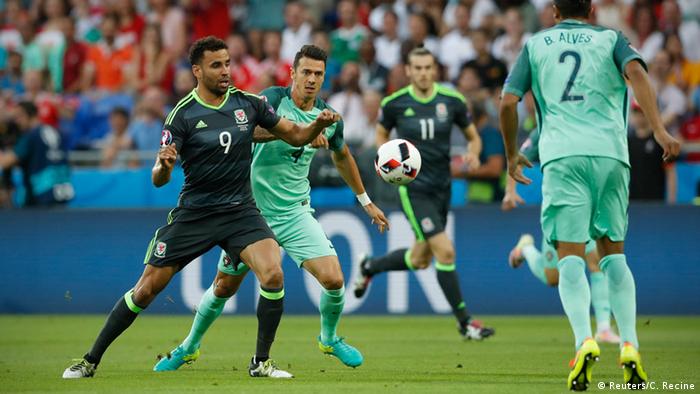 Cristiano Ronaldo made the difference for Portugal

"Cristiano Ronaldo," came the cry from the Portuguese fans, suggesting the entire Portugal section was smiling wryly. On the night, he proved the difference.

On the pitch, the Welsh dragon finally ran out of fire against a stubborn and destructive Portugal team, but the Welsh supporters never stopped. With the result all but confirmed, 'Land of my Fathers' echoed around the corners of the stadium. The feeling of frustration ebbed away as pride burst through for one final flourish.

The passion of the underdog is infectious. Many leaving stopped to watch and film as the Welsh team applauded their fans and were applauded in return. It was an emotional finish to a tournament they never wanted to end.

On the way out, one Wales fan said to another. "We'll always have Lille.” They'll always have more than just that win over Belgium, they’ll have a whole tournament of memories.